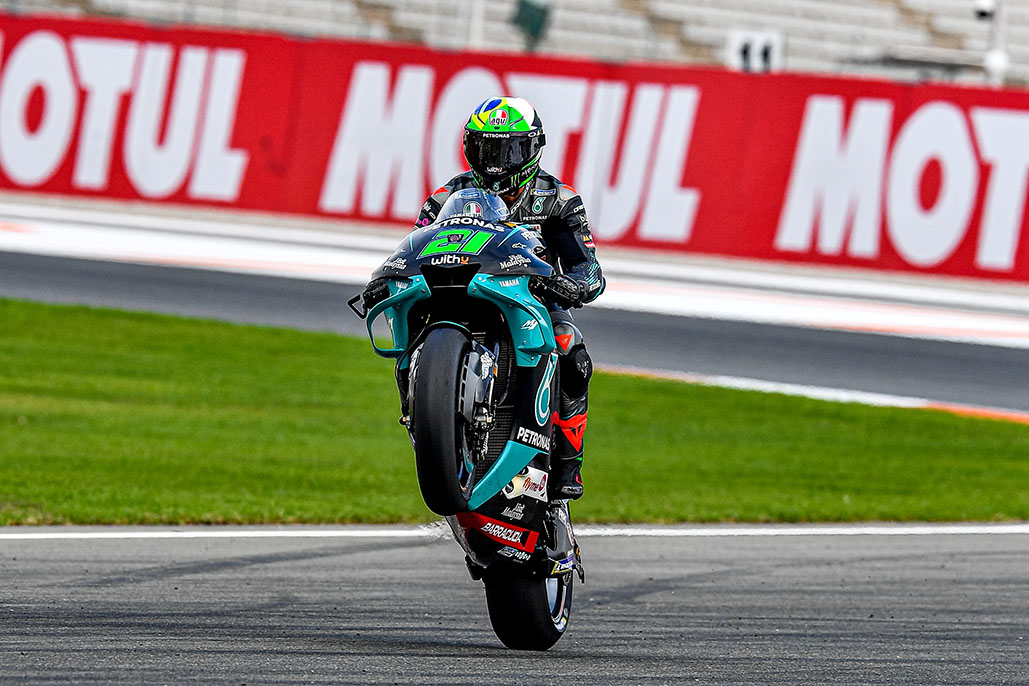 The Italian balances risk vs reward for a second MotoGP™ pole, with Quartararo 11th, Mir 12th and Rins 14th after a Saturday shake-up.

Franco Morbidelli left it late, but the Italian pitched it to perfection to take his second MotoGP™ pole position at the Gran Premio Motul de la Comunitat Valenciana. Friday’s fastest Jack Miller (Pramac Racing) was pipped to the post by less than a tenth, with Takaaki Nakagami (LCR Honda Idemitsu) completing the front row once again – both men candidates to become that record-breaking tenth winner of the year and starting from the front. There were some big headlines slightly down the order too as Championship leader Joan Mir (Team Suzuki Ecstar) took 12th, Fabio Quartararo (Petronas Yamaha SRT) 11th and Alex Rins (Team Suzuki Ecstar) only 14th as none the top three in the standings managed to make it onto the first three rows… setting up another rollercoaster Sunday.

It began in a tense Q1 packed full of key players, including the men second and third in the Championship – Quartararo and Rins – as well as Andrea Dovizioso (Ducati Team) and Valentino Rossi (Monster Energy Yamaha MotoGP). Big drama hit on the timesheets for Rins as he ended the session fourth and therefore 14th on the grid, and big drama hit on track for Alex Marquez (Repsol Honda Team) as the Spaniard had a huge highside right in front of Brad Binder (Red Bull KTM Factory Racing). Thankfully the South African took quick evasive action and the number 73 got to his feet, even able to head back out on his second bike.

Binder, at the time, was top of the pile too and no one could overhaul his lap. He moved through along with Quartararo, with Rins left in 14th, Rossi 16th and Dovizioso 17th after a difficult session at the office for a good few famous faces.

After the first runs in Q2, it remained advantage KTM. Binder was on provisional pole and Miguel Oliveira (Red Bull KTM Tech 3) in second as Mir languished down in tenth, but there was more to come. Pol Espargaro (Red Bull KTM Factory Racing) added to the KTM party next as he slotted into second once the final shootout was on, before Maverick Viñales (Monster Energy Yamaha MotoGP) then suddenly shot straight to the top.

Still, it wasn’t done. Mir had got himself up to seventh but the man on the move was Miller as the Australian slammed in a lap that saw him take over on provisional pole, backing up his Friday speed with another impressive Q2. That was with two minutes to go and it seemed it could be his – but one man wasn’t quite done, and that man was Morbidelli.

The number 21 said Saturday, on an overcast day after some minor rain earlier on, was a balance between risk and reward and the Italian walked the tightrope to perfection. Right at the end of the session, his red sectors kept rolling and he eventually crossed the line to deny Miller by less than a tenth, taking his second MotoGP™ pole position ever and of the year. Nakagami then took his second front row in a week, slotting into third, making a front row with three different manufacturers, and not one of the top three in the title fight in sight…

Fourth went to an impressive Johann Zarco (Esponsorama Racing) as he moved up to take over as the second Ducati in the session, with Pol Espargaro – last week’s polesitter – forced to settle for fifth. Sixth is where Viñales was eventually shuffled down to, but it’s a lot further forward than the Yamaha rider’s pitlane start for exceeding his engine allocation last weekend. What can he do?

Seventh saw Aleix Espargaro put his Aprilia Racing Team Gresini machine in the mix to head up the third row, ahead of Francesco Bagnaia (Pramac Racing) as the Italian continues to show solid speed at Valencia. Binder completes Row 3, the South African getting shuffled down late on, as did Miguel Oliveira as the Portuguese rider completes the top ten.

So where are the key players in the title fight? Rins’ work was over early as he didn’t make it out of Q1, but it couldn’t have been much better news for the number 42 as the flag flew for Qualifying 2. Mir is only two places ahead of him, in 12th and last in Q2, with Quartararo only managing one better. But then we’ve seen many a Suzuki comeback on Sunday as the Hamamatsu factory slice through the field…

A podium would be enough for Mir to lift the crown. Past that it’s a maths game – and everything will be on the line as the top three blast away from 11th, 12th and 14th. Miller and Nakagami, meanwhile, have the chance to become that tenth winner from the front row – as do Zarco and Pol Espargaro right behind them. What will Sunday bring? Tune in to find out as MotoGP™ chase more history at 14:00 (GMT +1).

Franco Morbidelli: “It’s been a great weekend so far, we’ve worked very well, we were able to immediately improve the rhythm compared to last weekend’s race. The qualifying was a bit of strange one because the conditions weren’t so easy and it was important to have a good amount of risk in order to make the laptime. I managed to do it, because I feel great with the bike I managed to risk it. I’m happy, now it’s important to get a good start tomorrow and make a nice race, in whichever position we are, and try to collect some points!”