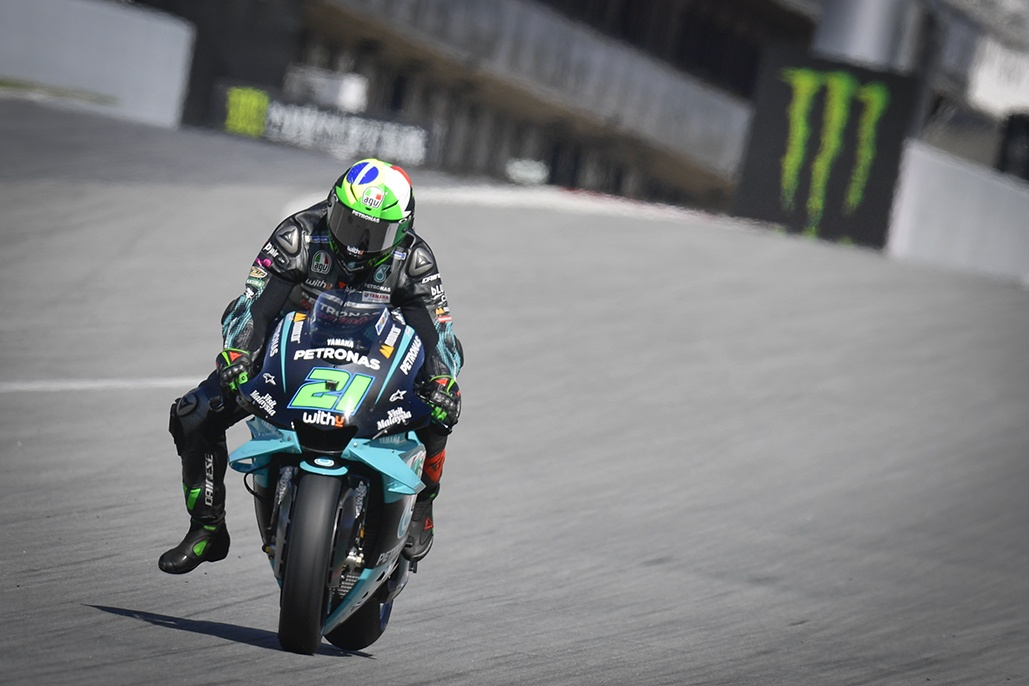 On form on Friday, both the Italian and Zarco bounce back from crashes to head the field – as Binder leaps up the timesheets to complete the top three.

Franco Morbidelli (Petronas Yamaha SRT) was struggling with illness the week after his incredible maiden MotoGP™ win in the San Marino GP, but now he’s back – and back on top. The Italian shot to P1 in the afternoon on Friday to rule the roost, a tenth ahead of Johann Zarco (Esponsorama Racing), with rookie Brad Binder (Red Bull KTM Factory Racing) searing up to third by the end of the day’s action.

FP1
The morning, however, belonged to Fabio Quartararo (Petronas Yamaha SRT) as the Frenchman went faster and faster to end the session over four tenths clear of nearest rival Andrea Dovizioso (Ducati Team). Dovizioso, in turn, was a couple of tenths clear of Joan Mir (Team Suzuki Ecstar) down in third, and the two spent a while together on track, whether by accident or design.

It was an uncharacteristic start to the event for Mir just before that, however, as the Spaniard crashed at Turn 5 unhurt, although upon getting back on the Mayorcan went quicker.

Fourth place went the way of Maverick Viñales (Monster Energy Yamaha MotoGP) as last week’s winner was just 0.045 off Mir, that making the top four in the title fight also the top four in FP1. Aleix Espargaro (Aprilia Racing Team Gresini) was less than a tenth off Viñales, in an impressive fifth.

As well as Mir’s crash, there was a tumble for Iker Lecuona (Red Bull KTM Tech 3) at Turn 2, rider also ok.

FP2
In the much windier afternoon, Morbidelli made sure Petronas Yamaha SRT were top in both sessions of the day. Morbidelli, Binder and Rins all rose into the top four to slot in behind FP1 pacesetter Quartararo initially, with Viñales and Rossi also improving their times. After the first few bouts, Dovizioso, Quartararo, Mir and Aleix Espargaro were the only riders inside the top 10 who hadn’t gone faster in the first 15 minutes of FP2.

Morbidelli was then down at Turn 10 – unhurt – with 24 minutes to go. Before that, Zarco also crashed at Turn 5 – rider ok – and Repsol Honda Team’s Stefan Bradl also went down, the latter at Turn 2. Lecuona later suffered a second crash of the day. Wind or grip? The session was certainly a tougher one in terms of tumbles.

Heading into the final 10 minutes of FP2, there were 12 riders within a second and with automatic entry to Q2 already on everyone’s minds, that meant one thing – cue the time attacks!

The first benchmark came from Binder as he leapt up from outside the top 20 in FP1 to lead the way, four tenths clear. Morbidelli and Zarco were on a charge but lost those laps after Yellow Flags for Lecuona’s crash, but next time around the duo became the first and only riders into the 1:39s, demoting Binder to third overall. Viñales also struck late to slot into fourth, ahead of Takaaki Nakagami (LCR Honda Idemitsu). Every rider bar three improved their time in the afternoon by the time the flag came out: Dovizioso, teammate Danilo Petrucci and Quartararo were the outliers.

Overall then, it’s the FP2 fastest five of Morbidelli, Zarco, Binder, Viñales and Nakagami who are also fastest overall, with Quartararo’s FP1 time slotting him into sixth on the combined timesheets. That shuffles Mir down to P7 overall, ahead of Pol Espargaro, Alex Marquez and Rossi. The latter duo are the most successful on the grid at the track across all classes, with three and five wins, respectively.

Next up is another group who all improved, but remain outside the top ten: Rins is 11th and the first man looking to move forward in FP3, ahead of Jack Miller (Pramac Racing), Crutchlow and Aleix Espargaro.

Dovizioso, who didn’t go faster in the afternoon, ended the day in P15 overall. For him more than many, FP3 is a chance to shoot back towards the top and it starts at 9:55 (GMT +2). Will he make it through? Find out then, and tune in for qualifying from 14:10 as the grid for the Gran Premi Monster Energy de Catalunya gets decided.