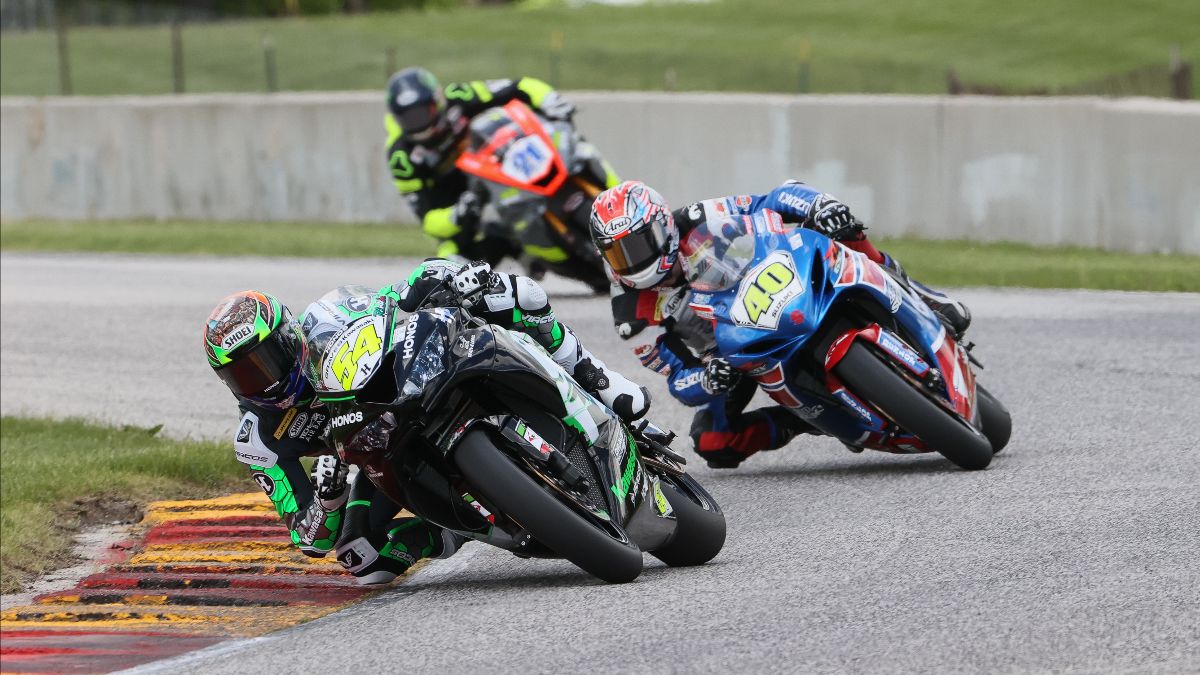 If you remove Richie Escalante’s two runaway wins in the Supersport class in the opening round of the 2020 MotoAmerica Series at Road America at the end of May, the combined margin of victory for the other support classes on a sunny weekend in Wisconsin was a scant .168 of a second. Yes, .168 of a second.

All that close racing happened without fans in the season opener, but this weekend’s action will take place with fans at the picturesque four-mile-long racetrack in Elkhart Lake as MotoAmerica becomes the first motorcycle series in the U.S. to host fans post COVID-19 shutdown.

Like the premier HONOS Superbike class with Cameron Beaubier’s first-round domination, the Supersport Series opener also featured a double winner with HONOS Racing’s Escalante starting his season off with a bang with two race victories on his new Kawasaki ZX-6R. Escalante topped Celtic HSBK’s Brandon Paasch in race one by 11.5 seconds and M4 ECSTAR Suzuki’s Sean Dylan Kelly by 16.1 seconds in race two to complete his perfect weekend. On track, Paasch was second both times out, but he was disqualified from race two when his Yamaha YZF-R6 was found to be under the mandatory weight limit. Kelly, meanwhile, had his troubles in race one when he crashed out.

With his two closest competitors each failing to score points in one of the two races, Escalante leads the championship heading into this weekend’s Road America 2 by 24 points over the surprising Nate Minster. Minster and his TSE Racing Yamaha finished fourth in each race and he ended the weekend four points clear of Kevin Olmedo in the championship chase. Olmedo earned his first Supersport podium in race one but slipped back to 10th in race two. Paasch and Kelly are tied for fourth – 30 points behind Escalante.

But it seems as though no one reminded Dominic Doyle of that.

Doyle won both races over the course of the weekend – by the slightest of margins. On Saturday, the South African beat Landers by .078 of a second. On Sunday, it was even closer with the BARTCON Kawasaki besting Landers by a Bond-like .007 of a second. For those not keeping track, that translates to Landers and his Landers Racing Kawasaki missing out on victory in two races by a combined .085 of a second.

With his two wins, Doyle goes back to Road America with a 10-point lead on Landers. Third place is held jointly by Benjamin Gloddy, the New Hampshire resident ending up fifth and third in the two races on his Quarterley Racing/On Track Development Kawasaki and Celtic HSBK Racing’s Samuel Lochoff, who mirrored Gloddy’s results with a third and a fifth. Westby Racing’s Cody Wyman heads to Wisconsin for round two tied for fifth in the point standings with Rodio Racing’s Gus Radio.

Just when you thought things couldn’t get closer than .007 of a second, they did. In Saturday’s opening round of the Twins Cup Series, 1833CJKNOWS’ Kaleb De Keyrel won by just .002 of a second. And guess who was second? Yes, it was Landers – in his Twins Cup debut on the Roadracing World Young Guns/Sportbiketrackgear.com Suzuki. On Sunday the same two went at it again – this time joined in the battle by Robem Engineering’s Jackson Blackmon. Believe it or not, Landers again came up short. Just short. Like .082 of a second short and that put him in third place as Blackmon beat him to the line by just .001 of a second. So in four races, Landers lost out on victory by a combined margin of .169 of a second. We have a feeling that Landers might show up for round two just a bit fired up.

With De Keyrel 14 points ahead of Landers heading into round two, Blackmon is third, a further five points behind. Jason Madama, who put his Syndicate Racing/Apex Assassin’s Yamaha on the podium in race one, is fourth in the points and five points clear of his friend/rival Chris Parrish.

PJ Jacobsen made his Stock 1000 debut a successful one, the Celtic HSBK Racing Ducati rider beating Altus Motorsports’ Cameron Petersen and his Suzuki GSX-R1000 by 4.26 seconds with Ride HVMC Racing’s Corey Alexander third on his Kawasaki ZX-10R. Mesa37Racing/Tango’s Stefano Mesa and Michael Gilbert Racing’s Michael Gilbert rounded out the top five with the Stock 1000 class only having one race in the opener.

MotoAmerica has upped the minimum weight requirement for the Ducati Panigale V4 R to 180 kilograms from 170 kg in the Stock 1000 class, effective immediately. PJ Jacobsen rode the Celtic HSBK Ducati to victory in the Stock 1000 class in the opening round of the series at Road America and will have to race with 22 pounds added to the Panigale for round two.

The largest grid for round two at Road America? That would be the Twins Cup class with 28 of the twin-cylinder motorcycles entered for the second round of the MotoAmerica Series. Stock 1000 features the second highest entry with 23 followed by Supersport with 22 and Liqui Moly Junior Cup with 20. The premier HONOS Superbike class will feature 24 entries for Road America 2.