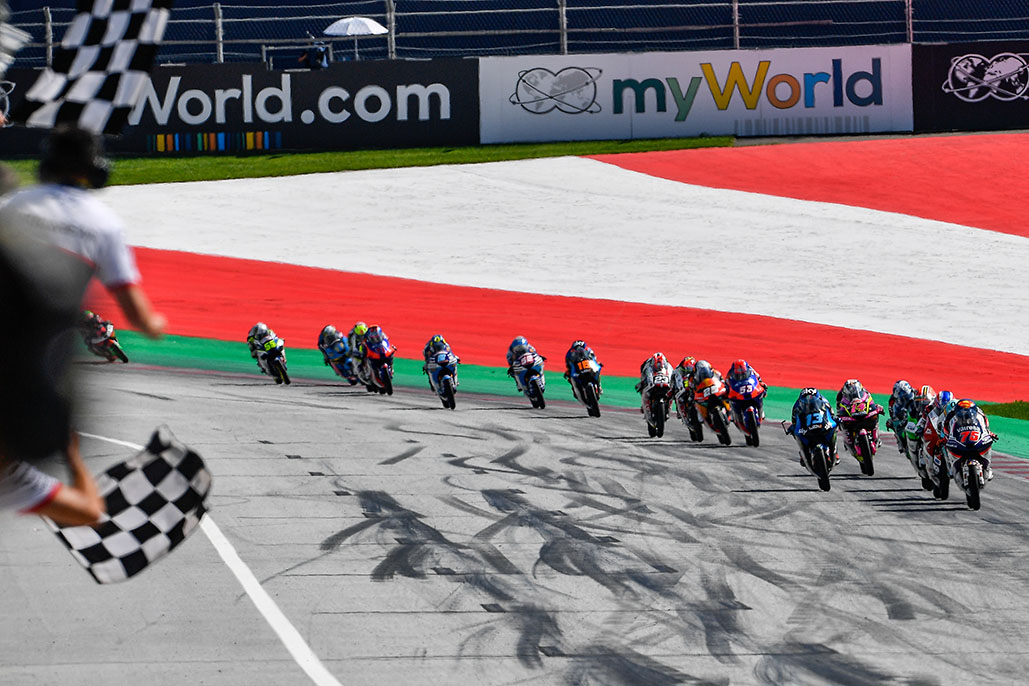 Our particular brand of lightweight class, glorious chaos descends on Misano – with the grid aiming to reel in leader Arenas once again.

Austria gave us two more barnstormers in the lightweight class, and we wouldn’t expect anything less. Now the Moto3™ grid are ready to get back in action for the Gran Premio Lenovo di San Marino e della Riviera di Rimini, and we can be sure it’ll be another incredible show as the grid attempt to gang up on Albert Arenas (Gaviota Aspar Team) once again. The Spaniard remains firmly in charge of the standings on the way in though, and probably still the pre-race favourite courtesy of his stunning 2020 form so far.

Last time out however, Arenas didn’t get it all his own way and couldn’t quite get on the podium. The man closest behind him in the points did though, and Ai Ogura (Honda Team Asia) will be aiming for a rinse and repeat on the Riviera di Rimini as he attempt to claw back that gap. Consistent in the truest meaning of the word, the Japanese rider hasn’t put a foot – or wheel – wrong for a long, long time, and keeps racking up those podiums. A first win has evaded him as yet, but it can surely only be a matter of time – but he’ll have to balance scoring and beating Arenas with that last-lap instinct to win at any cost…

John McPhee (Petronas Sprinta Racing), in third overall, has a balancing act of his own too. There are plenty points left in play in 2020 despite the condensed season, but the Brit will be aiming for a return to the top and to iron out the kind of error that saw him hit the deck in the Styrian GP. He’s done in before though, and is both a proven veteran and winner, so he can’t be counted out.

The Italian contingent will be eager for some home glory in Misano though, and their ranks are led by the top two in the Styrian GP: first time Moto3™ winner Celestino Vietti (Sky Racing Team VR46) and runner up Tony Arbolino (Rivacold Snipers Team). Vietti has been a podium contender since his debut – quite literally – and a win felt like a matter of time, but it will be a solid shot of confidence for the impressive Italian. And so will the podium for Arbolino as he gains some traction in 2020…

Last year’s winner can probably be expected as a frontrunner too: Tatsuki Suzuki (SIC58 Squadra Corse). It was an emotional first win for rider and team at the aptly-named track last year, and that will boost his confidence after a couple of tougher races following his Andalucian GP win. But Raul Fernandez (Red Bull KTM Ajo), Gabriel Rodrigo (Kömmerling Gresini Moto3), Jaume Masia (Leopard Racing) and his teammate Dennis Foggia, another first time winner in 2020, will be aiming to fight it out with them in the upper echelons – along with the now-consistent frontrunner and race day threat Darryn Binder (CIP – Green Power). And what about the likes of Niccolo Antonelli (SIC58 Squadra Corse) and Romano Fenati (Sterilgarda Max Racing Team), veterans both and the latter a winner at the track? Can they pull out all the stops on home turf?

Red Bull KTM Tech 3’s pace could be one to watch too, as both Ayumu Sasaki and Deniz Öncü played big roles in the Moto3™ freight trains in Austria and Styria… before some awful luck in the latter saw Öncü collect his teammate and both crash out. Misano is two more chances to get up there in the battle.

Tune in for what’s pretty much guaranteed to be another awesome Moto3™ melee at Misano, with the lights going out on Sunday the 13th of September at 11:00 (GMT +2).