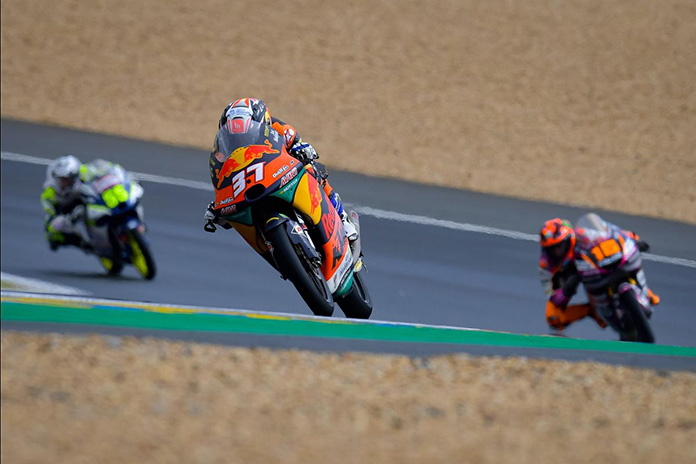 The Championship leader increased his lead significantly in France, and that despite a crash. But now, more new turf awaits at Mugello… in Moto3™ at least

The course of a Moto3™ race rarely did run smooth, but Le Mans was even more drama than normal. With Sergio Garcia (Valresa GASGAS Aspar Team) taking his first win of the year, second overall and first for GASGAS, it was a different face on the top step to the one we’d become accustomed to seeing in 2021. But Pedro Acosta (Red Bull KTM Ajo), despite taking a tumble in the difficult conditions, still got back on and took a good haul of points – and finished far ahead of those who’d previously been his closest challengers to boot. The result? An even bigger Championship lead.

For the veterans on his tail – Garcia, and Andrea Migno (Rivacold Snipers Team), Romano Fenati (Sterilgarda Max Racing Team) and Niccolo Antonelli (Avintia Esponsorama Moto3) – the good news is the experience they all have at Mugello, and for the most part, their CVs there too. The Italians will also be fired up on home turf as we return to the track for the first time since 2019. The slightly worse news is that, unlike Le Mans, Acosta does actually have a track record at Mugello: a second place in the Red Bull MotoGP Rookies race at the venue in 2019, the year he came runner up overall before going on to annihilate the competition last season. So it’s new turf on his Red Bull KTM Ajo machine… but it’s not a shot in the dark.

The Italians will be gunning hard though, as will Garcia after a good shot of confidence from his win in France. Filip Salač (Rivacold Snipers Team) too, and home hero Riccardo Rossi (BOE Owlride) after their first podiums. Both will be wanting more good points. Ayumu Sasaki (Red Bull KTM Tech3) remained on his consistent roll of top finishes too despite the different conditions in France, and John McPhee (Petronas Sprinta Racing) got some good points on the board just ahead of his former teammate. Adrian Fernandez (Sterilgarda Max Racing Team) and fellow rookie Xavier Artigas (Leopard Racing) also took their best finishes of the season so far, and confidence goes a long way.

Darryn Binder (Petronas Sprinta Racing), meanwhile, will be on an opposite mission: bouncing back. After the South African got skittled out at Jerez through no fault of his own, a crash in France put paid to solid points and he’s now down in eighth overall. Can he fight back before summer break and get back into the upper echelons of the Championship? He’ll be aiming to start that at Mugello.

The kilometre-long straight at the Autodromo Internazionale del Mugello always provides one of the greatest Moto3™ spectacles of the season. They’ll take it on again this Sunday, with the lights out at 11:00 (GMT +2) for another incredible lightweight class challenge.