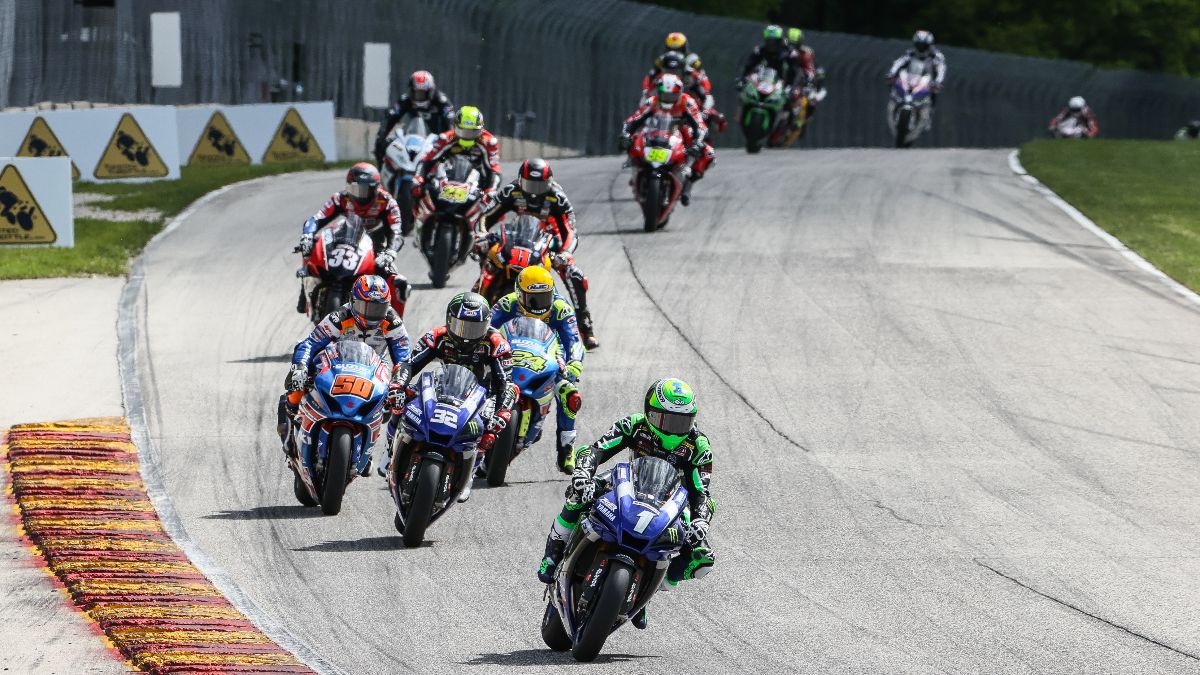 If you’re racing in the 2020 MotoAmerica Series, specifically in the HONOS Superbike class, one thing is certain: You’re hoping that there’s no such thing as déjà vu when the proceedings get rolling again at Road America this weekend for round two as MotoAmerica becomes the first motorcycle series in the U.S. to host fans post COVID-19 shutdown.

You don’t have to have a very long memory to recall how four-time MotoAmerica Superbike Champion Cameron Beaubier performed in the opening round of the series. The Monster Energy Attack Performance Yamaha rider demoralized the field with two runaway victories at a racetrack that normally features nail-biting finishes.

Beaubier led every session except for the warm-up on Sunday morning when mechanical issues held him to just one complete lap. He also broke the lap record with his 2:11.145 coming in the second session. Then the Californian simply owned the races, winning the two by margins of 7.8 and 14.3 seconds, respectively.

But that was then, and this is now, and we will find out in a few short days if the rest of the pack has found anything to gain time on Beaubier.

It’s Beaubier’s new teammate Jake Gagne who is closest to Beaubier in the championship after one round, the laid-back Californian finishing third and second in his debut on the second Monster Energy Attack Performance Yamaha YZF-R1.

Gagne had battles in both races with Westby Racing’s Mathew Scholtz and M4 ECSTAR Suzuki’s Bobby Fong, with Scholtz finishing second in race one with Gagne third and Fong fourth. In race two, the other two handed Gagne second place when the pair crashed out together in turn five after Fong clashed with Scholtz. Both men were quick up until that point with both dipping into the 2:11s. Ditto for Gagne.

That left an intense battle for the final podium spot between Scheibe Racing BMW’s Josh Herrin and KWR’s Kyle Wyman and his Ducati Panigale V4 R. Herrin came out on top, by just .011 of a second, and his sixth- and third-place finishes puts him third in the title chase, 24 points behind Beaubier and just two points ahead of Wyman who earned fifth- and fourth-place finishes in the opener.

Scholtz is tied for fifth with Celtic HSBK Racing’s PJ Jacobsen with FLY Racing ADR Motorsports’ David Anthony, Fong, RideHVMC’s Corey Alexander and Thrashed Bike Racing’s Max Flinders rounding out the top 10 in the series standings after one round.

The rider who struggled the most in the series opener is the same rider who most believe can make Beaubier’s life a bit more difficult. That man is Toni Elias. Elias’ opening weekend was atrocious. In race one, the Spaniard’s Suzuki GSX-R1000 lost its chain and in race two the former 2018 MotoAmerica Superbike Champion crashed. He comes to round two with zero points and a real need to get his feet back on the ground on the M4 ECSTAR Suzuki. If there’s a highlight to the weekend for Elias, it’s the fact that his best time over the course of the weekend this year was .675 of a second quicker than his best from a year ago.

With the debut of the Mini Cup by Motul class and Heritage Cup exhibition class, entries for round two of the 2020 MotoAmerica series have eclipsed the 180-rider mark.

Ticket sales are also on the rise with sales on pace to equal or surpass the 2019 numbers just one race after no spectators were allowed at round one, a race that had record numbers of viewers worldwide. “We’re extremely happy with how the opening round of the 2020 MotoAmerica Series went at Road America,” said MotoAmerica President Wayne Rainey. “We had huge television numbers with FOX Sports, Eurosport, MAVTV, NBC Sports, YouTube and MotoAmerica Live+. The event went off without a hitch, thanks to the efforts of our in-house staff, the staff at Road America, our volunteers, the riders and the teams. Now we get to go back to Road America and race in front of our fans, which will make this second race in Wisconsin even better. The COVID 19 pandemic has impacted everyone’s lives in some way and we’re happy to give our fans the opportunity to get out and see some racing at a world-class facility like Road America. We will be doing so, of course, using COVID guidelines.”

Beaubier’s two victories in the HONOS Superbike class at Road America in round one were the 39th and 40th career AMA Superbike wins for the four-time series champion. Beaubier is third on the all-time AMA Superbike win list behind Mat Mladin (82) and Josh Hayes (61).

Of the active riders in the HONOS Superbike class, Beaubier is on top of the all-time AMA Superbike race wins list with 40 victories. Toni Elias is tied for fourth on the list with Miguel Duhamel with 32 wins. The next highest number of wins by an active MotoAmerica rider is Josh Herrin with eight wins followed by Mathew Scholtz with two.

Road America 2 will mark the debut of the MotoAmerica Mini Cup by Motul class. The Ohvale-spec racing class will feature riders aged as young as seven competing on the go-kart track, which is located by the Carousel corner.

Cameron Beaubier broke his two-year-old lap record at Road America 1, the Monster Energy Attack Performance Yamaha rider putting in his quick lap in the second session – a 2:11.145. Beaubier’s previous best – a 2:11.422 – was set during Superpole in 2018.

Valentin Debise’s racing plans were thwarted by COVID-19 travel restrictions when he was denied a visa to leave his home country of France. Debise was slated to ride the second Scheibe Racing BMW in the HONOS Superbike races at Road America 2.

As far as manufacturers go, Yamaha has the most wins at Road America with 21 followed by Suzuki with 17, Honda (12), Ducati (eight) and Kawasaki (four). Yamaha had won seven of eight races until Suzuki swept both races in 2019 with Toni Elias and Josh Herrin. Beaubier started a new Yamaha streak with his two wins in Road America 1 at the end of May.

Riders from six different countries will line up at Road America in the HONOS Superbike class with the U.S., Spain, South Africa, Great Britain, Brazil and Australia all represented.

The official track length at Road America is 4.048 miles, which makes it the longest on the MotoAmerica schedule. The track features 14 turns and is affectionally known as “four miles of fun.”