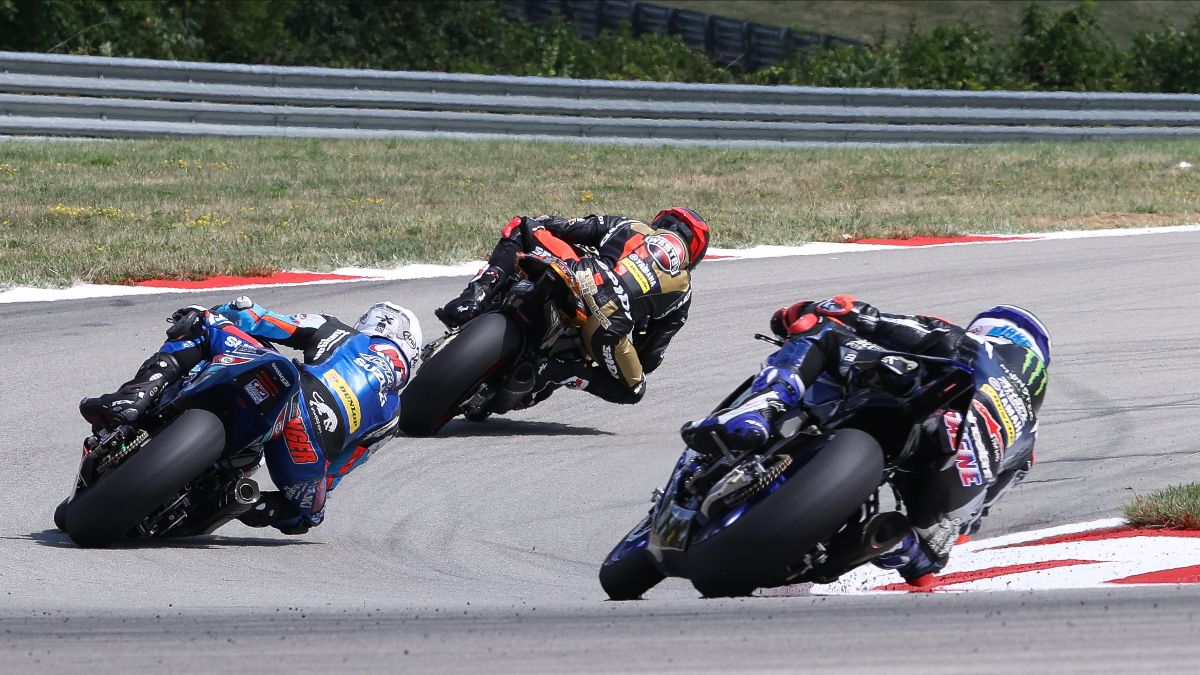 If you’re a racer, nothing gets you more fired up than visiting a racetrack for the first time and that’s what the majority of the HONOS Superbike field will be doing this coming weekend in the Komatsu Superbikes at the Ridge event, August 28-30, at the Ridge Motorsports Park in Shelton, Washington.

In fact, a lot of them won’t even wait until Friday to get the ball rolling as 13 riders from the HONOS Superbike class have signed up for the official MotoAmerica Dunlop test at the facility on Thursday – the day prior to the debut of MotoAmerica in the Pacific Northwest.

In total, 26 riders have entered the HONOS Superbike class at the Ridge, led by four-time MotoAmerica Superbike Champion and current championship points leader Cameron Beaubier. Of those 26, eight will be aboard Yamaha YZF-R1s, six will race Kawasaki ZX-10Rs, five will be BMW S 1000 RR mounted, four will be astride Suzuki GSX-R1000s, two will battle on Ducati Panigale V4 Rs and there will be a lone Honda CBR1000RR on the grid. Additionally, riders from seven countries, including the U.S., will do battle.

None come to the Pacific Northwest hotter than Beaubier, the 27-year-old Californian riding a four-race win streak and victories in seven of the eight races held thus far in the 2020 MotoAmerica Series. Only a crash in race two of Road America 2 has kept Beaubier from the perfect season as he’s won every race that he’s finished.

That all results in a 37-point lead for the four-time champ and his Monster Energy Attack Performance Yamaha YZF-R1. The strength of Beaubier’s new-for-2020 team is further confirmed by the fact that the man he leads in the title chase is his teammate, Jake Gagne. Gagne, in his debut season with the Yamaha team, has stood on the podium in seven of the eight races with four of those coming via second-place finishes.

Beaubier, Gagne and the M4 ECSTAR Suzuki team of Toni Elias and Bobby Fong have already tested at the Ridge in preparation for the MotoAmerica debut at the 16-turn, 2.47-mile racetrack with Beaubier setting the pace with a best lap of 1:41.1 on the second of two days at the track. Gagne ended the test as the second quickest of the testers.

Westby Racing’s Mathew Scholtz will certainly be on track on Thursday to play catchup to his four rivals who have already sampled the circuit. Scholz, fresh off two second-place finishes at the PittRace round a few weeks ago, is third in the title chase – 59 points behind Beaubier and 22 behind Gagne. The South African has a 27-point lead over KWR Ducati’s Kyle Wyman going into round five of the series.

From Wyman on down it gets tight with the New Yorker leading M4 ECSTAR Suzuki’s Bobby Fong by just seven points. Fong, the only rider other than Beaubier to win a race in 2020, had a rough outing at PittRace with a crash putting him out of Saturday’s race one and the resulting pain in his wrist/hand forcing him out of race two on Sunday. Thus, Fong failed to score a point in Pittsburgh.

Scheibe Racing BMW’s Josh Herrin is just five points behind Fong and only four in front of FLY Racing ADR’s David Anthony, the Australian in turn just five ahead of Fong’s teammate Toni Elias. Elias had the busiest time of the Superbike men between races with the birth of his baby girl, Giovanna Rosemei, coming just a week ago in Southern California.

The Komatsu Superbikes at the Ridge event will be the second MotoAmerica round this season to take place without fans in attendance. The other to do so was the season-opening round at Road America in Elkhart Lake, Wisconsin.

Former World Superbike rider and current Ducati Corse test rider Lorenzo Zanetti will make his MotoAmerica debut at the Ridge, the Italian filling in for the injured PJ Jacobsen on the Celtic HSBK Racing Ducati Panigale V4 R in the HONOS Superbike class.

Zanetti was penciled in to fill in for Jacobsen at the PittRace round but due to COVID-19 he wasn’t able to travel in time to get to Pittsburgh. Jake Lewis rode the bike instead in round four.

Those with a long memory will recall when the Fast By Ferraci team brought an Italian over mid-season to ride a Ducati in the AMA Superbike Series… that Italian, Alessandro Gramigni, ended up winning two races for the Eraldo Ferracci-owned and run team in 1996.

Toni Elias, the 2010 Moto2 World Champion and 2017 MotoAmerica Superbike Champion, is on the worst run of his MotoAmerica Superbike career heading into PittRace. Prior to the current season, Elias had never gone more than three races without finishing on the podium. In 2016, the Spaniard’s first in the series, Elias failed to podium in three straight races (race one at Road Atlanta and races one and two at New Jersey Motorsports Park); in 2018 he matched that with three in a row (Road America race one and two and Laguna Seca race one). Dating back to the final race of last year when he finished fourth at Barber Motorsports Park, Elias has now finished off the podium in nine straight races.

Cameron Beaubier competed in his 100th AMA Superbike race in race two at PittRace and he celebrated in style with a victory – his 45th career win in the class. Beaubier made his AMA Superbike debut at Daytona in 2014 and he’s been winning almost ever since. Beaubier has missed just three races in his Superbike career with a shoulder injury in 2017 sidelining him for three races. He is third on the all-time Superbike win list behind Aussie Mat Mladin (82 wins) and his former teammate Josh Hayes (61 wins).

Eight. That’s the magic number for Cameron Beaubier as far as wins in a season. Beaubier has won eight races in three of his four championship-winning years and one more victory in 2020 will put him at eight wins already for the current season.

The most wins in a MotoAmerica Superbike season is 10, a mark Josh Hayes set in the first year of the MotoAmerica era in 2015 and a mark Toni Elias set en route to his title in 2017.

With no previous MotoAmerica races to go by, Beaubier’s best lap from the two-day test at the Ridge, July 14-15, is the mark to shoot for in Thursday’s test and the three-day race weekend that will follow it. Beaubier’s best from the test was a 1:41.1.