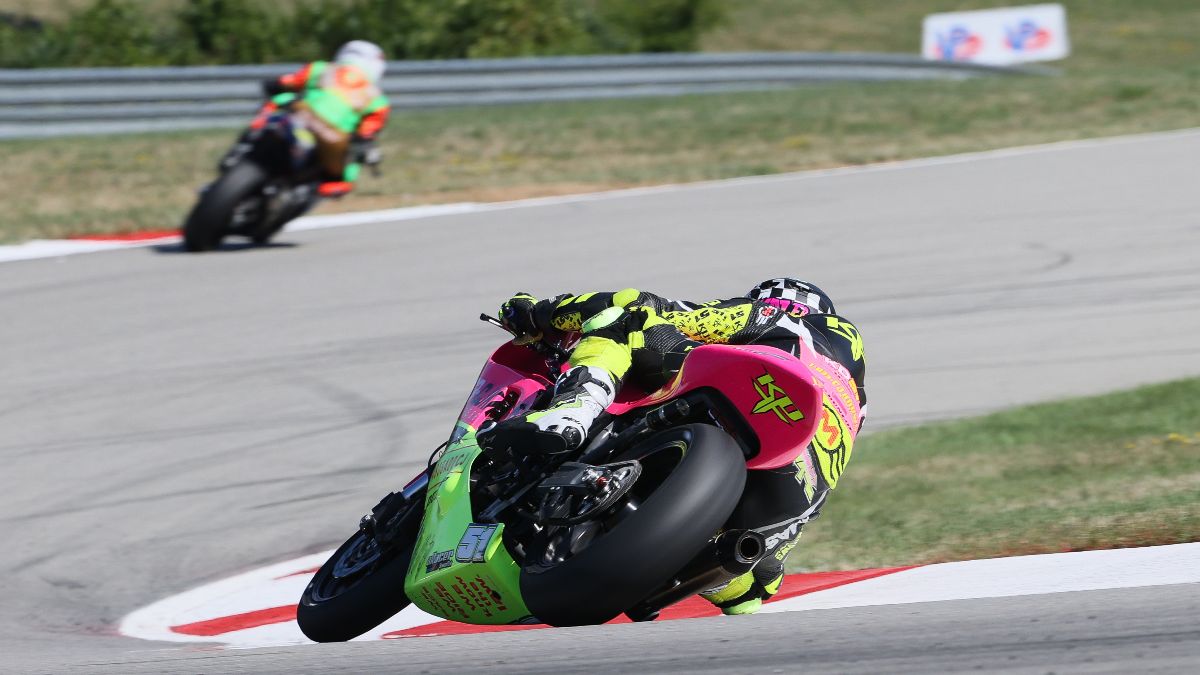 Will an extra two days of testing help Sean Dylan Kelly catch up to Richie Escalante? Dominic Doyle has been working on his starts. Will that keep him in contact with Rocco Landers? Can Landers keep Kaleb De Keyrel behind him? Will Cameron Petersen and Corey Alexander continue to exchange blows?

All those questions will likely get answered this weekend when MotoAmerica returns to action with the Komatsu Superbikes at the Ridge event at the Ridge Motorsports Park in Shelton, Washington.

Escalante and his HONOS-backed Kawasaki arrive in the Pacific Northwest as the hottest duo in the MotoAmerica paddock. Escalante has seven wins in eight races, and he was second in the only race he didn’t win. That has put M4 ECSTAR Suzuki’s Sean Dylan Kelly on his back foot and taking punches to the stomach. He’s now 50 points behind – and that’s with a win and six second-place finishes. In a normal season, those results don’t put you 50 points behind. But this is no normal season when it comes to Escalante’s pure speed and consistency. To put it mildly, he is on a roll that is proving difficult to stop. But Kelly won’t give up and he at least comes to the Ridge with two days of testing under his belt while Escalante will lay eyes on the place for the first time in Thursday’s test day.

Celtic HSBK Racing’s Brandon Paasch is the other consistent podium finisher in the bunch with Escalante, Kelly and Paasch making up the podium in six of the eight races. Paasch is 29 points behind Kelly and 79 behind Escalante.

Doyle and his BARTON Kawasaki Ninja 400 started the season with three straight wins in the Liqui Moly Junior Cup class, but Norton Motorsports/Ninja400R/Dr. Farr/Wonder CBD’s Rocco Landers has reversed all that with five wins in a row. Doyle knows his starts have been hurting his results and he’s worked on those in the few weeks off between races. Now we will see if it makes a difference for the South African to try and thwart Landers, who is fresh off two weekends of intense racing in the Red Bull Rookies Cup in Austria.

Celtic HSBK Racing’s Samuel Lochoff has proven to be the best of the rest with six podiums and third in the title chase heading to the Ridge. He’s 25 points behind Doyle and 59 in arrears of Landers.

To Kaleb De Keyrel, Landers is just another guy to beat and he’s proven capable of that with wins in three of the five Twins Cup races thus far in 2020. SportbikeTrackGear.com Roadracingworld.com Suzuki’s Landers has won the other two races, and only trails De Keyrel and his 1-833-CJKNOWS Accident & Injury Law-backed Yamaha FZ-07/MT-07 by 13 points.

Hayden Schultz is third in the championship with podiums in the last three races, but he won’t be making the trip to the Ridge and will likely surrender that spot to Jason Madama, the Coloradan just eight points behind Schultz.

Right now, the Stock 1000 title chase is being fought out between Cameron Petersen and his Altus Motorsports-backed Suzuki GSX-R1000 and the Ride HVMC Racing Kawasaki ZX-10R of Corey Alexander with those two separated by just three measly points. What may worry both of them, however, is the trajectory of young Alex Dumas’ learning curve in his first season on the M4 ECSTAR Suzuki GSX-R1000.

Dumas started his debut season in the class with a seventh-place finish. From there he jumped to fourth, then third, then two seconds and another fourth. The seconds came at two different tracks – Michelin Raceway Road Atlanta and Pittsburgh International Race Complex – and he was oh-so close to his first win at PittRace where he was narrowly beaten by doubleheader winner Petersen. Dumas’ first win isn’t far away and the other two know it.

Dumas is third in the title chase, 24 points behind Petersen and 21 behind Alexander. Behind those three, Stefano Mesa, Travis Wyman and Michael Gilbert are fighting over fourth in the championship – the trio separated by just 19 points.

The Mini Cup by Motul round will also take place at the Ridge, with some 22 entries spread over three classes in the series’ debut season. The Ridge round is the finale in the debut, three-round 2020 Mini Cup by Motul Championship season.