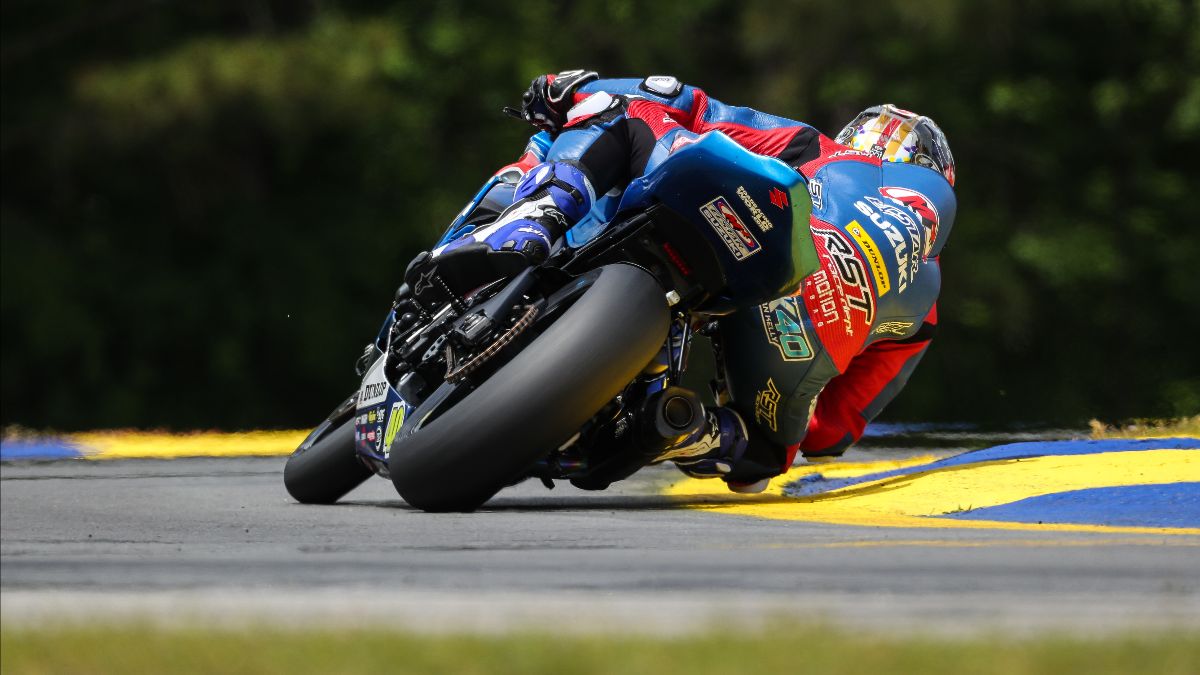 Only One Rider Emerged From The Opening Round In Georgia Without A Loss: Sean Dylan Kelly

Only one rider arrives at VIRginia International Raceway this week with a blemish-free 2021 race record. That man is M4 ECSTAR Suzuki’s Sean Dylan Kelly, the newly turned 19-year-old the only rider to come away from the opening round at Michelin Raceway Road Atlanta undefeated.

Kelly won both of the MotoAmerica Supersport races in the series opener in Georgia, the Floridian topping his class rival and last year’s champion Richie Escalante in both to get a leg up in what will certainly be a battle to the end between those two. For now, Kelly has a 10-point lead and also a boost in the confidence department heading into VIR.

With those two expected to battle for the title all year, nobody can predict what’s in store for those behind them. For round one, though, it was Kelly’s teammate Sam Lochoff and North East Cycle Outlet Racing’s Benjamin Smith who came out the best, with those two tied with 20 points. Smith earned his by virtue of two sixth-place finishes, including being in a fight for the final podium spot all the way to the last corner in race two. For Lochoff, it was a fifth and a seventh that earned him his points.

Cycle Gear Racing’s Nolan Lamkin and non-defending Twins Cup and SportbikeTrackGear.com Junior Cup Champion Rocco Landers both earned career-first podiums in the class with Landers’ coming in third in just his second MotoAmerica Supersport race. Those two also had DNFs in the races they didn’t finish third in and they sit in a tie for fifth with 16 points apiece.

Things are tight at the top in Stock 1000 as the series lands in Virginia. Travis Wyman Racing’s Travis Wyman is at the top of the heap with 41 points after his third-place finish and victory at Road Atlanta. Wyman is trailed by Jones Honda’s Ashton Yates, who is five points in arrears, and race-one winner from Road Atlanta, Michael Gilbert. Gilbert is six points behind after the first two races of the season.

Geoff May Racing/VisionWheel.com’s Geoff May and Altus Motorsports’ Jake Lewis round out the top five as we head to round two. One rider who will be looking to rebound from a horrible start to his year is one of the preseason favorites for the title, Corey Alexander. The HONOS-backed Kawasaki rider was sixth and 13th in the two races after a myriad of problems over the course of the weekend.

With the top three riders in the SportbikeTrackGear.com Junior Cup class from 2020 all moving up in class, it was expected that 2021 would bring a laundry list of first-time winners. Michelin Raceway Road Atlanta gave us the start to that with Scott Powersports KTM’s Tyler Scott taking his first career win (in his MotoAmerica debut) in race one and Landers Racing’s Ben Gloddy (who had eight podium finishes in 2020, but no wins) doing likewise in race two. Those two split the wins and when they didn’t win, they both finished second. Thus, they are tied atop the standings with 45 points apiece.

Next best is the pairing of KERmoto’s Cody Wyman and Veloce Racing’s David Kohlstaedt with those two splitting third and fifth-place finishes in the opener and finishing the weekend tied for third in the title chase.

Pure Attitude Racing’s Trevor Standish didn’t win a Twins Cup race in the series opener in Georgia, but he emerged with the points lead based on consistent fourth- and third-place finishes, with his ride in race two earning him his first podium finish in the class. Chris Parrish, who also didn’t win a race, is second in points heading to VIR – seven behind Standish and one point clear of race two winner Teagg Hobbs.

Race-one winner Kaleb De Keyrel is fourth in points as his weekend in Georgia featured the highest of highs and the lowest of lows. On Saturday, De Keyrel gave Aprilia its first MotoAmerica Twins Cup victory; a day later he crashed out of the lead battle when his RS 660 had a mechanical problem and took almost every Aprilia in the race with him.

It’s worth noting that parity has most definitely arrived in the Stock 1000 class with the first of the two Stock 1000 races at Road Atlanta featuring three different manufacturers on the podium: Kawasaki (Gilbert), Yates (Honda) and Wyman (BMW).

On Saturday at Road Atlanta, Aprilia’s new RS 660 filled the podium in its debut in the class. The following day, it was Suzuki SV650s holding down the top three finishes.

Sean Dylan Kelly’s two wins at Road Atlanta were the eighth and ninth Supersport wins of his career. He has now won the same number of races as Hayden Gillim and is four behind his rival Richie Escalante in Supersport career victories.

With MotoAmerica not racing at VIR in 2020 because of COVID-19, it’s a look back to 2019 to see who did what at the popular racetrack. In the first of two Supersport races, it was PJ Jacobsen taking victory. In race two it was Hayden Gillim taking the win. In Junior Cup action, Rocco Landers won race one with Cameron Jones taking the first win of his career in wet conditions on Sunday. The lone Twins Cup race was won by Chris Parrish with Michael Gilbert scoring the win in Stock 1000.