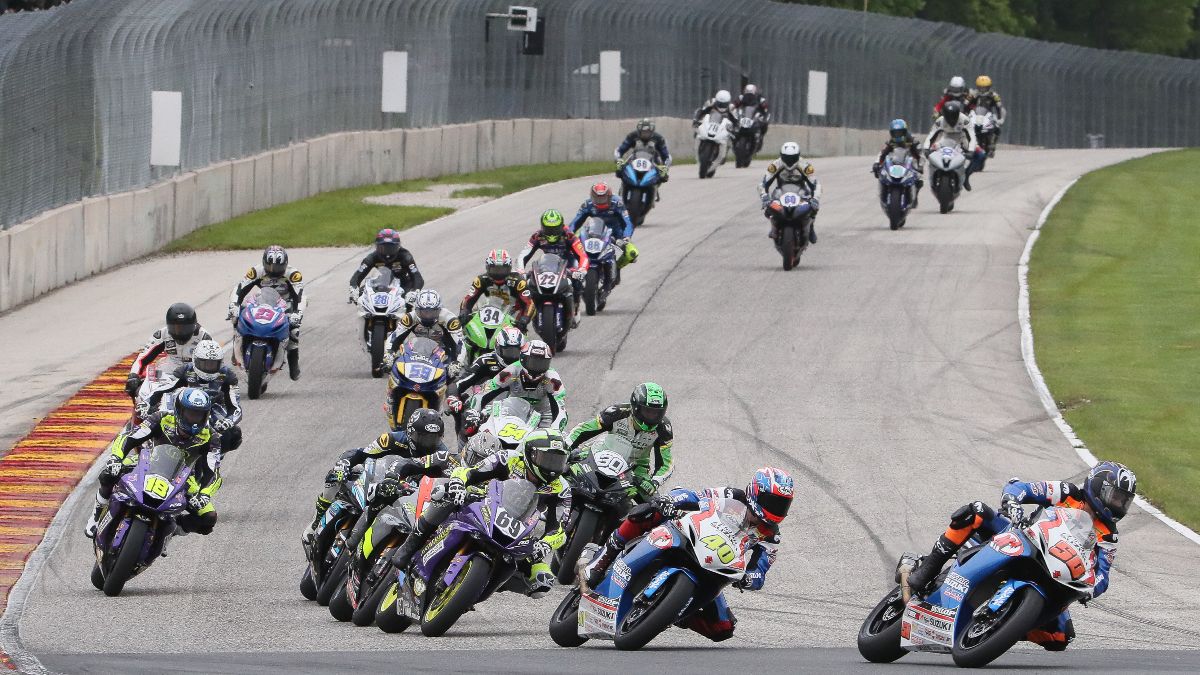 Depending on how many MotoAmerica races Rocco Landers can jam into his busy racing schedule, there’s a good chance that all four of the support classes in the 2020 MotoAmerica Series will have new champions at the end of the season.

Landers, the defending Liqui Moly Junior Cup Champion, will be pulling double duty this coming weekend in the series opener at Road America, May 29-31, riding a Landers Racing Kawasaki Ninja 400 in Junior Cup and a Roadracing World Young Guns/American Racing Suzuki SV650 in the Twins Cup. If he can score enough points in the Liqui Moly Junior Cup Series this season while perhaps racing a limited schedule, then he could possibly defend that title. If not, then there will be no repeat champions in 2020 in the support classes.

MotoAmerica Supersport Champion Bobby Fong has moved on to the HONOS Superbike class, riding a GSX-R1000 for the team on which he won the Supersport title last year – M4 ECSTAR Suzuki. Twins Cup Champion Alex Dumas will again be Fong’s teammate in the M4 ECSTAR Suzuki squad, but he won’t be defending his Twins title as he moves to the Stock 1000 class. And, as of now, two-time Stock 1000 Champion Andrew Lee isn’t going racing in 2020.

With Fong and Supersport Championship runner-up PJ Jacobsen also moving to the HONOS Superbike Series, the Supersport title chase is set to be a wide-open affair. As it looks on paper, the title chase could very well be fought out between the fourth- and fifth-ranked riders from last year – M4 ECSTAR Suzuki’s Sean Dylan Kelly and HONOS Racing’s Richie Escalante.

There are, however, several others who could challenge – namely Aguilar Racing’s Jason Aguilar and Celtic HSBK Racing’s Brandon Paasch, another rider whose international racing schedule is in flux. Altus Motorsports’ Kevin Olmedo, who finished second in the Liqui Moly Junior Cup last year, is also a young rider to watch as he moves up a class to Supersport. Another who has shown speed of late is Kelly’s M4 ECSTAR Suzuki teammate Lucas Silva.

It will be interesting to see who steps up to take a Supersport title that seems to be anyone’s for the taking.

As mentioned earlier, the Liqui Moly Junior Cup title chase will depend a lot on what Landers does or doesn’t do. After winning 14 races last year en route to the title, it’s obvious who the title favorite is if his schedule doesn’t end up conflicting: Rocco Landers.

But let’s not sell the others short because you just never know who is going to burst onto the scene, especially when there are 14- and 15-year-olds involved. Put it this way: Did 14-year-old Landers surprise us last year?

The top returning rider in the championship from a year ago (other than Landers) is BARTCON Racing’s Dominic Doyle, the fifth-ranked rider in the class in 2019. Others expected to compete at the front are Westby Racing’s Cody Wyman, Celtic HSBK Racing’s Samuel Lochoff, Quarterley Racing/On Track Development’s Benjamin Gloddy, Burleson Racing’s Isaiah Burleson and several others. The opening round at Road America will also mark the series debut of Alexis Olivera, the young Floridian girl racer who will ride a TrackWorx Motorsports Roaring Toyz Kawasaki Ninja 400.

Many of the top Stock 1000 riders are also pulling double duty and racing in the HONOS Superbike class in addition to Stock 1000. That could mean competing in as many as four races over the course of weekend, though not on the opening weekend as there will only be one Stock 1000 race to go with the two Superbike races.

The Twins Cup class will race twice in the season opener and again they will do so without their champion from last year, Alex Dumas. While Dumas may have moved on, there are 29 others ready to fight it out at Road America with plenty of youngsters moving up to the Twins Cup fulltime from the Liqui Moly Junior Cup class.

The class is robust, it’s competitive and it all gets started with two Twins Cup races to open the season at Road America.

Geoff May and Stefano Mesa split wins in last year’s two Stock 1000 races at Road America, which was round four a season ago.

In last year’s Liqui Moly Junior Cup races, it was all Rocco Landers, the 14-year-old winning both races by the slimmest of margins over Dallas Daniels in race one and Kevin Olmedo in race two. The winning margin in both was a combined .187 of a second.

Hayden Gillim and Bobby Fong split wins in the two Supersport races at Road America a year ago and the lone Twins Cup race win went to Draik Beauchamp, in what was his first career MotoAmerica victory.