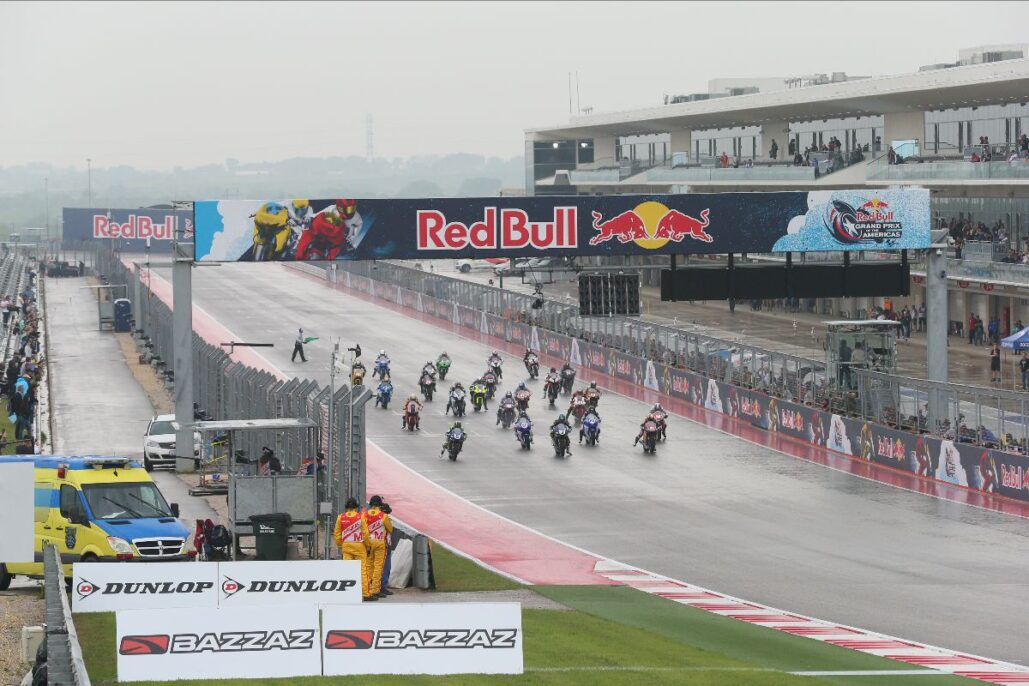 When The Checkered Flag Falls On Sunday at Brainerd International Raceway, The 150th MotoAmerica Superbike Race Will Be In The Books.

The winner that day? Fittingly, it was four-time AMA Superbike Champion Josh Hayes who ushered in the new series with a victory over his Yamaha teammate Cameron Beaubier, the man who would carry the MotoAmerica torch as its champion for five out of the next six years. Back then Superstock 1000 bikes ran with the Superbikes with separate results. Thus, it was also fitting that the first Superstock 1000 race gave us a glimpse into the future as it was won by Jake Gagne, the current MotoAmerica Medallia Superbike Champion.

There were just 11 Superbike entries on the grid at COTA in 2015, 15 less than the 26 who were led home to the finish at COTA this year by race winner Danilo Petrucci.

That first season of MotoAmerica racing also featured several wet races, including the “rainey” one that opened the era in Texas with Hayes topping his Monster Energy Graves Yamaha teammate Beaubier by 5.2 seconds and Yoshimura Suzuki’s Roger Hayden rounding out the podium.

The following day, Beaubier won his first career MotoAmerica Superbike race in a thriller over Hayes by less than half a second.

“I have a lot of friends here in Texas and I’m a bit overwhelmed,” Hayes said after winning what was his 49th career Superbike victory on day one. “We’ve had some dodgy weather, we’ve had some good weather, we’ve had a little bit of everything. I feel like we’ve had a good sprinkle of everything. To have a successful race weekend and come out of here with a win, regardless of what happens tomorrow, it’s fantastic. I’m very happy to be up here and get one in for Yamaha and the new R1. My team has done an amazing job. I was prepared, rain or shine. Mentally, I was in a really good state. I was ready to go either way very early in the weekend.”

In race two, Beaubier (who qualified on pole position) won his first career MotoAmerica Superbike race in a thriller over Hayes by less than half a second.

“I saw him coming into the last corner and I was like, ‘No, this is my frickin’ race,’ “ Beaubier said. “It was pretty cool to get it done today. I looked back to make sure he was up and then looked at my leg and there was some rubber there. But it’s a lot of fun racing these guys. I feel like we have respect for each other, but at the same time we can lean on each other pretty hard. I’m looking forward to this year.”

“It’s a dream come true for me to win the championship in my second year on a Superbike and my first year with this brand-new R1. Josh (Hayes) is an awesome teammate and a great Champion. He’s helped me so much.”

Beaubier would successfully defend his MotoAmerica Superbike Championship in 2016, but there was a new challenger in the series – a diminutive Spaniard by the name of Toni Elias – who would push Beaubier and the rest to a new level.

Beaubier again won eight of the 18 races in 2016, but Elias and his Yoshimura Suzuki won six – including his two debut races at COTA. Hayes would win a pair of races and Hayden would also win two.

The 2017 season was expanded to 10 rounds and 20 races for the first time, and it would again feature Beaubier/Elias battles with Elias taking the crown with 10 race wins to Beaubier’s five, though Beaubier’s season ended four rounds early after the Yamaha man suffered a shoulder injury at Pitt Race that required surgery. Hayden, meanwhile, won three more races in 2017, the last three wins of his career, and he ended up second to his teammate in the final point standings.

The 2018 season was again a Beaubier vs. Elias battle that went the way of Beaubier, even though Elias won more races (nine to eight). Beaubier’s season was more consistent, and he was crowned MotoAmerica Superbike Champion for the third time.

Other winners on the year were Attack Performance Yamaha’s Josh Herrin (two wins) and Westby Racing’s Scholtz (one win at COTA, again in the rain).

The 2018 season was also the first without Hayes on a Superbike, the four-time champ replaced on the Monster Energy/Yamalube/Yamaha Factory Racing team by two-time MotoAmerica Supersport Champion Garrett Gerloff.

Elias again won the most races in 2019 (seven to Beaubier’s six) and again he was beaten to the championship by Beaubier, who won the last three races while Elias faltered to take the title by just five points. Beaubier’s two victories in the season finale in Alabama were the 37th and 38th of his career, and the result of those wins was his fourth AMA Superbike title.

The 2019 season was also a breakout year for Gerloff with the Texan winning four races and turning heads in the process. At the end of the year, Gerloff signed a deal that would see him move to the World Superbike Championship for the 2020 season.

Beaubier’s final season of MotoAmerica racing in 2020 put an exclamation mark on his stateside racing career as he won a record-setting 16 races while earning his fifth MotoAmerica Superbike title. He also ended the year with 54 career Superbike wins, a mark that puts him third on the all-time AMA Superbike win list. With a fifth title in his pocket, it was time to move on and Beaubier jumped to the Moto2 World Championship in 2021.

As it turns out, Beaubier’s record-setting 16-win season in 2020 didn’t last long as his teammate Jake Gagne took over the lead role in the Fresh N Lean Attack Performance Yamaha team and did so with a season to remember. Gagne ended up winning a record 17 races on the year.

The other race winners in 2021 were Scholtz with two victories and Cameron Petersen with one.

With 12 races complete in 2022 heading into the 149th and 150th MotoAmerica races, Gagne has seven wins and leads the championship by just three points over Warhorse HSBK Racing Ducati NYC’s Danilo Petrucci and his three victories.

Petersen and Scholtz are the other two riders with wins in 2022.

With MotoAmerica celebrating its 150th Superbike race this weekend, the staff of MotoAmerica, its racers, teams and sponsors all remember the two men who lost their lives on July 19, 2015, in an accident on the opening lap of the second Superbike race at WeatherTech Raceway Laguna Seca – Spaniards Bernat Martinez and Daniel Rivas. They are not forgotten. 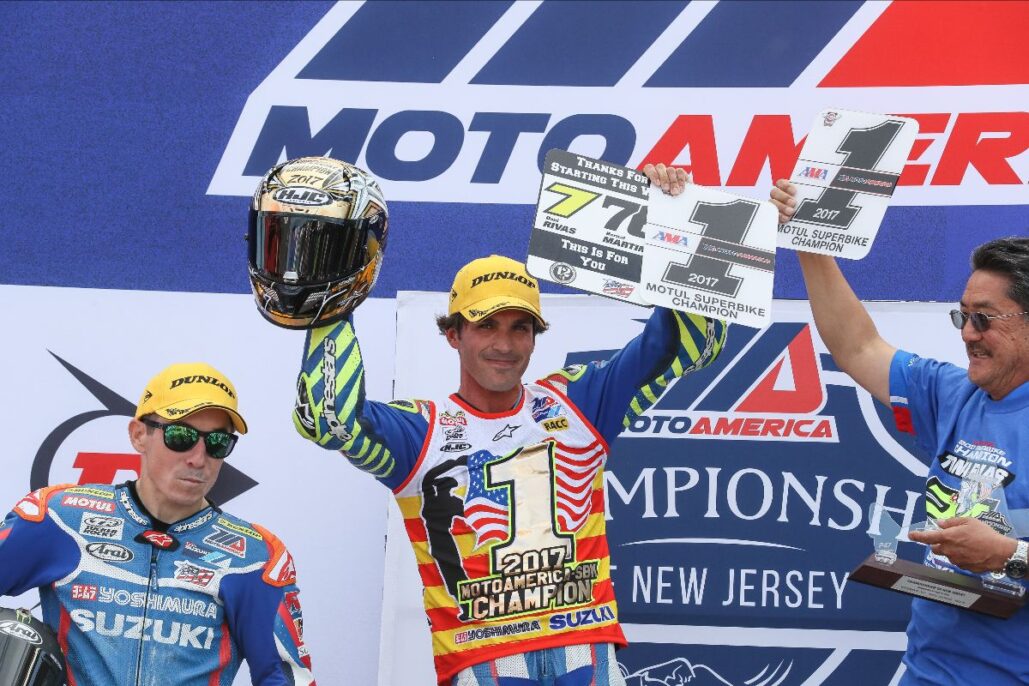