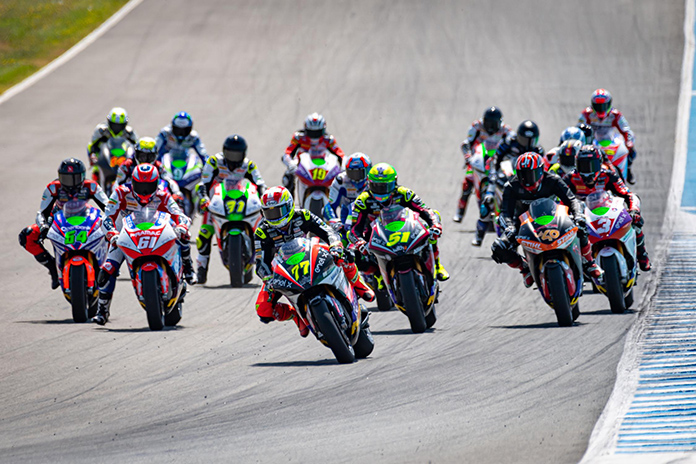 The FIM Enel MotoE™ World Cup gets ready to race at the Circuit de Barcelona-Catalunya for the first time, with Zaccone still in the driving seat.

Last time out we were treated to a true spectacular in the FIM Enel MotoE™ World Cup, with Eric Granado (ONE Energy Racing) and Alessandro Zaccone (Octo Pramac MotoE) duelling to the line. Granado came out on top to take only his second MotoE™ win despite his record of speed, and now we’re back in business in Barcelona… but with Zaccone still very much in the points lead.

The Circuit de Barcelona-Catalunya is a new challenge for the Cup, so there are no MotoE™ track records to go on. But looking at the season so far, Zaccone, Granado and Dominique Aegerter (Dynavolt Intact GP) have arguably been the biggest players overall: Zaccone has turned a more surprise win into sustained speed and aggression, Granado found redemption in serious style, and Aegerter has pace and consistency nailed down.

If MotoE™ has taught us anything so far, however, it’s that predicting race day is a hard task in both theory and practice. Mattia Casadei (Ongetta SIC58 Squadra Corse) is proof of that as the Italian now sits second in the standings following his first podium of the season at Le Mans, and that’s after missing the first preseason test and not seeming to have found his previous MotoE™ form in Jerez at all. Can the roll continue? He’s a veteran with a good CV in the electric class too. That’s also true of reigning Cup winner Jordi Torres (Pons Racing 40), the only other rider who’s been on the podium already this season, although it’s been a pretty smooth start to his 2021 already. Consistency, speed and solid decision-making have been his hallmarks, and it’s Torres’ home turf we arrive onto. Can he get back on the box?

There are those still looking for that first podium of the year, or in the Cup, who could be threats at the front too. 2019 Cup winner Matteo Ferrari (Indonesian E-Racing Gresini MotoE) is the former as he looks to settle in better to the changes for 2021, although he’s been consistent as ever in sixth overall. And some of the latter? Lukas Tulovic (Tech3 E-Racing) is one. The German has been quick and bounced back from bad luck in Jerez to get right in the freight train battle at the front in France, so surely for the German it’s a matter of when, not if. Miquel Pons (LCR E-Team) too, with the rookie taking a top five already.

And then there’s Fermin Aldeguer (Openbank Aspar Team). One of the stories of preseason with his incredible speed from the off, the 16-year-old raised some eyebrows early. From STK600 glory in the FIM CEV Repsol to near the top of testing in MotoE™ is how it started in 2021, but how it’s going is even more impressive. Undefeated in the Moto2™ European Championship with three wins from three, that earned him a ride as injury replacement at MB Conveyors Speed Up in the Moto2™ World Championship at Mugello, and the weekend could not have been a realer deal. In his first event on both the bike and track, he scored four points and was 0.050 off the next rider on the same chassis. So can he bring that touch of magic to MotoE™? He has a single point so far as pace has been undermined by mistakes, but if it all comes together…

MotoE™ go racing at 16:00 (GMT +2) on Sunday at the Circuit de Barcelona-Catalunya, so make sure to tune in for another battle royale and see who comes out on top in Round 3.