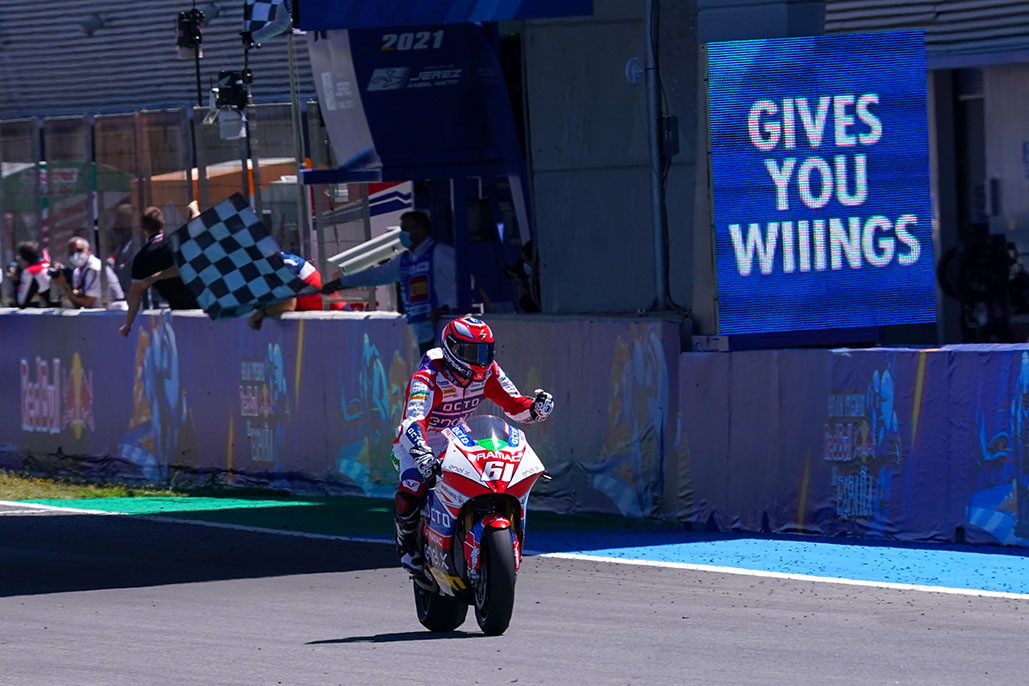 The FIM Enel MotoE™ World Cup sparks back into life at Le Mans, with Zaccone arriving ahead.

After a Round 1 with plenty of thrills and a couple of spills in the FIM Enel MotoE™ World Cup, it’s already time for the grid to head back out for another showdown, this time at Le Mans. Arriving ahead after his first electric victory is Alessandro Zaccone (Octo Pramac MotoE), who turned consistent speed into an impressive Sunday charge, and the stage is set for Round 2 at the SHARK Grand Prix de France.

Zaccone will definitely be on everyone’s radar after his impressive weekend at Jerez, but Le Mans could be a tougher one. Looking ahead to the round in the post-race Press Conference, the Italian explained that the Cup’s 2020 visit had been challenging with the mixed conditions really hampering those who, like him, had never ridden Le Mans before. With only six or seven laps in the bag before E-Pole and then the race, it was a tall order. So he’ll be pushing to keep that consistency, but who else will come out swinging?

2020 contender Dominique Aegerter (Dynavolt Intact GP), second in Jerez, will surely be at the front once again, and the Swiss rider has plenty of experience at the venue despite some bad luck last year in Race 1 and a fourth in Race 2. Jordi Torres (Pons Racing 40), meanwhile, won the first MotoE™ race in France before a solid sixth on in Race 2 to take home the Cup. After starting the season on the podium he’ll be eager for more at what’s so far been a happy hunting ground in MotoE™. Incredibly, he’s also the only rider on the grid returning this year who already has a podium at Le Mans in the series.

On the other side of the coin, Eric Granado (One Energy Racing) will be looking to bounce back. Once again the fastest man on track and putting on an impressive show in E-Pole, disaster struck for the Brazilian on race day as he slid out the lead. His speed was very much on show, however, so can Le Mans see him iron out the cracks? Last year it wasn’t his best venue, but consistent speed rather than lap records is what he’ll be looking for… so could his less dominant speed at Le Mans so far work to his advantage?

Just off the podium fight, Mattia Casadei (Ongetta SIC58 Squadra Corse) made a step in Jerez but will still be looking for more, as will 2019 Cup winner Matteo Ferrari (Indonesian E-Racing Gresini MotoE), although the latter moved through from the back of the grid after exceeding track limits in E-Pole and took home sixth. That’s a good step as both work on getting more from the updated tyres for this season, and experience did shine on race day.

That said, the man who just pipped Ferrari to fifth was rookie Miquel Pons (LCR E-Team). Pons, after some impressive performances in preseason, had a more muted first weekend until Sunday when he moved up to complete the top five and depose fellow debutant Fermin Aldeguer (Openbank Aspar Team) as top rookie. Can Aldeguer, who took a front row start before he and Lukas Tulovic (Tech 3 E-Racing) crashed out together in Jerez, hit back at Le Mans?

Hikari Okubo (Avant Ajo MotoE) put in a solid rookie race too in seventh and he’ll want more, ahead of a step forward from Andrea Mantovani (Indonesian E-Racing Gresini MotoE) at Round 1. Maria Herrera (Openbank Aspar Team) also made some progress, despite afterwards heading in for arm pump surgery. She beat Yonny Hernandez (Octo Pramac MotoE) by a tenth first time out, but Hernandez has some serious experience at the track, having been on the podium in the 24 hour race in 2019. That worked well for last year’s MotoE™ podium finishers Mike di Meglio and Josh Hook…

After a hard-racing start at Jerez, the FIM Enel MotoE™ World Cup is already recharged for more. E-Pole at Le Mans takes place at 16:05 (GMT +2) on Saturday, before the race on Sunday at 10:05.