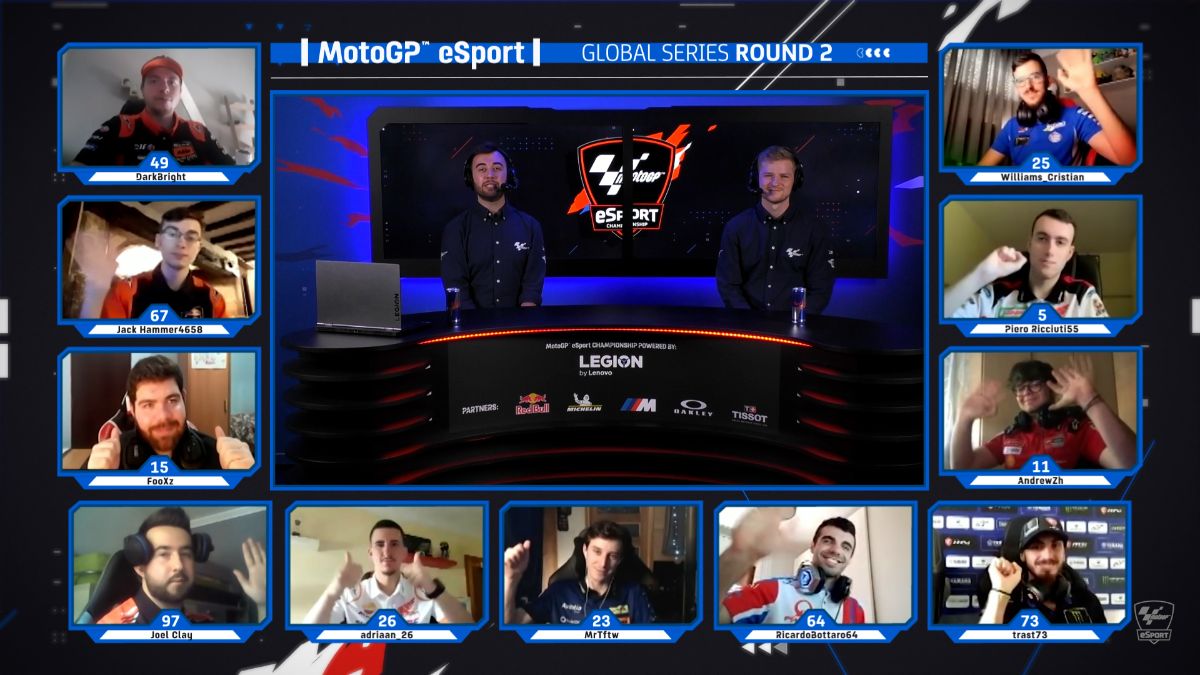 MotoGP™ eSport Championship wide open after stunning second round of the Global Series!

There were surprises aplenty in the second round of the 2021 MotoGP™ eSport Global Series, with some established names experiencing issues and a four-way title fight developing!

The MotoGP™ eSport Global Series was blown wide open after a stunning second round saw a host of drama and surprise, leaving four names covered by just nine points in the championship standings!

In June, eleven gamers from around the world were chosen to represent one of the eleven current MotoGP™ teams for the four-round Global Series, an eight-race event that will determine the winner of the 2021 MotoGP™ eSport Championship.

And two of the names that had enjoyed great success at round one – Trast73, the 2017 and 2018 MotoGP™ eSport Champion and Adriaan_26, the reigning champ – suffered different degrees of hardship and misfortune, allowing new star PieroRicciuti55_ and 2019 champ AndrewZh back in the hunt.

MotoGP™´s Jack Appleyard and Jack Gorst combined their presentation duties with exciting commentary. The current COVID-19 pandemic restricted the eleven finalists to their homes, where they competed against one another while communicating via a communal video call.

But the action was still as intense as ever. The first race was held in wet conditions around the historic Sachsenring Circuit, with the second outing coming from the high-speed Red Bull Ring in the Austrian mountains.

The wet conditions in Race 1 threw the proverbial cat among the pigeons, with reigning champion Adriaan_26 qualifying down in eighth place. In a brilliant race that went right the way to the final corner of the final lap, AndrewZh won out in the rain, taking his first victory of this year’s Global Series with new stars RiccardoBottaro64 second and Jack Hammer4658 third. The podium was covered by just 0.9s!

The championship really heated up here, with Adriaan_26 fighting back to finish fifth, one place ahead of rival Trast73, who was unable to make good on his pole position. Both men finished behind new star, LCR Honda’s PieroRicciuti55_, who was fourth.

In Race 2, PieroRicciuti55_ grabbed the initiative from the start and entered into a race-long duel with the highly experienced Williams_Cristian. The Suzuki Ecstar rider put the pressure on all race, but Piero Ricciuti55_ held on brilliantly for a first win of this year’s Global Series.

Trast73 recovered well from a tough outing at the Sachsenring to come home a solid third in Monster Energy Yamaha colours with RiccardoBottaro64 showing his talent once more with an excellent fourth. Adriaan_26 recovered to fifth, with AndrewZh slightly disappointed with sixth.

Still, it leaves the championship incredibly close, especially when double points are on offer for the final round! The results leave Trast73 at the head of the table, four points clear of Adriaan_26. But there’s almost nothing in it, with PieroRicciuti55_ also four points behind and AndrewZH only nine off the top!