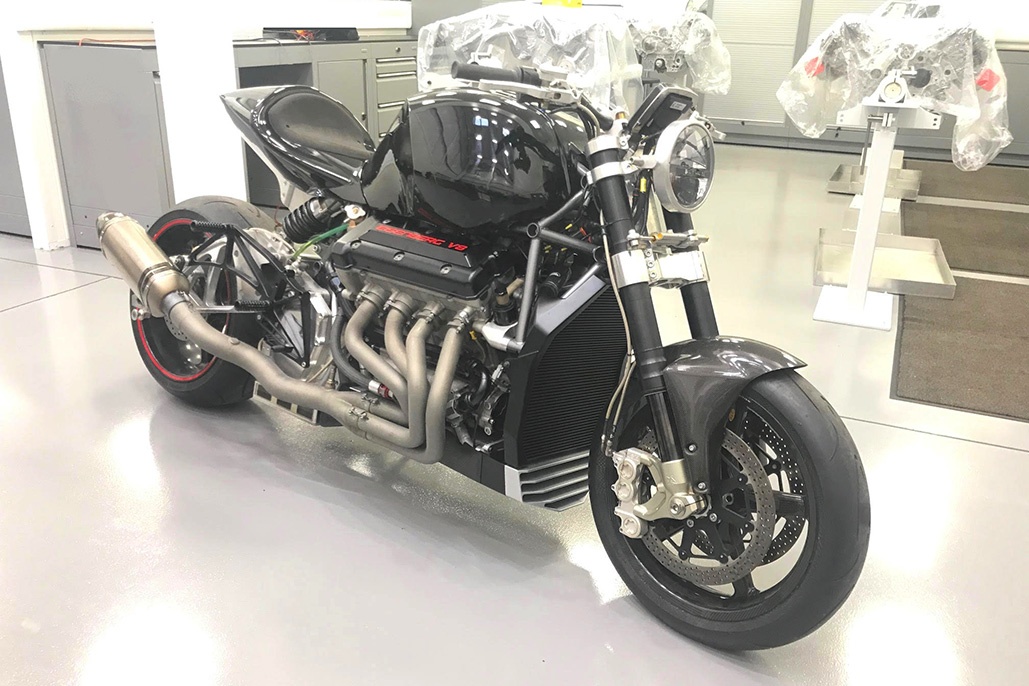 Now in its 15th year, Salon Privé is a must-attend event for any motoring aficionado, and it’s not just cars either. The event has an enviable reputation for attracting best-of-breed motorcycles and motorcars.

The Salon Privé Concours d’Elégance presented by AXA takes place on Wednesday 23 September, and all trophies will be presented at the Motorbike Awards Ceremony on Thursday 24 September with judges, owners and the Duke of Marlborough present.

Confirmed entries include a rare and valuable 1974 Ducati 750SS ‘Green Frame’. One of only 401 produced, all of which were hand-built and overseen by technical boss Fabio Taglioni, this particular example was sourced from Spain by its current owner and returned to the UK for a full restoration. Together with a 1976 750SS by Newton Engineering and 1975 900SS that have also been entered, it completes a full set of iconic round- and square-case Ducati V-twin motorcycles. It will be the first time three examples of this kind have been exhibited together in the UK.

Also from the Ducati stable comes a 1971 450cc Desmo Desert Racer, the only known C&J-framed Ducati ‘single’. It was originally built in Jeff Cole’s California workshop as the ultimate derivation of Taglioni’s masterpiece. The machine was road-registered as a street ‘hot rod’ in California during the 1970s, but was later discovered in 2017 as a rusty anonymous wreck. It has been rebuilt using period accessories and as many of the surviving battered components as possible.

Another Concours debutant is a rare 1948 Norton 500cc Jack Moore Prototype with a remarkable history. In 2014, the remains of one of the second prototype engines became available through an online auction house. Then an article about the first prototype engine (unidentified at the time) appeared in Classic Bike magazine. By late 2018, the current owner had acquired both engines plus enough parts to carry out a complete reconstruction of the road-running motorcycle prototype. After nearly 18 months of careful restoration of the engine, gearbox and chassis parts, the construction of the second Jack Moore Prototype Norton was completed in October 2019. It was back on the road 72 years after first being tested at the Bracebridge factory!

Elsewhere on the lawns of Blenheim Palace, new British manufacturer Langen Motorcycles is set to officially launch its ultra-exclusive two-stroke ‘pocket rocket’ motorcycle. The beautifully engineered 250cc two-stroke is inspired by the ‘ton up’ Café Racers of the 1950s but uses the latest advances in engineering and technology. The fuel-injected motorcycle uses a 90-degree V-twin motor with a counter-rotating crankshaft producing 80bhp at 11,800rpm. Its hand-made aluminium frame and a carbon-fibre body features 24-carat gold-leaf detailing and weighs a mere 112kg. The limited-edition model will be manufactured in only 250 pieces.

Langen will be joined by celebrated Bolton-based manufacturer CCM Motorcycles, which was founded by Alan Clews in 1971 and has gained a reputation for creating the most unique hand-crafted ’bikes in the industry.

To commemorate its 75th anniversary, legendary Italian marque MV Agusta will be making its Salon Privé debut via UK partner Krazy Horse. The latest models will be on display, including the retro-look Superveloce and the Brutale 1000RR – the world’s most powerful ‘naked’ (no fairing) motorcycle. They will be joined by the Dragster SCS and the Rush concept ’bike.

Founded in 1945 by Count Domenico Agusta, the company won its first World Championship in 1952 in the 125cc class, and by the time it withdrew from racing in 1976, it had won 270 Grands Prix and 38 World Riders’ Championships with great names such as Giacomo Agostini, John Surtees and Mike Hailwood.

At opposite end of the spectrum, EISENBERG Racing will officially launch the world’s most powerful and compact production V8 motorbike ever made. Designed and built in Britain in collaboration with Prodrive and EISENBERG racing, the EISENBERG V8 pushes the boundaries of engineering to the extreme.

The modern-day muscle retro looking bike features a 3000cc V8 engine that weighs just 80kg and delivers 480hp. With a flat plane crank configuration, it revs like a Ferrari to 11,000rpm and has a top speed of 250mph! The V8 engine has been specially designed to fit within the tight packaging constraints of a normal motorbike, as opposed to building a motorbike around a large V8 American muscle car engine. Sitting alongside the EISENBERG V8 will be Britain’s fastest naked (no fairing) bike – the road-legal 580hp MADMAX Turbine bike which is powered by a Rolls-Royce turbine from an Agusta 109 helicopter. The bike holds numerous Guinness, World and British speed records with Zef Eisenberg at the helm.

Salon Privé 2020 Refund Policy. This year, you can book your tickets with total confidence with the guarantee of a full refund should the event be cancelled.* On the other hand, should the Government impose maximum event guest numbers which sit above our bookings, we reserve the right to return monies on a last-in, first-out basis.

(*full refunds given in the event of cancellation, excludes private dining bookings)

Above all else, the safety and wellbeing of all who attend Salon Privé this year will be our utmost priority. As such we will have extensive measures in place to encourage hygiene and social distancing, ensuring we meet the Government’s COVID-19 Secure guidelines. Some measures are: –

EDITORS’ NOTES
Now in its 15th year, ‘Salon Privé Week’ is a must-attend series of events for any car enthusiast or aficionado. A Partner Concours to the Peninsula Classics’ Best of the Best’ Award, Salon Privé is now recognised as one of the top events in the world alongside Pebble Beach Concours d’Elegance and Concorso d’Eleganza Villa d’Este. Held annually within the grounds of Blenheim Palace, Salon Privé is firmly established as the UK’s most exclusive Motor Show.

The experts from the International Chief Judge Advisory Group will perform their duties on 23 September, with all bikes being meticulously inspected and class awards decided upon.

The class winners and runners-up are selected by the jury, while the top prize, Most Spectacular Motorbike, is chosen by the Duke of Marlborough.

Presided over by Ed Gilbertson (President of the Jury) and Adolfo Orsi (Chief Judge), the jury consists of specialists from the motorbike world. International restorer and collector Somer Hooker will be joined by Henry Cole – television presenter and CEO of Gladstone Motorbikes. Journalist and concours judge Dennis Frost will also be casting his expert eye over proceedings along with commentator and former Grand Prix motorcycle racer Steve Parrish.

Motorcycle owners who are interested in entering should visit www.salonpriveconcours.com/apply-to-enter or email [email protected] . The Motorbike Owner’s Package is an all-inclusive experience for entrants to enjoy, with delicious luncheon, Pommery Champagne, fine wines and traditional English afternoon tea.

Tickets can be purchased via the website www.salonpriveconcours.com or by calling the Ticket Hotline: 0808 100 2205.

Salon Privé is proud to once again have Rainbow Trust Children’s Charity as its charity partner. The organisation provides emotional and practical support to families who have a child with a life-threatening or terminal illness, and thanks to the generation donations of guests and Concours entrants, the event has so far raised in excess of £1 million for this great cause.