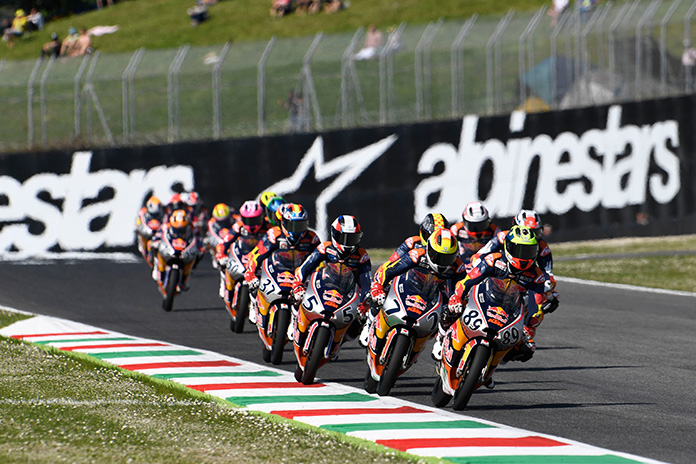 Going into the Italian Grand Prix at Mugello we have already had three winners in four Red Bull MotoGP Rookies Cup races so far this season. Spanish 16-year-old Daniel Holgado heads the points table with Portimão double victor David Alonso, the Colombian 15-year-old, just 4 behind. Brazil’s Diogo Moreira is third thanks to his 3 podiums, the 17-year-old is in his first Rookies Cup season and still looking for a win.

Fourth in the Cup and 13 off the lead is David Muñoz. The Spaniard has just turned 15 and his hoping for his second 2021 victory on the KTM RC 250 R in Mugello having claimed the top step of the podium twice last year with a double at the final event.

Little form
Mugello is going to be very open as only 3 of the current Rookies raced there two years ago. 17-year-old Matteo Bertelle will be very keen for home country success after an excellent 4th in Race 2 in Jerez. Marcos Uriarte was 3rd in Portimão Race 1 but still seeks that illusive consistency that would see him a Cup challenger. The 16-year-old Spaniard is currently 7th, 2 places ahead of Bertelle. Noah Dettwiler, the 16-year-old Swiss, is the third of the Rookies who raced at Mugello in 2019. None of them featured in the results, Uriarte was in the lead battle but fell.

So the form book isn’t going to help pick a winner in Tuscany. Are we headed for a record number of different winners in this year’s 14 races? Last year we had 6 in 12, that’s average. The record is 8 in 14, recorded in 2011, it was the year that Italian Lorenzo Baldassarri became the youngest ever Cup champion at just 14 with 2 race victories. He has of course gone on to be a 5 times GP winner but he was only 4th at Mugello in the single Cup race of 2011.

A very important function
Winning at Mugello has been pivotal in many Cup careers of future World Champions. It is where Johann Zarco’s scored his first Rookies win, one of 4 on his way to taking the Cup in 2007. Brand Binder mounted a Rookies podium for the first time in 2010 and Jorge Martín recorded the first of his total of 6 2014 victories that would take him to Cup victory over Joan Mir.

It’s bound to be a thrilling weekend and for the first time we will have two races. Previously the post MotoGP fan track invasion made a Sunday race untenable, this year the Covid restrictions will allow a Sunday race, a bright spot in a difficult period for everyone.