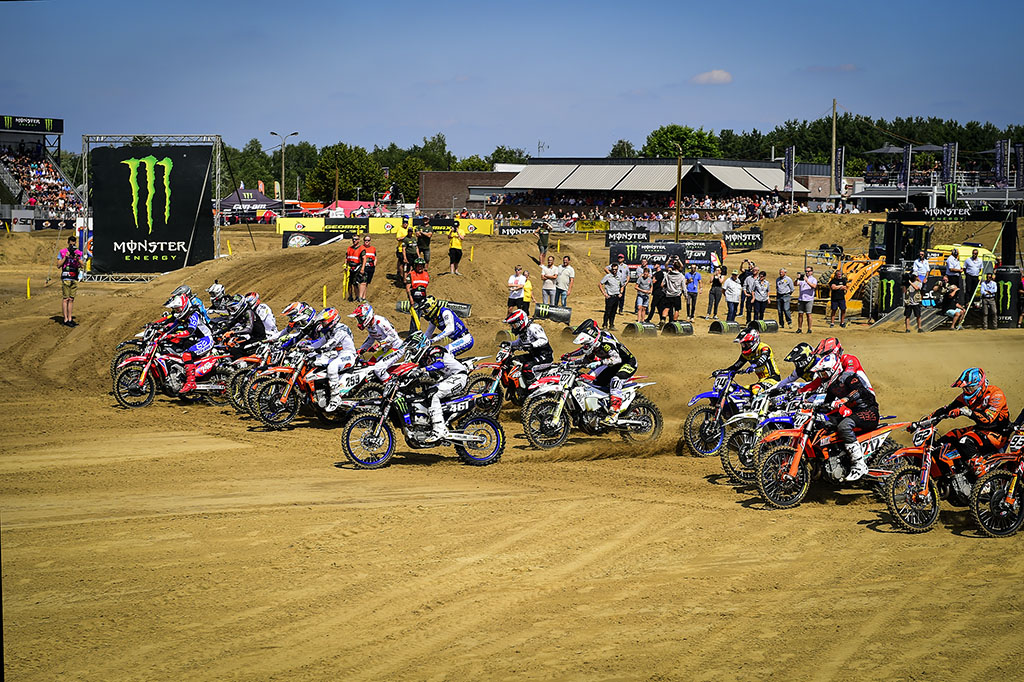 Following the Spanish GP, the FIM Motocross World Championshipis back in the sand, this weekend, for the Monster Energy MXGP of Flanders, the first of three breath-taking races scheduled in Lommel, Belgium.

Lommel, considered to be the heartland of motocross, has played a big part in the motocross world championship for many years, becoming known as one of the toughest sand circuits in the world.

In 1981, the Belgian sand circuit hosted its first Motocross of Nations event, which was a historic day for Team USA who took their very first win at the prestigious event. Though the first motocross world championship race to be held there was not until 1990, that saw Pekka Vehkonen victorious in the 250 class. Other GP winners in the deep sand of Lommel include the likes of Marnciq Bervoets, Stefan Everts, Avo Leok, Ken Roczen, Max Anstie, Jeffrey Herlings, Antonio Cairoli and Tim Gajser, among many others.

Lommel is a home for many of the GP riders, with the majority of them living in the surrounding areas to the track. Many of the teams are based close by too, so it is fair to say that every one of the riders lining up for the next three races has done plenty of laps around the deep sandy circuit, though this is exactly what will make the racing that much more interesting as the competition will be fierce, as we reach the crucial stages of this year’s FIM Motocross World Championship. This year the track is bound to get an overhaul for the Monster Energy MXGP of Flanders with a modified start layout.

The next rounds in Belgium, will also conclude the EMX250 and EMX125 Presented by FMF Racing championships, that are currently led by Hutten Metaal Yamaha Racing’s Thibault Benistant, who has an 18-point advantage to Husqvarna Junior Racing Maddii pilot Mattia Guadagnini in EMX250. Meanwhile in the 125 category, Fantic Racing’s Andrea Bonacorsi leads the way by 42 points.

In MXGP, Team HRC’s Tim Gajser will enter the Monster Energy MXGP of Flanders 24 points clear of his championship rival Antonio Cairoli of Red Bull KTM Factory Racing. Also having won the MXGP of Belgium last season, with a 2-2 result, Gajser will be among the favourites for this weekend, as he looks to extend his lead even further.

Meanwhile Cairoli, will no doubt aim to continue with his consistent top 5 results. Throughout the entire season we have seen Cairoli battle inside the top 5 which has worked well for him, as he is still in contention of this year’s world title. Though his recurring knee injury has made it hard for him to push further, though despite that he has accumulated 5 podiums, 2 overall victories and 2 race wins so far this season, so it will be interesting to see if he can add anymore over the next three races.

Monster Energy Yamaha Factory Racing’s Jeremy Seewer lost a bit of ground in Spain which has allowed Red Bull KTM Factory Racing’s Jorge Prado to edge closer to the top 3 in the championship standings. Last season, Seewer was close to a podium finish in Lommel and only missed out by 6 points, after finishing 4th and 5th in the races. No doubt coming into this weekend, he will be looking to re-group and get back to the championship chase as he’s now 21 points down on Cairoli, with 6 rounds remining.

Meanwhile, Prado will enter the Monster Energy MXGP of Flanders with a big confidence boost and motivation from his overall victory on home soil a week earlier, as he looks to take third in the championship from Seewer. Prado has had an incredible run so far, with a total of 13 Fox Holeshots and 6 podium finishes, the second highest of the class, bearing in mind this is his rookie season. And the young Spaniard knows what it’s like to win in Lommel as he has done in 3 times before, winning in MX2 in 2017, 2018 and 2019.

Romain Febvre of Monster Energy Kawasaki Racing Team is another strong contender for the weekend, as last season he was only 1 point off the overall win in Lommel, after winning race 1 and finishing 4th on race two. Despite missing two races at the start of the 2020 season due to injury, the Frenchman has been making good progress with his comeback and getting settled with the new bike and team as he has made 3 podium appearances this season so far, including his overall GP win in Mantova.

Standing Construct GasGas Factory MXGP rider Glenn Coldenhoff is another threat for the podium in Lommel. He was third overall last time around and has always been known to be strong in the sand. He is also another one of the 7 riders to win an overall this season, having won in Latvia, so clearly, he has what it takes to win once more.

This will also be the home GP to Monster Energy Kawasaki Racing Team’s Clement Desalle, Brent Van doninck and Honda SR Motoblouz Jeremy Van Horebeek, with the three no doubt wanting to impress on home soil as well, especially Desalle, who recently announced his retirement at the end of the season.

In MX2, there is no doubt that the battle for the win will include the likes of Red Bull KTM Factory Racings’ Tom Vialle, Jago Geerts of Monster Energy Yamaha Factory Racing and Thomas Kjer Olsen, the rider of Rockstar Energy Husqvarna Factory Racing.

Vialle will enter the Belgian GP this weekend off the back of his overall victory in Spain, which is his 5th of the season so far. He is also 52 points clear of Geerts, which gives him a bit more breathing room, though he cannot afford to relax, as Geerts will no doubt want to impress at his home Grand Prix.

For Geerts his biggest boost will be the fact that he is going to be racing very close to his home for the next three GP’s. Last year Geerts finished 2nd and in race 1 and then DNF’d the second race due a bike issue and this year he will no doubt aim for more consistent results in order to get to the top of the box on home soil.

Meanwhile, Olsen, has been continuing with his positive progress over the last several GP’s as he scored his 4th consecutive podium in Spain last weekend. Though he is out of the title chase this season, there is no doubt that the Dane will want to finish the year on a high, as he prepares to enter the MXGP class next season. Last year the MXGP of Belgium was an unlucky one for the Husqvarna rider who DNF’d the first race, and the finished 5th in race two, which of course cost him vital championship points, though this year without the pressure of the title, we could see Olsen at his best, and maybe even see him take a 3rd overall win of the season.

Following his success last year, Monster Energy Yamaha Factory Racing’s Ben Watson will no doubt be aiming for top results in Lommel, as he looks to get back on the podium. Watson has been one of the few riders who have been extremely close to the podium this season, and maybe his achievement from last season will give him the boost that he needs to get the job done.

Then there’s also Roan Van de Moosdijk of F&H Kawasaki who will want to show his skill in the sand. Last season the Dutchman dominated the EMX250 class in Lommel, with two race wins, which helped him along his way to claim the EMX title at the following round.