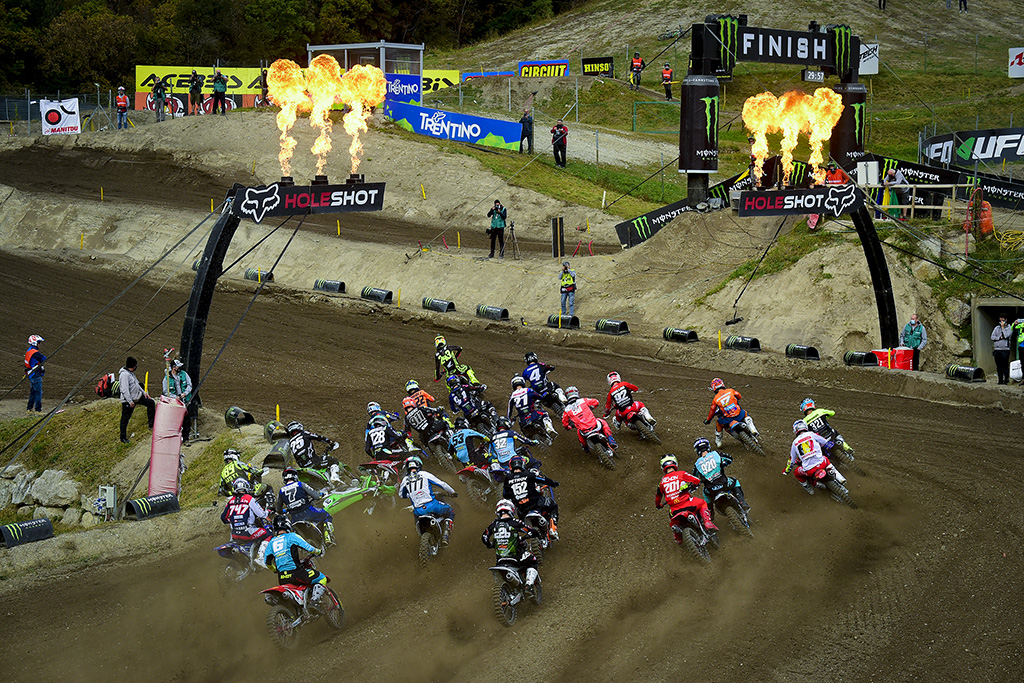 Just two Grand Prix’s remain of this MXGP season, as we head into the penultimate round of the 2020 FIM Motocross World Championship with the MXGP of Pietramuratafor a mid-week special here in Italy.

So far, we have been treated with some amazing racing, which has been topped off with great weather and breath-taking views surrounding the circuit.

In addition to the Grand Prix of Pietramurata, the 17th round of the FIM Motocross World Championship will also see the penultimate rounds of the EMX2t Presented by FMF Racing and EMX Open Championships. In the EMX2t, it’s Brad Anderson of Verde Substance KTM who leads the championship by 49 points ahead of Eugenio Barbaglia and Federico Tuani from Husqvarna Junior Racing Maddii. In order to seal the deal, Anderson will need to finish ahead of Barbaglia in both races, in order to claim the title by the end of the day.

Meanwhile in the EMX Open championship, things are much closer as the title chase will no doubt head into the final round this weekend. As it stands, Karel Kutsar leads the championship by 12 points over Kim Savaste of 137 KTM Motorsport. Meanwhile Toms Macuks is third a further 21 points back. During the previous round of Trentino, it was Jimmy Clochet who put on a showstopping performance to take the double race victory on his wildcard appearance, to claim his first podium in the EMX championship. Meanwhile Davide De Bortoli and Macuks joined him on the podium, with both getting two consistent results of 2-2 and 4-4.

Heading into the MXGP of Pietramurata, Gajser has a comfortable championship lead over Cairoli, as he goes after his 4th world title. And while there are 73 points between the two championship rivals, things are not over yet.

Yesterday Cairoli claimed his 92nd Grand Prix victory, after two strong battles at the top end of the field, which saw him finish second in both races. While for Gajser, the day was a mixture. He won the opening heat quite comfortably, though the second one was much tougher as he didn’t quite get the start and then struggled to make passes which meant he had to settle for fourth. Of course, as he enters the next two races on Wednesday, of what will most likely be the races he claims the title, he will no doubt be pushing to add some more race wins to the 13 he has racked up this season so far.

Monster Energy Yamaha Factory Racing’s Jeremy Seewer remains third in the championship just 18 points down on Cairoli and still has a chance to go for silver. Yesterday, the Swiss finished the races 3rd in the first race, and 5th in race two, after a small crash, which cost him the lead early on in the race. He now has a 48-point advantage to Romain Febvre of Monster Energy Kawasaki Racing Team who has moved himself up into 4th in the standings.

The biggest surprise of the previous GP came from Clement Desalle of Monster Energy Kawasaki Racing,who claimed his first race win since Russia 2018 and also got himself on the podium for third overall. Now with his retirement from GP’s fast approaching, it will be interesting to see what he can do during the upcoming races, as he prepares to hang up his MXGP boots. The same goes for Monster Energy Yamaha Factory Racing’s Gautier Paulin who had some solid results yesterday and missed out on the podium by just two points.

It’s worth to mention that, Gebben Van Venrooy Yamaha Racing’s Alessandro Lupino was looking strong in the races too, as he challenged well inside the top 10 to claim his best GP result of his career, with a 6thoverall. With two GP’s left, it would be good to see the Italian continue this momentum and possibly fight for a podium spot.

In MX2, Vialle will no doubt be looking to make the perfect day on Wednesday as he goes after his maiden world title. With 73 points separating him and Geerts, it will be a tough task for the Belgian to claim as many points as possible to keep the championship chase alive, but there is no doubt that the factory Yamaha rider will push for a strong end to the season either way, as he looks to add more race wins to his existing 13 and maybe go for a 6th GP win, as he claimed the overall yesterday.

Meanwhile, Yamaha SM Action MC Migliori J1 Racing’s Maxime Renaux is still holding on to third place in the standings with a 16-point lead. He finished yesterday’s races in 8th and 5th, while Rockstar Energy Husqvarna Factory Racing’s Thomas Kjer Olsen had some more stronger results, as he took the race win in the opening heat and a 4th in race two, which has also got him up to 4th in the championship, just one point ahead of his teammate Jed Beaton who has dropped to 5th.

For Beaton, the speed in the races is there, as he clearly proved this with the TAG Heuer Best Lap in race one, but it’s the consistency in the races that is proving difficult. He was third in the opening race, while he finished the second heat 9th.

There was also a surprise in MX2, as this year’s EMX250 Champion, Thibault Benistant put in an incredible performance in the second race, as he battled with Vialle and Geerts to eventually finish the race in second, behind Geerts and ahead of Vialle. It will be good to see if he can run with the leaders once again during Wednesday’s races, giving us all a glimpse of what can be expected from the newest Monster Energy Yamaha Factory Racing’s recruit in 2021.