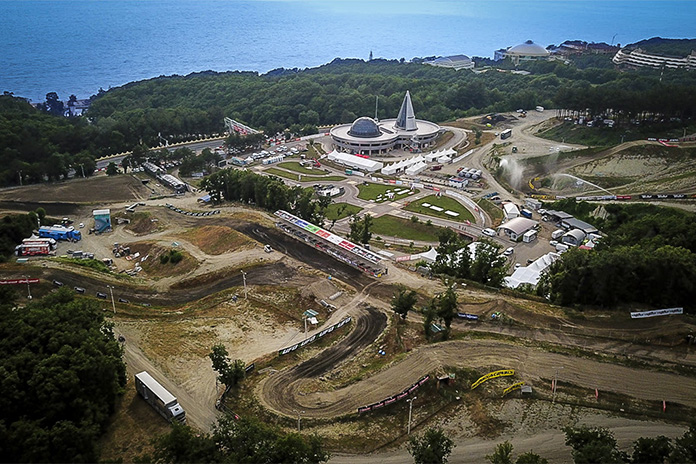 Finally, the wait is over and the 2021 FIM Motocross World Championship is set to begin this weekend in the beautiful seaside location of Orlyonok for the MXGP of Russia!

After missing out on a Grand Prix in Russia last season due to COVID-19, MXGP will return to the hilly hardpack circuit for the first time since 2019, which will also be the fourth time that the FIM Motocross World Champion will take place in Orlyonok.

Back in 2017, Clement Desalle and Pauls Jonass were the first riders in MXGP and MX2 to win at the newly introduced track, with the pair still holding the record for the most GP wins at the Russian circuit, with two victories each. Though with Desalle retired from the Motocross World Championship, this gives Tim Gajser, the winner of the Russian Grand Prix in 2019 a chance to equal the Belgian’s record – but of course with Jonass now in MXGP and back to full health, we could see the Latvian make the perfect comeback to GP racing with a third win.

Last time MXGP was held in Russia was back in 2019 that saw Gajser and Jorge Prado dominate the field with the pair winning both races to take a secure GP victory each. But with Prado moving up to the premier class last season, this now leaves the door open for a brand-new MX2 winner in Orlyonok.

In MXGP, there is no doubt that Team HRC’s Tim Gajser will look for a strong start to his 2021 campaign as he defends the MXGP title for the second consecutive year. Though he’s got quite a field of riders up for the challenge with Jeffrey Herlings of Red Bull KTM Factory Racing making his return to racing following last season’s injury, along with fellow KTM factory rider, Antonio Cairoli looking to make a good start on his 10thworld title chase.

Of course, there’s also Monster Energy Yamaha Factory Racing’s Jeremy Seewer who last time around finished third on the podium and was last year’s runner up in the MXGP World Championship standings. Arnaud Tonus from the new Hostletter Yamaha Racing Team will also look for another podium finish in Russia, after finishing second in 2019.

And there’s also the two rookies, Thomas Kjer Olsen of Rockstar Energy Husqvarna Factory Racing and Ben Watson from Monster Energy Yamaha Factory Racing to consider, with both riders having both been on the podium in Russia before during their MX2 careers, with Olsen finishing third in 2019 and Watson on the third step as well in 2018.

You can’t forget Pauls Jonass of course who currently matches Clement Desalle’s record for the most wins at the hilly circuit, with a GP win in 2017 and 2019 while he was in MX2. A win or a podium could be the perfect comeback for the Latvian who will line-up in Russia with his new team, Standing Construct GasGas MXGP.

Additionally, we have Romain Febvre and Ivo Monticelli from Monster Energy Kawasaki Racing Team who will be looking to impress at the opening round this weekend. For Monticelli this will be one of his first outings with his new team, so no doubt he will be keen to put on a solid performance.

The 2021 season will also welcome a new team and manufacturer to the roster, with SDM Corse Beta Racing Team making their World Championship debut with Jeremy Van Horebeek and Jimmy Clochet.

Italian Alberto Forato of SM Action Racing Team will make his season debut in MXGP, with the GasGas rider making the decision to move up to the 450cc class during the off-season.

Unfortunately, Arminas Jasikonis of Rockstar Energy Husqvarna Factory Racing and Team HRC’s Mitch Evans will not line up in Orlyonok as they continue to gain their strength back after injury.

In MX2 things are bound to be interesting with plenty of new faces make the move up the 250cc category.

But the pair will come under new challengers, with Maxime Renaux looking like one of the main protagonists for the title this season as he joins Geerts in the Monster Energy Yamaha Factory Racing squad. Renaux has proven that he can ride very well on hardpack circuits, so Orlyonok should be a good fit for him.

Of course, there’s also his teammate Thibault Benistant, last year’s EMX250 Champion, who will make his season debut in Russia and will be keen to make an impression, like his ride during the MXGP of Pietramurata last year where he finished third in the second race. Additionally, we have Mattia Guadagnini, EXM250 runner-up, also joining the MX2 class for 2021 as part of the Red Bull KTM Factory Racing team, which is a big move for the young Italian.

Others to look out for in Russia include F&H Kawasaki Racing’s Mathys Boisrame, Roan Van De Moosdijk and Mikkel Haarup, with all three possible podium contenders, especially Boisrame who has always been a strong hardpack rider and van de Moosdijk who was victorious in Orlyonok back in 2019, the same season he won the EMX250 Championship.

For Rockstar Energy Husqvarna Factory’s Jed Beaton the 2021 season will be his last opportunity to go for top positions in MX2, as the age rule in the 250cc category will mean he will need to move up at the end of the year. Nonetheless Beaton had some strong results in 2020 and will no doubt go for more podium positions this time around. While his young teammate Kay De Wolf will make his season debut with the ‘big boys’ in MX2 after moving up from the EMX250 class, where he often challenged for top positions.

It’s all to play for in Russia, with both classes stacked with talent! Make sure you tune in this Sunday on www.MXGP-TV.com to find out who comes out on top!