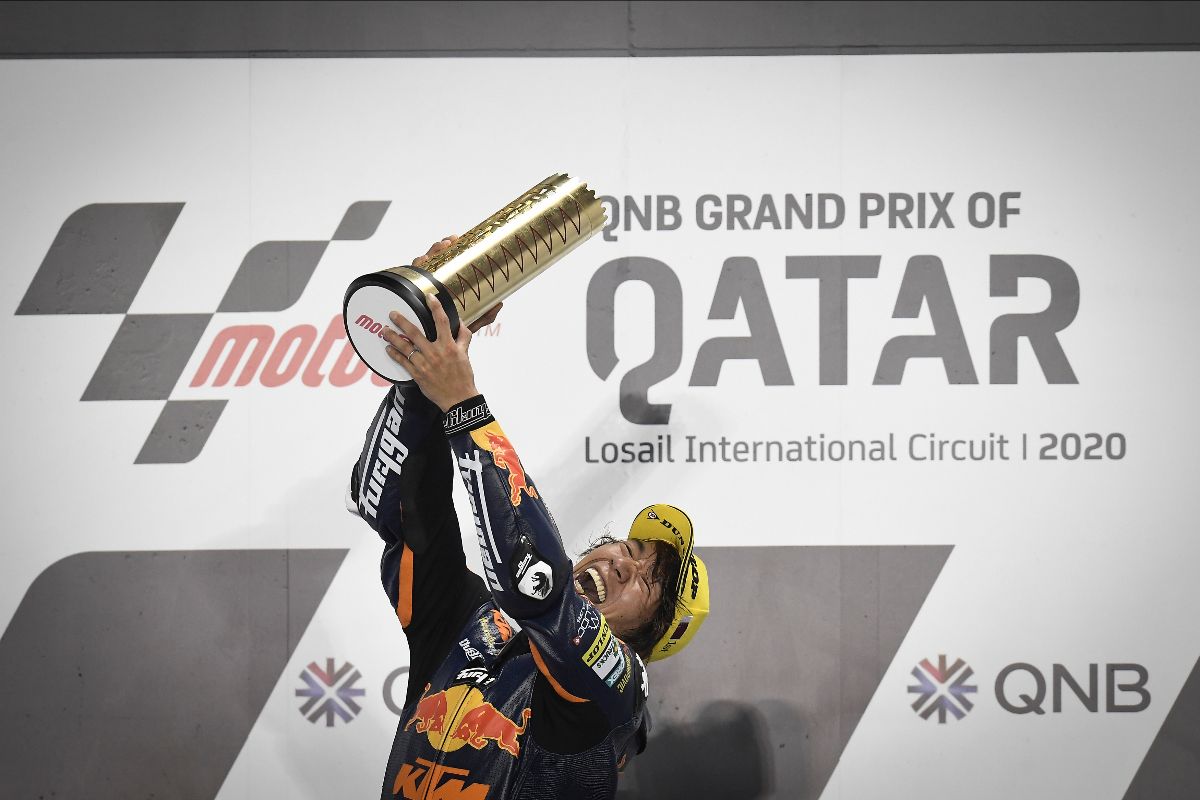 Tetsuta Nagashima (Red Bull KTM Ajo) blew the competition away in the final stages of a top class Moto2™ race at the QNB Grand Prix of Qatar, claiming his first Grand Prix victory in style – 10 years on from late friend Shoya Tomizawa’s first Moto2™ win at the same track. 2019 Qatar GP winner Lorenzo Baldassarri (FlexBox HP 40) claimed P2, battling it out with Enea Bastianini (Italtrans Racing Team) to the end as the ‘Beast’ picked up his second intermediate class rostrum in third.

It was Luca Marini (Sky Racing Team VR46) who took the holeshot from second on the grid, the Italian quickest off the mark as polesitter Joe Roberts (American Racing) slipped back to third, Bastianini also attacking the American to make it an Italian 1-2. The number 33 didn’t take long to attack for the lead either, with the two duelling as Roberts then came under pressure for third from Jorge Martin (Red Bull KTM Ajo).

The star of the mid-part of the race was about to take over at the front, however, as Marini moved for the lead and began to push to make a gap. But Roberts was up into second and the closest challenger for some time, with the group behind then descending into varying levels of chaos and genius as the moves came thick and fast.

Lap 6 then saw Roberts go for an overtake at Turn 1 but the American ran wide, handing the position back to Marini. By Lap 8, just a second and a half split the top eight, with Bastianini, Baldassarri, Xavi Vierge (Petronas Sprinta Racing), Marco Bezzecchi (Sky Racing Team VR46) and Warm Up pacesetter Nagashima setting similar lap times. However, Marini then started to stretch the field, taking just under half a second out of second place Roberts on Lap 9 and 10 and on Lap 11, the gap was up to 0.9 seconds as another personal best lap was slammed in by the SKY VR46 rider. Could anyone respond?

By Lap 12, the gap was back down to six tenths and Nagashima was starting to look a serious threat in P5 having gone over half a second quicker than Marini that lap. With eight to go the Japanese rider was up to P4 past Bastianini, sat just over a second behind race leader Marini, and the Moto2™ race in Qatar was shaping up nicely as the battle entered the final seven laps…

Beta Tools Speed Up’s Jorge Navarro was starting to reel the leaders in too. Just as he did for much of 2019, the Spaniard was coming into his own on used tyres and with little over five laps remaining, a mistake from Marini allowed the leading six to bunch up and Roberts led. Bastianini then snatched the baton with five to go, and suddenly it looked like it was game over for Marini as he began to plummet. The leading four were now Baldassarri, Bastianini, Roberts and Nagashima with four to go, and the Japanese rider was looking ominous in his mission to the front. The Ajo rider first picked off Roberts for P3 before taking control of the race at Turn 2 with three to go – and immediately starting to creep away..

The number 45 had three tenths in his pocket as the race entered the final two laps, with the battle for the remaining podium places starting to heat up. Remy Gardner (Onexox TKKR SAG Team) was latching onto the back of Navarro as five riders scrapped it out behind Nagashima, who – by the time he’d clocked onto the final lap – was over then a second clear. Simply stunning latter race pace for the Japanese rider made victory suddenly seem a done deal, and Nagashima would make no mistake on the final lap to take an emotional first Grand Prix victory – 10 years since Tomizawa, who was “like a brother” to him, made history in 2010.

Behind him, it was a close but clean fight to the flag. Baldassarri and Bastianini battled it out with some brutality to decide the podium, crossing the line with almost nothing to split them, as Roberts took his best Grand Prix finish in fourth after an impressive weekend – including going fastest on Friday and taking pole. Fifth went the way of Gardner after the Australian made up some impressive ground in the latter stages, ahead of Navarro, who was forced to settle for sixth.

Bo Bendsneyder (NTW RW Racing GP) slipped back from his second row qualifying on Sunday, but nevertheless brought home a good haul of points in P11, ahead of Marco Bezzecchi by the flag. Fabio Di Giannantonio (Beta Tools Speed Up) was 13th, just beating Jake Dixon (Petronas Sprinta Racing) to the line by 0.016. The Brit was involved in the late race incident that put paid to Marini’s chance at points too as the two got a little close and the Italian crashed out, rider ok. Stefano Manzi (MV Agusta Forward Racing) therefore completed the points.

That’s it from the Moto2™ season opener at Losail International Circuit, with plenty of drama and action to tide us over until the next race. After his emotional and stunning win, Nagashima heads the standings for the first time in his career – can he retain that next time out?