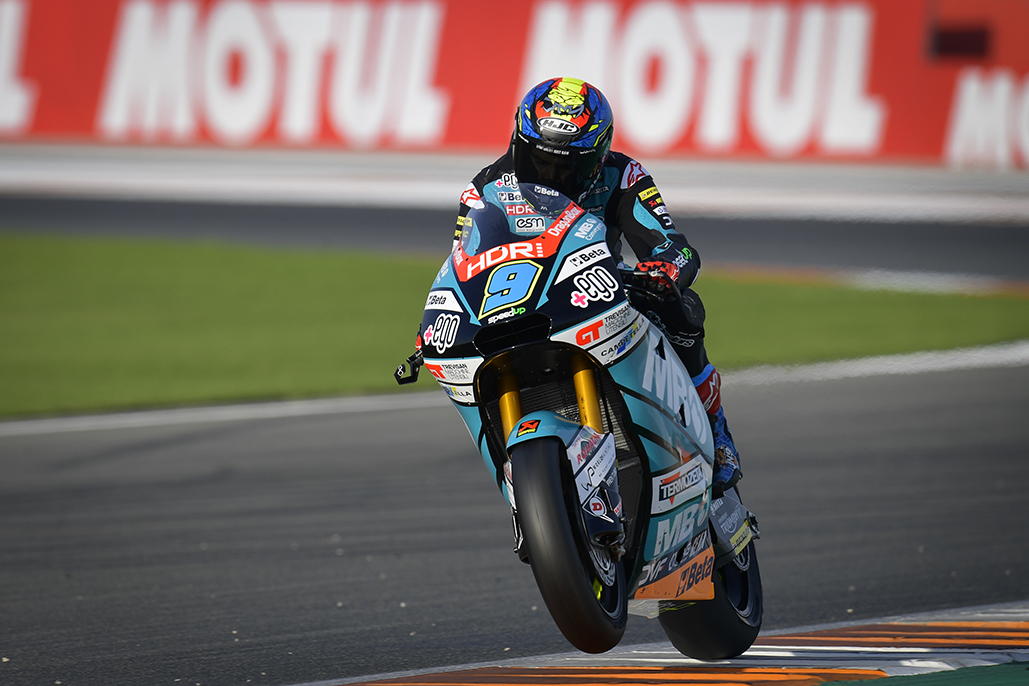 The home hero ends the day on top, with Marini second, Lowes fourth and Bastianini sixth on Friday.

Jorge Navarro (MB Conveyors Speed Up) narrowly took to the top on home turf on Friday, beating Championship contender Luca Marini (Sky Racing Team VR46) by just 0.025 on Day 1 of the Gran Premio Motul de la Comunitat Valenciana. Fabio Di Giannantonio (MB Conveyors Speed Up) completed a top three split by just 0.038. Title contender Sam Lowes (EG 0,0 Marc VDS) was fourth and within 0.102, with points leader Enea Bastianini (Italtrans Racing Team) starting the weekend off in sixth but only 0.157 down despite a crash as the timesheets tightened in Valencia.

FP1
The day began with Navarro in charge ahead of Marini, with the Spaniard only half a second off his own lap record as action got underway again in Valencia. ‘Diggia’ made it the same top three in the morning as overall too, although the number 21’s fastest in FP1 wouldn’t quite be his quickest of the day.

Lowes slotted into fourth, ahead of a solid opening session from Marcel Schrötter (Liqui Moly Intact GP) as the German homed in on the top – fifth but still within a tenth and a half of Navarro’s quickest lap.

Bastianini started the day ninth but only a quarter of a second off the top, with Moto2™ tight as ever.

FP2
In the afternoon, ‘Diggia’ hit back to top the timesheets, with Lowes moving up into second but just 0.090 off. Bastianini was only 0.029 off his closest title rival as he took third too, with Marini the title hopeful to get shuffled back as he ended FP2 in P8.

Overall it’s a shuffle between the two sessions. Navarro’s FP1 time leads the way ahead of Marini’s morning effort, with Di Giannantonio third overall from his session-topping FP2 lap. Lowes and Schötter slot into fourth and fifth by virtue of their fastest efforts from FP1.

Bastianini ends the day in sixth from his FP2 laptime, although the Italian took a tumble at Turn 6 in the afternoon. Hector Garzo (Flexbox HP 40) is seventh as the second home hero on the timesheets impressed once again. Bendsneyder’s afternoon lap slots him into eighth, ahead of Inde Aspar Team Moto2’s Aron Canet as he builds back up following injury. Lorenzo Baldassarri (Flexbox HP 40) completed the top ten.

Will the weather change on Saturday morning? Are the title contenders safely through? Find out at 11:55 (GMT +1), before qualifying from 15:50.