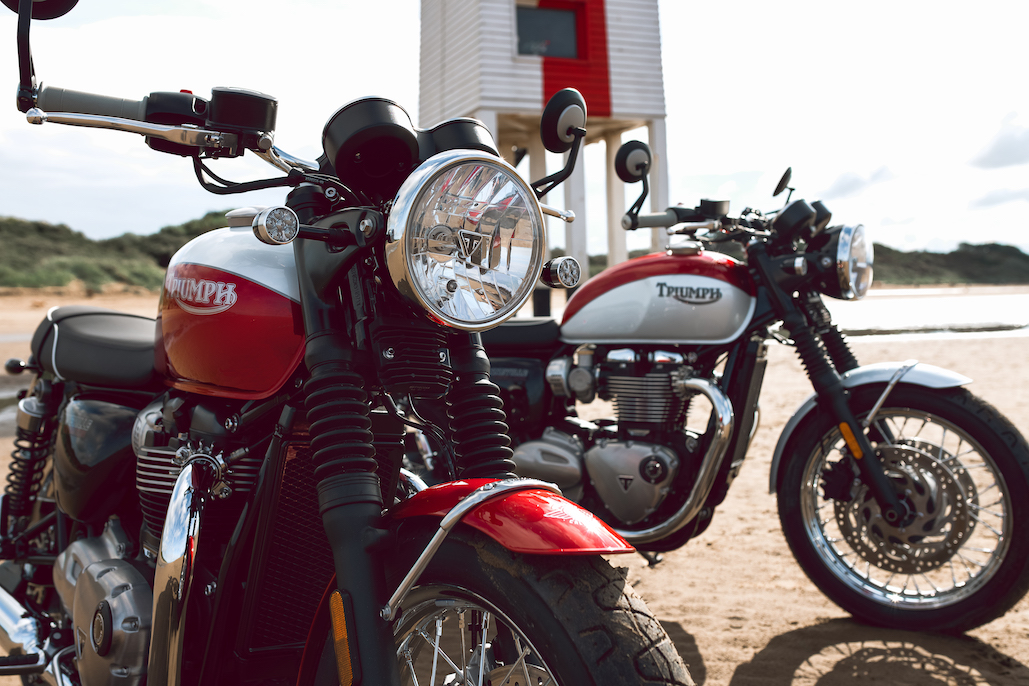 In 2020, Triumph will launch two very special editions of the iconic Bonneville T120 and T100 that celebrate the iconic name and legend of Bud Ekins. A 1960s motorcycle icon, Bud was a professional Hollywood stuntman, top motocross and desert racer, and the rider who made arguably the most famous motorcycle film jump in history in the WWII film The Great Escape on behalf of his movie star friend and ISDT partner Steve McQueen. These two new beautiful special editions feature a one-off Californian inspired Bud Ekins paint scheme and a range of dedicated special details and touches.

In addition to their unique paint scheme, the T120 and T100 Bud Ekins Special Editions also feature a host of premium details that further enhance their individual style and one-off positioning, including;

As these are official Triumph Special Edition motorcycles, each Bud Ekins Bonneville T120 and Bonneville T100 motorcycle is sold with a certificate of authenticity, which includes an exclusive account of Bud Ekins’ incredible story and is signed by Triumph’s CEO Nick Bloor and Bud Ekins’ daughters, Susan and Donna Ekins.

BUD EKINS – DESERT RACER.  STUNT RIDER.  GENUINE MOTORCYCLE LEGEND.
Born in Los Angeles in 1930, Bud Ekins learned to ride in the nearby Hollywood Hills, honing his off-road skills long before he could legally ride on the road.  Luckily, California was host to a thriving off-road racing fraternity and even by his late teenage years he earned a mighty reputation as one of SoCal’s top motocross and desert racers.

By the time US Triumph superdealer Bill Johnson provided Ekins with a TR5 Trophy, on which he won the Catalina Grand Prix, Ekins knows well that in Triumph he has found a manufacturer that builds the kind of strong, fast and light motorcycles with all the agility, responsiveness and power that he yearns for.

Ekins’ success in the mid-fifties coincided with Triumph’s emergence as a major player in world motorcycling, with both parties playing their roles in re-defining what a motorcycle was capable of. Triumph’s famous managing director and design chief, Edward Turner, continued to develop incredible Triumph twin engine motorcycles which were becoming increasingly powerful, efficient and reliable. Johnny Allen held the 1955 and 1956 motorcycle land speed world records using Triumph factory engines, and Ekins was forging a lasting alliance with Triumph motorcycles that would ultimately see him regarded as America’s top off-road racer and also a celebrated Triumph dealership owner.

TOP US DEALERSHIP
Shrewdly understanding the massive potential and performance superiority of Triumph motorcycles in the context of an emerging popularity for the more reliable, lightweight and powerful British bikes, Ekins’ racing successes led him to open a Triumph dealership in North Hollywood.

It quickly became a magnet for many young up-and-coming movie actors including Paul Newman, Clint Eastwood and Steve McQueen.  Ekins lived and breathed Triumph motorcycles and selling them seemed to come naturally, leading to considerable business success to go with his considerable racing achievements.

STEVE McQUEEN
One local motorcycle enthusiast at that time was Hollywood’s legend Steve McQueen. His favourite early bike was his TR5 Trophy, serviced by none other than Ekins’ dealership where the pair struck up an instant rapport. Ekins introduced McQueen to the burgeoning Californian desert racing scene and McQueen was instantly hooked on this exciting underground movement, spending as much time as he could either hooning across the dunes or just enjoying the anonymous normality of passing time with Ekins and his riding buddies back at the dealership.

In spite of the demands of running a successful Triumph dealership, Ekins was still racing, successfully competing in several off-road races including the Hare and Hound, Mint 400 and Baja 1000 (which he helped establish).  McQueen often joined him to race, often using another name to withhold his identity to organisers and other competitors.  He was a fast learner and a fast rider, and as Ekins was such a highly regarded rider who had previously represented the US in the incredibly high profile International Six Days Trial, regarded as the Olympics of motorcycling, he facilitated McQueen’s famous entry to ride for the US team in the 1964 East German ISDT – both on Triumphs. Ekins would go on to win an impressive four ISDT Gold Medals in just seven years.

THE GREAT ESCAPE
In autumn 1962, McQueen was preparing to fly to Europe for filming what would become one of the following year’s highest grossing movies, The Great Escape. McQueen pushed for motorcycle stunt riding in the film and recommended his good friend Bud Ekins to the producers. Ekins was employed on a four-month contract, though it took far less than that for McQueen (with Ekins’ help) to conceive of and rewrite the dramatic highlight to his character’s storyline.

McQueen’s character, Captain Virgil Hilts has escaped a prisoner of war camp, commandeered a bike, and is being chased through stunning meadows in an attempt to locate the Swiss border. As enemy soldiers close in, Hilts must desperately make a spectacular motorcycle jump over a high barbed wire fence, and thereafter reach the relative safety of neutral Switzerland.

Between them, using small trial and error practice jumps, McQueen and Ekins worked out the capabilities of their favourite off-road choice, a 650cc Triumph TR6 Trophy, to squeeze maximum dramatic effect from the scene. They calculated that an 80mph run-up was required to clear a raised twelve-foot barbed-wire fence onto an inclined landing area around 60ft away. All on grass. McQueen was sensibly prevented, by the movie’s insurers from performing the stunt himself, much to his frustration, so Ekins stepped in.

The jump is one of the most iconic moments in Hollywood movie history which still lives on in this way today.  In 1962 a TR6 Trophy would redline at 6,000rpm with peak power at around 42bhp, but the powerful Triumph engine’s responsiveness and the torque from the parallel twin made it McQueen and Ekins’s first choice, and the restored bike on which Ekins successfully completed the jump as seen in the movie is currently on show at Triumph Motorcycles’ Factory Visitor Experience at Hinckley, which is open free of charge to the public.

HOLLYWOOD STUNT RIDER
Bud Ekins’ racing success and friendships opened up a new career path. As ‘that jump’ gained distinction as the most famous motorcycle stunt ever seen in a movie, the demand for Ekins as a stunt rider increased. Considered one of the best in Hollywood, he’d continued performing movie stunts for the next 30 years or so, happily returning to continue his dealership business in between filming responsibilities.

Built specifically for the modern classic riding style, with immediate and exciting torque delivery, it produces a peak torque figure of 105Nm at a low 3,100 rpm – an amazing 54% more than the previous air cooled Bonneville T100 generation.

With the pinpoint accuracy and instant throttle response of Triumph’s next generation ride-by-wire fuel-injection and engine management system, the six-speed 1200cc Bonneville engine is engineered with a charismatic tone and 270° firing interval for characterful, linear power delivery.

Behind the 1200 engine’s stylish exterior sits a cutting-edge liquid cooling system, carefully integrated to minimise its visual impact whilst achieving cleaner emissions and enhancing fuel efficiency – 13% better than the previous air-cooled generation. This, combined with an extended service interval of 10,000 miles (16,000km) dramatically reduces the overall cost of ownership.

Finally, elegant peashooter style exhausts follow a clean ‘straight line run’ achieved through an ingenious twin skin design that covers the pipe run through the cat box and out again. It delivers the true sound of a British twin, with a deep and rich exhaust note that truly matches the T120 character, tuned to a level you would want and expect.

Modern capability
The Bonneville T120 Bud Ekins Edition shares all of the T120’s advanced standard of capability, with a wealth of rider-focused technology to deliver exceptional control, safety and enhanced rider confidence – integrated sensitively and without compromise to maintain the authentic Bonneville style and character.

Torque assist clutch              Bringing a light touch and feel to the clutch to make it easy to ride, and ride longer.

Additionally riders can add accessories which would also then be accessed via the clock display, including cruise control.

Original styling
Inspired by the legendary ’59 Bonneville, the new Bonneville T120 has been crafted to incorporate more of the original’s DNA and iconic styling cues, detailing and features.

From the overall Bonneville silhouette, to the sculpted flowing lines of the fuel tank, the intricately detailed badges, lights and stunning twin clocks, the T120 is a timeless icon, beautifully evolved.

Specifically tuned to achieve high torque low down, it produces a peak torque figure of 80Nm at 3200 rpm – an increase of 18% on the previous air cooled generation Bonneville T100 for a more thrilling and engaging ride.

With enhanced throttle response from Triumph’s ride-by-wire fuel injection and a slick five-speed gearbox the T100 is engineered to deliver a 270° firing interval for a smooth, linear power delivery. A cutting-edge liquid cooling system, carefully integrated into the distinctive character of the Bonneville, reduces fuel emissions and significantly improves fuel efficiency by up to 29%. This, combined with an extended service interval of 10,000 miles (16,000km) dramatically reduces the overall cost of ownership.

The T100 distinctive twin pea-shooter silencers are crafted in a classic style and come with the Bonneville’s ingenious twin skin design for a superb finish and clean line, delivering a unique rich exhaust note for the unmistakeable sound of a British Twin.

Modern capability
The Bonneville T100 Bud Ekins Edition shares all of the standard T100s high quality detailing, finish, matched by its modern capabilities, which includes a host of rider-focused technology for maximum control and safety.

From the extensive optional accessory range, cruise control and heated grips are available.

One of the key highlights of the T100 is the chassis and suspension set-up designed with a low seat height for advanced comfort levels for the rider, giving a great overall riding experience whether for long distance journeys, every day use or with a pillion.

The T100 features a unique longer rear suspension unit and cartridge front forks which work together to offer the rider an engaging yet easy-going riding experience.

The T100 is lighter than the T120 and also has a shorter wheelbase, rake and trail than the previous generation T100. This combined with the low seat height and relaxed riding position, make it more accessible and easier to ride than ever before for every rider.

To further enhance the superior handling of the T100, the bikes is fitted as standard with custom developed Pirelli Phantom Sportscomp tyres, designed especially by Pirelli for the Bonneville family with stiffness and profile changes to the front tyre, and deeper tread on the rear for secure handling and improved durability.

Inspired by the legendary ’59 Bonneville and styled to incorporate more of the iconic design, silhouette and character of the original, the T100 has its own distinctive character, enhanced by the premium finishes and signature touches of a genuine motorcycle icon.