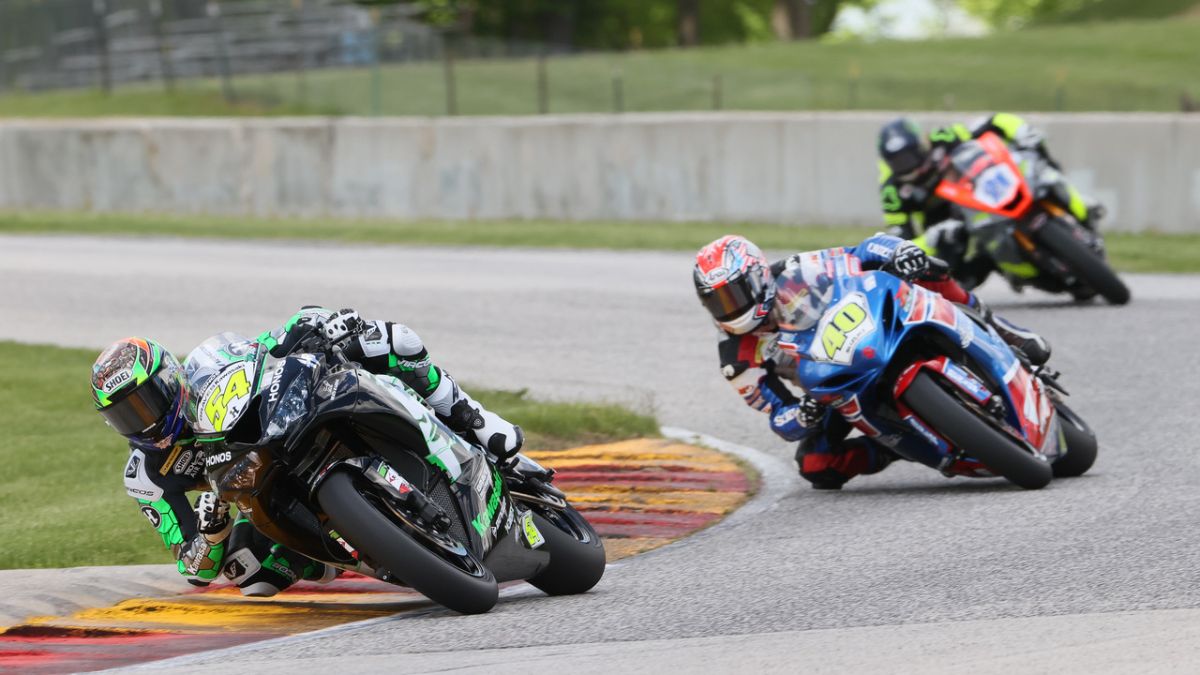 There were three new winners in the four support classes at Road America today with PJ Jacobsen, Dominic Doyle and Richie Escalante scoring victories in the Stock 1000, Liqui Moly Junior Cup and Supersport classes, respectively, in the opening round of the 2020 MotoAmerica Series.

Jacobsen, a veteran of World Supersport and World Superbike and the runner-up in last year’s Supersport Series, won his first Stock 1000 race on a sunny Saturday at Road America; South African Doyle won his first career Liqui Moly Junior Cup race by just .078 of a second over defending champion Rocco Landers; and Escalante dominated the Supersport race, finishing 11.5 seconds ahead of Brandon Paasch.

The Twins Cup race, meanwhile, was won by Kaleb DeKeyrel by just .002 of a second over Landers, with DeKeyrel taking his second career win in the class in what was just his second race in Twins Cup.

In Saturday’s Supersport race, HONOS team rider Richie Escalante notched his first career Supersport win with an impressive performance aboard his Graves Motorsports-built Kawasaki ZX-R. For Team Green, it was their first Supersport victory in an AMA-sanctioned road racing since Leandro Mercado’s win at Daytona in October 2009.

Second place went to Celtic HSBK Racing’s Brandon Paasch aboard a Yamaha, and Altus Motorsports rider Kevin Olmedo rounded out the podium in third on a Suzuki.

“I’m really happy,” Escalante said about his win. “The Graves Kawasaki is a very good bike. I’m really happy for me, the team, the bike, (the) new year. I’m working really hard this weekend. I’m riding a little bit on my limit. Today, I started really good. I pushed and I arrived in my rhythm. Tomorrow is another race. I need to keep working. Thanks to HONOS, the sponsor for the team. I’m ready for tomorrow.”

In MotoAmerica’s first race of the season, not to mention the first motorcycle road racing National anywhere in the world since COVID-19, the Series’ literbike riders competed in the lone Stock 1000 race of the weekend at Road America.

South African Cameron Petersen got a great jump off the line, got the holeshot, and maintained the race lead aboard his Altus Motorsports Tucker Hagerty Suzuki for the majority of the eight-lap event. Polesitter PJ Jacobsen stalked Petersen aboard his Celtic HSBK Racing Ducati, then made his move around Petersen, and managed to pull out a gap of more than four seconds at the stripe to take the win. Petersen finished second, and Ride HVMC Racing’s Corey Alexander brought his Kawasaki home in third.

“I haven’t really ridden this bike much; just at the Barber test where the weather was really bad,” Jacobsen said. “I’ve been off the bike for two months and haven’t ridden. Cam (Petersen) got into turn one pretty aggressive. I knew that he wanted to lead the race. I was like, ‘Let’s follow Cam and see what he can do.’ I hadn’t seen Corey (Alexander), so I didn’t know if he was hiding or what he was doing. Kind of sat there and figured out what he was doing and stuff. Then I kept looking back, and Corey was right there, too. So, I was just like, ‘What should I do?’ Then I saw the lap board. So, I was like, ‘I’m just going to try and go like qualifying lap times and put my head down.’ That’s what I did. The bike is really good. It has some good things like any bike and some difficult things. He (Petersen) could really get away from me, but in other places, we had an advantage. So, it’s pros and cons. It was really good. It’s good to ride with these guys. It was a fun race. I’m sure there’ll be some very exciting races throughout the season.”

With 2019 Liqui Moly Junior Cup Champion Rocco Landers returning to the class to defend his title, the expectation was that he would continue his winning ways unabated. However, polesitter Dominic Doyle had other plans. The BARTCON Racing rider rode a masterful race and, even though Landers got by him on a couple of occasions, Doyle fought back and had enough of the lead coming up the hill to the finish line that he managed to hold off Landers’ Kawasaki by .078 of a second to capture his first-ever MotoAmerica victory. Landers, also aboard a Kawasaki, was second, while Celtic HSBK Racing’s Sam Lochoff finished third, also on a Kawasaki.

When asked about his breakthrough win, Doyle said, “I figured that (Landers) would pull some strings and get out to the front there with me. He knows how to follow and get with me. He’s an intelligent rider. I know that he’ll be there with me. He just plans things for the last few laps. He came past me a couple times, twice. On the third-to-last lap, he came by me, through Canada (Corner), I think. I got him back going down the straightaway. I tried to just put my head down and stay out front. So that was that.”

Twins Cup: DeKeyrel By A Whisker

The closest race of the day was in Twins Cup, which was the final race on Saturday’s schedule. And, what a finish to the race day it was. Rocco Landers, who was competing in his second-consecutive race of the day, looked to have the measure of the field in the eight-lap event, but Kaleb DeKeyrel had other plans. DeKeyrel, riding a 1833CJKNOWS Yamaha, put a perfect draft pass on Landers, who was riding an American Racing/SportbikeTrackGear.com Suzuki, to take the win. The margin of victory for DeKeyrel was a scant .002 of a second over Landers. Meanwhile, Syndicate Racing/Apex Assassins Yamaha rider Jason Madama won an intense battle against Chris Parrish to finish third.

“Our team this year has assembled a really good group,” DeKeyrel said. “This is the first time that I’m actually going to be able to take on the entire championship. Last year, we were planning on doing Laguna and then on, but we just couldn’t get everything put together, all the puzzle pieces together in time. So, I’m excited that I finally get to compete in my first full championship this year. It should be fun. I enjoy every second of being out here racing with these guys. I had a long break racing MotoAmerica, and I’m definitely happy to be back.”