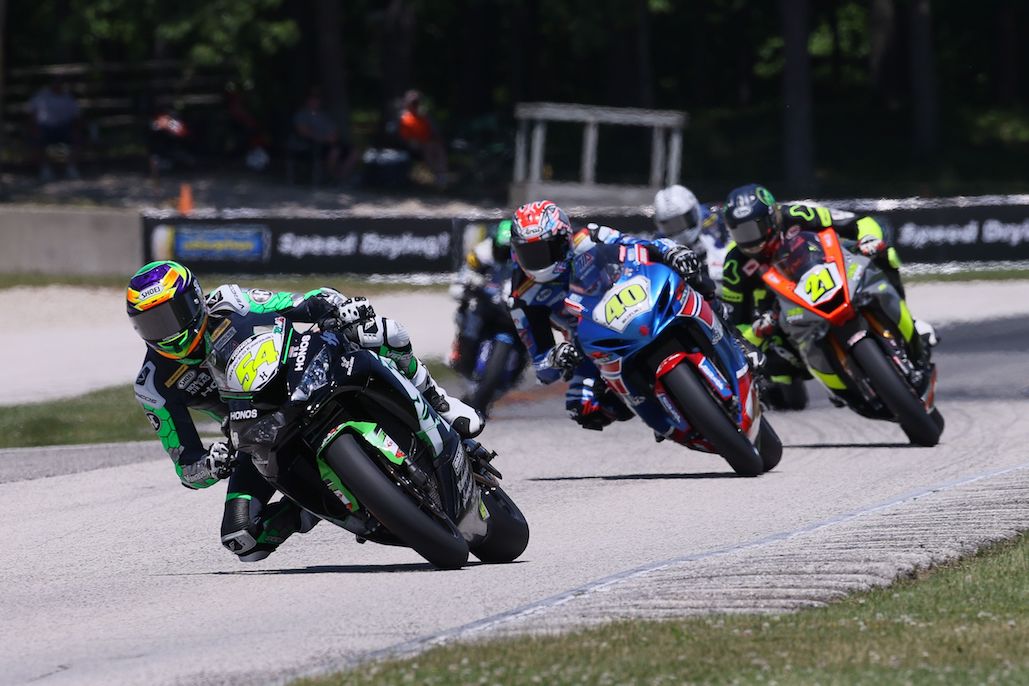 If nothing else, Sunday at MotoMotoA proved one thing: No one’s perfect. Well, okay, Richie Escalante still is.

HONOS Racing’s Escalante won his fourth MotoAmerica Supersport race in a row on a sunny Sunday in Wisconsin, but he was the only one of the undefeated riders going into day two at Road America that came out unscathed. Dominic Doyle, who was unbeaten until today, lost out in the Liqui Moly Junior Cup race to Rocco Landers; Landers stopped the Kaleb De Keyrel win streak in Twins Cup; and Cameron Petersen took advantage of PJ Jacobsen’s crash in the morning session that knocked him out of the race to win the Stock 1000 class.

Even four-time MotoAmerica Superbike Champion Cameron Beaubier failed to win for the first time in 2020 when he crashed out of the HONOS Superbike race.

HONOS Kawasaki rider Richie Escalante is having quite the start to his 2020 season. In Sunday’s Supersport race two, Escalante once again notched the win, which was his fourth consecutive victory. Early in the 11-lap race, M4 ECSTAR Suzuki’s Sean Dylan Kelly was giving Escalante all he could handle at the front of the pack, but Escalante maintained his focus and was able to pull away as the laps wound down. He took the checkers by a little less than six seconds over Kelly. Second place was very much in contention between Kelly and Celtic HSBK Racing’s Brandon Paasch. Kelly versus Paasch turned out to be the biggest skirmish of the race, and it was hotly contested, going right down to the final run up the hill to the finish line. At the stripe, Kelly prevailed over Paasch by a scant .044 of a second to take second place and Paasch filled out the podium.

“After finishing the two tests in the preseason and then it stopped for two months,” Escalante said. “I don’t have the feeling to this year win. Last race I am feeling very good in the bike. So, this track for this bike is good. Right now is the moment to change the track for the next race, so we’ll see. I’m really happy. The race is very fun. I take a long-time battle like this. So, it’s fun to pass on every corner. I’m really happy. The HONOS Racing Kawasaki is working really good and my team all weekend. I’m happy and ready for the next races.”

The final race of the weekend was Liqui Moly Junior Cup race two, and the two frontrunners from Saturday were the same on Sunday. BARTCON Racing Kawasaki’s Dominic Doyle, who was the victor in race one, had another showdown with Landers Racing Kawasaki’s Rocco Landers. Defending class champion Landers tried the same draft pass as yesterday in the run up the hill to the finish line, and he timed his move perfectly this time as he took the win over Doyle by .069 of a second. Third place went to Celtic HSBK Racing’s Sam Lochoff, the South African notching his second podium finish of the season.

“Going into Canada Corner I missed a shift,” Rocco explained. “I caught a false neutral in-between the gears. I ended up running wide. I think I put in a new lap record there, a 39:1. But I tried to get off to a good start and tried to pull away in the beginning, but that didn’t work. I looked back the second lap and he was there. I was like, ‘I’m just going to try to lead as much as I can and see if he’s not able to.’ Obviously, that didn’t work. Changed my strategy midway through the race and decided I was going to follow him like I normally do and see what they were doing. Then I knew it was a risk because it’s failed three times this year. So I was like, ‘I don’t even care. Just do it.’ Then I just decided to leave a little bit more room going into the last corner on the last lap and tried to pull into his draft and stay as long as possible and pull out as late as possible. Got by him up the hill and just tried to pinch him off a little bit. There’s no words. I’m stoked. I’m so happy to get the first win this season, finally.”

The lone Twins Cup race of the weekend went green on Sunday morning, and polesitter Rocco Landers, who is new to the two-banger class this season, got a good jump off the line aboard his Roadracing World Young Guns/Sportbiketrackgear.com Suzuki. Kaleb De Keyrel, winner of the first two Twins Cup races of the year at Road America 1, challenged for the lead a couple of times during the eight-lap event, but the 1-833-CJKNOWS Accident & Injury Law Yamaha rider ultimately settled for second place, just .799 of a second behind Landers. Brittenum Construction/Hayden Schultz Racing’s Hayden Schultz, who formerly raced in the MotoAmerica KTM RC Cup spec series, finished third to record his first podium in the Twins Cup class.

“The team worked so hard trying to get some more horsepower out of the bike for this round,” Landers said. “So, we came in, and we were top in every session so far. We just kept pushing, kept pushing, kept pushing. We got pole position. Then I was just trying to get as good of a start as possible and then try to lead in turn five on the first lap. So, the strategy worked out pretty all right. Then just kept pushing consistent, good laps and continued to pull away. The last lap, I saw ‘2.3,’ and I was like, ‘I’m probably all right, but I got to keep pushing.’”

In Sunday morning’s Stock 1000 morning warmup, current points leader PJ Jacobsen had a technical issue on his out-lap aboard the #99 Celtic HSBK Racing Ducati, which caused him to crash. He was unable to start the morning’s Stock 1000 race as a result, and Altus Motorsports Suzuki’s Cameron Petersen got the holeshot at the start.

In the early stages of the race, MESA37 Racing’s Stefano Mesa ran close with Petersen and tried to take the lead, but Petersen held on and stretched out his lead. At the checkers, Petersen took the win by over six seconds over Mesa. For Petersen, it was his first victory in the class and second-ever MotoAmerica win, which concluded a memorable week for the South African. On Thursday, Petersen also got engaged. Third place in the race went to Michael Gilbert Racing Kawasaki’s Michael Gilbert, who prevailed over Alex Dumas for the final spot on the podium.

Commenting on what could only be described as the “best week ever” for Petersen, he said with a smile, “If I knew this was going to change the game, I would have done it (gotten engaged) a long time ago. It’s been an unbelievable weekend. It started off with good vibes, obviously, with getting engaged. Then I knew coming into Road America having back-to-back weekends we were going to step it up pretty big this weekend. The race was interesting. I’m not going to lie. We’ve been having some pretty bad brake problems all weekend. Right before the race, pretty much five minutes before we went out there, the front wheel was off, and they were trying to make a plan. New brake pads, new everything. The brakes had a completely different feel just riding out on the sighting lap. Then on the warmup lap, going into turn seven I had nothing. I went to go grab the front brakes and there was nothing there. So, I was all over the rear brake. I did everything I could, and that scared me. The brakes came back to me kind of the rest of the lap. And I wanted this so bad. I was just like, ‘You know what? It’s life or death. I’m going to do everything I can.’ Thankfully the brakes held up. I didn’t have much brakes towards the end there. It was a little bit scary, but I’m doing this for myself and especially the team. They work so hard and they deserve these results. Perfect weekend. Just going to keep building on this. My thoughts are with PJ. He had an unlucky one this morning. Obviously, I want to be racing against him. Hopefully he gets better soon and he’s not too bad.”