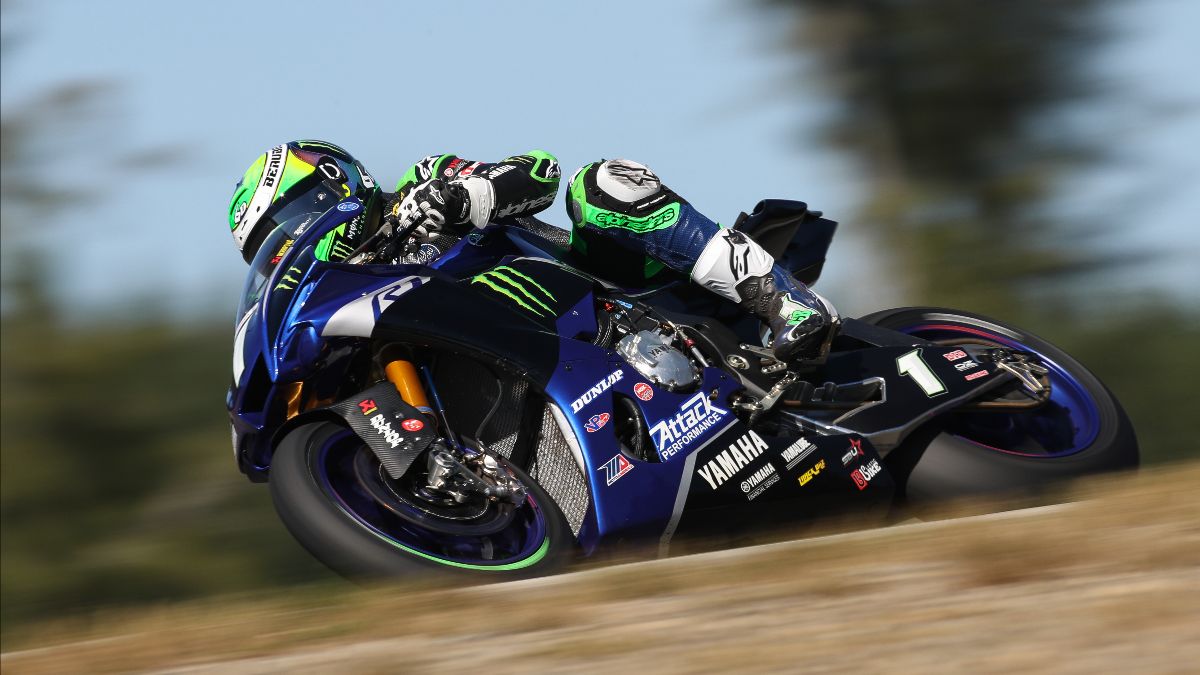 Led by four-time MotoAmerica Superbike Champion Cameron Beaubier, the series arrives in New Jersey for round six of the nine-round series with the first of back-to-back races with the teams packing up on Sunday night and heading to Barber Motorsports Park for round seven, September 18-20.

Beaubier and his Monster Energy Attack Performance Yamaha will face off against 22 others in the HONOS Superbike races in search of his fifth career win on the 2.25-mile, 14-turn racetrack. Among those entered and hoping to stop him from doing just that are the other two active racers who have won at NJMP on a Superbike – M4 ECSTAR Suzuki’s Toni Elias and Scheibe Racing BMW’s Josh Herrin.

Following his ninth win of the 10-race-old season two weeks ago at the Ridge in Washington State, Beaubier holds a commanding 54-point lead in the championship. Thus far in 2020, Beaubier has been unstoppable, leading virtually every practice and qualifying session, starting eight of the 10 races from pole position, and winning nine of the 10 races. Only his teammate Jake Gagne has bettered him in qualifying, the former MotoAmerica Superstock 1000 Champion earning pole position for round five at the Ridge.

The only person other than Beaubier to win a race in 2020 is M4 ECSTAR Suzuki’s Bobby Fong, the 2019 MotoAmerica Supersport Champion taking advantage of Beaubier’s only miscue of the year – a crash out of the lead in race two of Road America 2 – to take the first HONOS Superbike victory of his career.

The four men at the front in the majority of this year’s races are the four men at the top of the point standings. Beaubier leads Gagne by 54 points with the latter standing on the podium in eight of the 10 races.

Westby Racing’s Mathew Scholtz is third in the title chase, the South African finishing second to Beaubier in four races while earning podium finishes in two other races. Scholtz is 22 points behind Gagne and 76 points in arrears of Beaubier.

The aforementioned Fong is fourth and already 111 points behind Beaubier. His title aspirations were squashed by a race-one crash at Pittsburgh International Race Complex that ended up putting him out of race two as the pain in his left hand/wrist made racing impossible. Fong, however, remains the only man other than Beaubier to taste victory in 2020 and he comes to NJMP fresh off two podium finishes at the Ridge and a few weeks of healing time.

The fight for points in the bottom half of the top 10 is intense with Herrin currently holding down fifth on the Scheibe Racing BMW but by just nine points over KWR Ducati’s Kyle Wyman, the New Yorker coming off a miserable round at the Ridge where he failed to score a point, and Fong’s M4 ECSTAR Suzuki teammate Toni Elias.

Elias, a three-time winner at NJMP, is having a difficult season and has seen his podium-less streak grow to an unthinkable 11 races. Of late, however, Elias seems to be getting closer to the form that you’d expect of a 32-time MotoAmerica Superbike race winner.

Sixteen points behind Wyman/Elias is team owner/racer David Anthony, the FLY Racing ADR Motorsports-backed Australian sitting eighth in the standings. Two men are trying to close the gap to Anthony and those two are Altus Motorsports’ Cameron Petersen, the current points leader in the Stock 1000 class, and Anthony’s teammate, Bradley Ward. Petersen and Ward trail Anthony by 15 and 16 points, respectively, with Ward rounding out the top 10 in the series after five rounds (and 10 races).

The HONOS Superbikes will take to the NJMP racetrack for the first time on Friday morning at 11:20 for qualifying practice one. They will compete for pole position in the Superpole session at 11:15 a.m. on Saturday, followed by HONOS Superbike race one at 4:10 p.m. On Sunday, race two will take place at 3:10 p.m.

AMA Superbike racing has been held for the past 11 years in succession at New Jersey Motorsports Park with this year’s race marking the 13th AMA Superbike event at the facility in Millville. The discrepancy in those two numbers stems from the 2016 season when NJMP hosted two rounds of the MotoAmerica Series.

Garrett Gerloff, who is now racing in the World Superbike Championship, is the current Superbike lap record holder at NJMP. The Texan earned pole position last year with a record-setting 1:20.323.

Gerloff went on to win Superbike race one a year ago at NJMP, besting his Yamaha teammate Beaubier by 1.7 seconds. Beaubier bounced back the following day to beat JD Beach by 1.4 seconds for the victory. Gerloff, meanwhile, was declared unfit to race on Sunday after crashing during morning warm-up and suffering a concussion.

The fastest race lap of last year also went to Gerloff with the Texan lapping at 1:20.588 in race one. Beach had the fastest lap in race two – a 1:20.785 – en route to second place behind Beaubier.