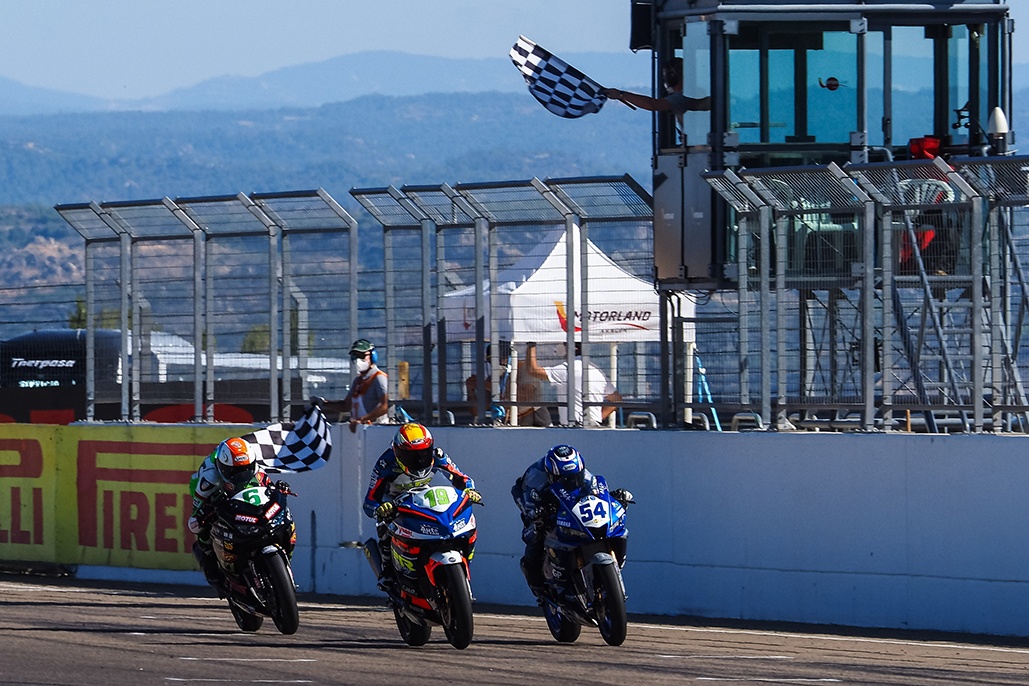 Victory for Victor Rodriguez Nunez has he made up 29 places to take a sensational victory as Jeffrey Buis extends his Championship lead.

Thrills and spills were the name of the game in FIM Supersport 300 World Championship as Victor Rodriguez Nunez (2R Racing) claimed a stunning victory at MotorLand Aragon despite coming through the Last Chance Race and starting from 30th place of the 36-strong grid, claiming victory by just 0.042s.

Nunez battled his way through the field and claimed the lead on numerous occasions but led at the most important time, claiming victory by just 0.042s ahead of Bahattin Sofuoglu (Biblion Motoxracing Yamaha WorldSSP300) in a thrilling battle involving a large number of riders; the top six separated by just one second, showing how competitive WorldSSP300 is. Jeffrey Buis (MTM Kawasaki MOTOPORT) extended his Championship lead with a podium finish, the Dutchman having to fight back after a mistake around the halfway stage of the race at the final two corners.

Meikon Kawakami (Tram Brasil AD 78) finished in 12th place ahead of the recovering Filip Salac (ACCR Czech Talent Team – Willi Race); the Czech rider forced to start at the back of the grid following a penalty but fighting his way to finish in 13th place and a points scoring debut for the Moto3™ regular.

Ton Kawakami (Yamaha MS Racing) was classified in 14th place ahead of Alvaro Diaz (Biblion Motoxracing Yamaha WSSP300); the Spanish rider rounding out the points-paying positions with a 15th place finish; holding off the challenge from Johan Gimbert (GP Project) to secure one point in the Championship standings.

Kevin Sabatucci (Kawasaki GP Project) was the first to retire from the race after an incident on Lap 1 put him out of contention, while Oliver König (MOVISIO by Freudenberg Jr Team) Tom Booth-Amos (RT Motorsports by SKM-Kawasaki), Glenn van Straalen (EAB Ten Kate Racing), Koen Meuffels (MTM Kawasaki MOTOPORT) and Kim Aloisi (ProGP Racing) all retired from the race.

Yuta Okaya (MTM Kawasaki MOTOPORT) and Nick Kalinin (Battley-RT Motorsports by SKM – Kawasaki) came together at Turn 1 on Lap 7 forcing both to retire while Hugo de Cancellis (Team TRAISMENO) had a crash at Turn 7 on the same lap; the Frenchman making slight contact with another rider before coming off his bike.

P1 Victor Rodriguez Nunez (2R Racing)
“It was a very difficult race because starting 30th is completely different to starting from the front rows. I tried to push a lot, all that I could, and tried to get to the front. When I got there, I tried to get positions lap-by-lap and stay at the front. We are really happy.”

P2 Bahattin Sofuoglu (Biblion Motoxracing Yamaha WSSP300)
“This morning, and all this weekend, was a very good start for us as we were always near the top five. In Superpole, we took pole position. In the race start, I had a little bit of pressure on my side and after the start of the race I did my best. There was a little gap but I am happy for second position.”

P3 Jeffrey Buis (MTM Kawasaki MOTOPORT)
“At the beginning of the race, I had a good start, but I made two big mistakes so came back into the group. I needed to fight through that group but at the end of the race I had good tactics and third position is good for the Championship.”