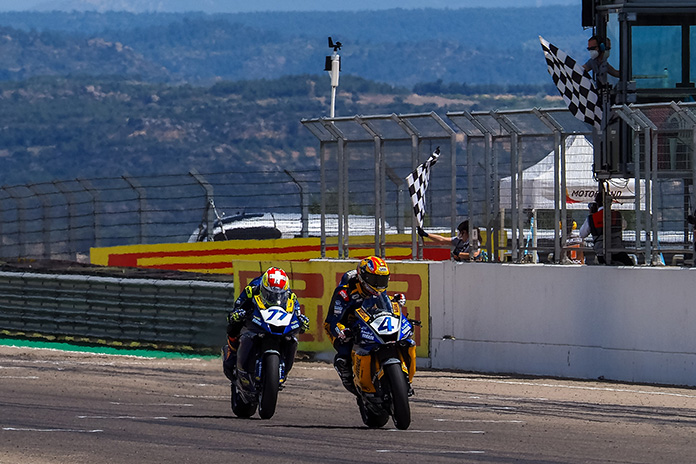 A dramatic opening race of the 2021 season ends with a first win for Odendaal and a first podium for Aegerter.

Odendaal suffered a highside crash at the Supported Test at the Circuit de Barcelona-Catalunya which resulted in a dislocated shoulder, with Odendaal responding to that in perfect fashion with victory at Aragon. Dominique Aegerter (Ten Kate Racing Yamaha) claimed a maiden podium on his WorldSSP debut with Philipp Oettl (Kawasaki Puccetti Racing) in third.

There was a contrast of starts from the front row as Cluzel was able to get a superb jump on the field from pole position, while Niki Tuuli (MV Agusta Corse Clienti) lost time and positions as he fell through the order. The Finnish rider was able to stem the flow before starting to fight his way back through the field.

After Tuuli had recovered from his poor start, he was able to pass race winner Odendaal, second-placed Aegerter and Philipp Oettl (Kawasaki Puccetti Racing) to start chasing down Cluzel, as they battled for the first victory of the season.

Tuuli had fought back from his poor start to close down Cluzel for the lead but the pair collided in the braking area of Turn 12 with both forced to retire from the race, allowing Philipp Oettl (Kawasaki Puccetti Racing), Dominique Aegerter (Ten Kate Racing Yamaha) and Steven Odendaal (Evan Bros. WorldSSP Yamaha Team) to engage in a three-way battle for the lead. Both Tuuli and Cluzel were taken to the medical centre for a check-up following the incident; Cluzel was declared fit while Tuuli was transported to hospital for further assessment after being declared unfit with a concussion. The incident was placed under investigation by the FIM WorldSBK Stewards.

Oettl and Aegerter swapped positions throughout Lap 12, with the German holding on to the lead, but allowed Odendaal to continue to close on the pair. As they approached the final corner, Aegerter was able to pass Oettl on the inside of the final corner, before Odendaal followed him through at Turn 1. Aegerter’s lead did not last long as Oettl passed him into Turn 1, but the Swiss rider moved back ahead at the double left-hander of Turns 4 and 5, with the pair switching positions throughout the last few laps; Aegerter faster in the first half of the lap with Oettl quicker in the second half leading to a thrilling battle for the win.

Luca Bernardi (CM Racing) secured San Marino’s best ever result in WorldSSP with a stunning fourth place finish on his WorldSSP debut, ahead of Manuel Gonzalez (Yamaha ParkinGo Team); the Spaniard picking up his best ever WorldSSP result. Federico Caricasulo (GMT94 Yamaha) finished in the top six on his return to WorldSSP following his year in WorldSBK in 2020.

Hannes Soomer (Kallio Racing) finished in seventh place with Christoffer Bergman (Wojick Racing Team) in eighth place on his return to WorldSSP; his 2020 season being interrupted by injuries sustained away from WorldSSP. Italian Raffaele de Rosa was ninth with Turkish rider Can Öncü (Kawasaki Puccetti Racing) completing the top ten.

Randy Krummenacher (EAB Racing Team) claimed 11th place on his return to WorldSSP, ahead of Maria Herrera (Biblion Iberica Yamaha Motoxracing) who was the highest-placed WorldSSP Challenge rider, fending off the challenge from Kevin Manfredi (Altogo Racing Team) in 13th.

Michel Fabrizio’s (G.A.P MOTOZOO Racing by Puccetti) scored points on his return to WorldSSP after 15 years away from the class, with Indonesian Galang Hendra Pratama (Ten Kate Racing Yamaha completing the points.

Stephane Frossard (Moto Team Jura Vitesse) was 16th place, just one second outside the points, with Pawel Szkopek (Yamaha MS Racing) in 17th place. Rookie Shogo Kawasaki (G.A.P. MOTOZOO Racing by Puccetti) was in 18th place and the last of the runners on the lead lap.

Leonardo Taccini (Orelac Racing VerdNatura) came off at the chicane in the early stages, forcing the young Italian to finish the race four laps down. An action packed run through the chicane meant Marc Alcoba (Yamaha MS Racing) came off his bike although he was able to re-join; the Spaniard coming into the race on the back foot following a six-place grid penalty for an underweight bike in the Tissot Superpole session. Davide Pizolli (VFT Racing) was another retirement following a crash in the early stages of the race, alongside Austrian Thomas Gradinger (DK Motorsport).

“I’ve been working towards this moment for a long time. The team were excellent the whole weekend. We experienced some difficult conditions during this race because of the temperature.”

“I’m very happy to be on the podium for the first time in Aragon in the WorldSSP class with the Ten Kate Racing Yamaha. They did a great job and it’s nice to already have one race on Saturday so tomorrow we can try to improve a little bit and I hope we can fight for the top position. To start the season like this is very good and I hope you enjoyed the race!”

“It was a really tough race; this afternoon was a lot hotter than I expected. It was a good race at the beginning. One time I lost a gear in Turn 15, so I lost some ground to Cluzel and in the end the tyre was completely finished. With the hotter condition, the Kawasaki seems to suffer a little bit. I think today, we did the best out of the situation and I’m happy to be on the podium again after half a year.”

Championship Standings (after Race 1, Round 1)