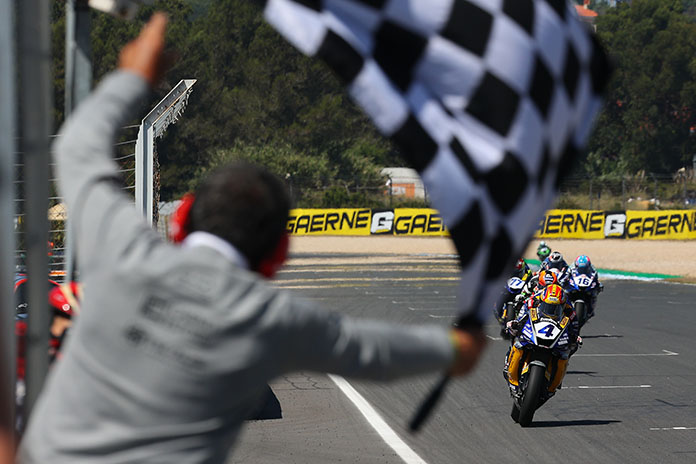 The FIM Supersport World Championship’s racing started at the Gaerne Estoril Round in thrilling fashion as five riders battled it out for victory with just 1.023s covering the top five riders at the Circuito Estoril as Steven Odendaal (Evan Bros. WorldSSP Yamaha Team) secured his third win of 2021 after a stunning battle at the front of the field.

South African rider Odendaal got the jump on polesitter Federico Caricasulo (GMT94 Yamaha) at the start and immediately looked to build a gap ahead of the Italian who claimed his first pole position since returning to WorldSSP. Caricasulo was unable to hold on to second place as the race moved onto Lap 2 as Philipp Oettl (Kawasaki Puccetti Racing) jumped the Italian at Turn 1 and started to close in on Odendaal.

Caricasulo was the first rider to have an incident when under pressure from teammate Jules Cluzel (GMT94 Yamaha) with the Italian losing the front of his Yamaha machine at Turn 4; promoting Cluzel into third place while Caricasulo tumbled down the order although he was able to rejoin the race.

Dominique Aegerter (Ten Kate Racing Yamaha) and Manuel Gonzalez (Yamaha ParkinGo Team) also joined the lead battle with less than a second separating the top five on Lap 10 of the 18-lap race. As the race headed on to Lap 14, Cluzel and Aegerter battled it out for third place with Swiss rider Aegerter making the move at Turn 1 on Cluzel before the Frenchman responded on the same lap at Turn 4.

Oettl had kept the lead until Lap 16 when Odendaal made his move, taking advantage of extra pace heading into Turn 6 as the South African rider took the lead before Oettl responded at Turns 1 and 2 on Lap 17 to re-gain the lead of the race, but as the race entered the last lap, Odendaal and Aegerter made their move at Turn 1 although Cluzel moved back on Aegerter; the pair going on a drag race until the line with Cluzel claiming third by just 0.015s, behind Odendaal and Oettl. Gonzalez equalled his best result in WorldSSP with fifth place as he held on to the lead group throughout the race.

Italian Raffaele De Rosa (Orelac Racing VerdNatura) responded from a bad start to move into sixth place but was unable to take advantage of the battling ahead of him to latch onto the lead group, while Luca Bernardi (CM Racing) secured another top ten finish with seventh place. Estonian Hannes Soomer (Kallio Racing) claimed eighth place with 2019 Champion Randy Krummenacher (EAB Racing Team) in ninth place.

Christoffer Bergman (Wojcik Racing Team), who had shown strong pace in the early stages of the Estoril Round, finished in tenth place with Niki Tuuli (MV Agusta Corse Clienti) in 11th despite starting the race in the pit lane following the crash with Cluzel at the Aragon Round. Caricasulo responded from his crash to claim 12th place, ahead of Marc Alcoba (Yamaha MS Racing), Stephane Frossard (Moto Team Jura Vitesse) and Davide Pizzoli (VFT Racing) completing the points; the latter being penalized by one position for track limits infringements while defending from Frossard. Swiss rider Frossard was the highest place WorldSSP Challenge competitor.

“I couldn’t have imaged to start this way especially with injury. I’m carrying with the shoulder but honestly I’m so happy with this victory because it was really difficult, and I had to really think a lot to win this race. I was really battling in the changes of direction. I’m so happy, thanks so much to the team because they did a fantastic job and also, once again, thanks to everyone supporting me”

“I’m happy with 20 points, it’s a good result for us as a team and the team did an amazing job yesterday and especially today. In Superpole, we had a really quick pace and I tried to control the race from the front because, to be honest, it’s a little bit easier and nicer. It was a good race, I tried to block Steven but… I’ll try tomorrow!”.

“I was looking for a little bit better, but third today was the best I could do. Actually, the last lap was really hard, with Aegerter. He passed me on the first turn, but he missed the apex, I tried go back but then I lose a little bit of time. Then I came back, I passed him, he passed me again, and then I just waited until the last turn and the last straight to pass him. It’s a good race for me. Hopefully we will make some improvements for tomorrow and the target is to get at least a podium and, if possible, a little bit better.”

Championship Standings (after Race 1, Round 2) 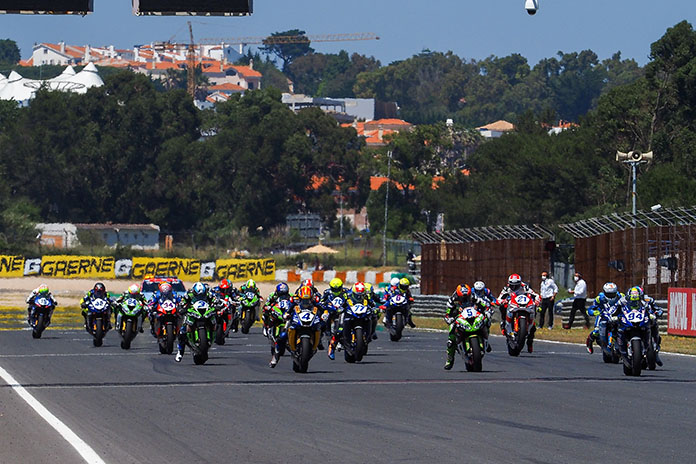