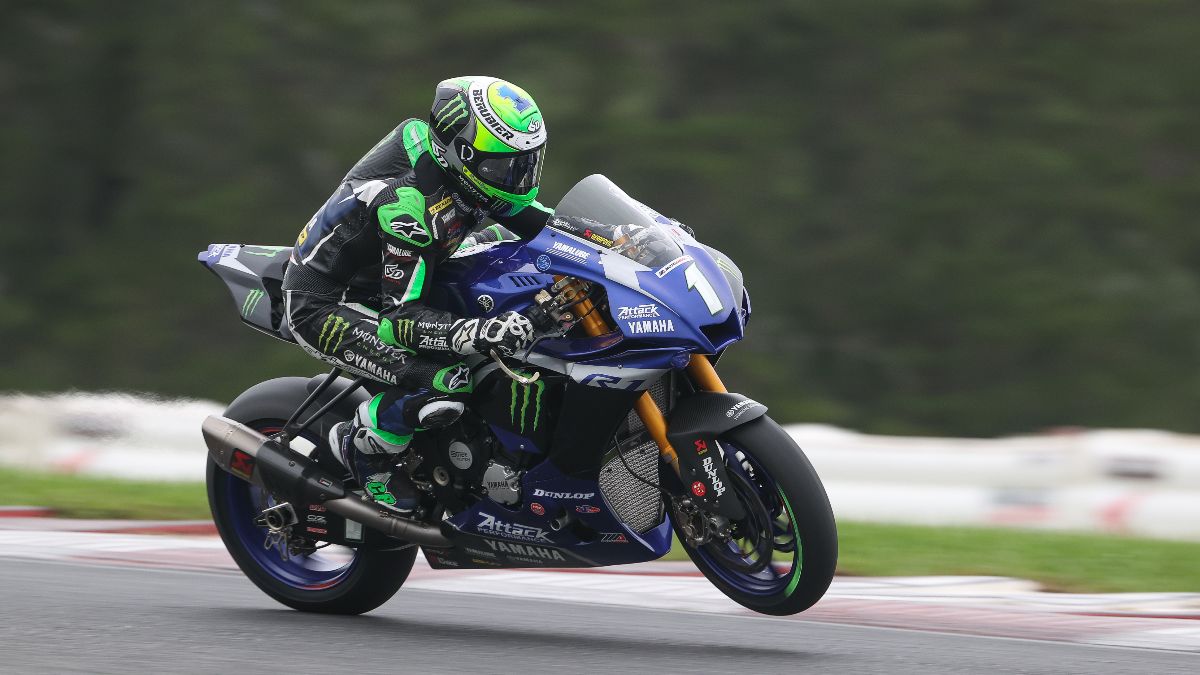 The Goal Is A Common One: Beat The Four-Time Champion.

Five days removed from round six of the 2020 MotoAmerica Series at New Jersey Motorsports Park, the men of the HONOS Superbike class will take to the track at Barber Motorsports Park for practice on Friday morning with the same goal as the previous six rounds: Put a stop to the runaway train that is Cameron Beaubier.

Plain and simple, Beaubier is on a tear. Dating back to last year, 14 of the last 15 HONOS Superbike races and eight in a row in 2020. His points lead is a massive 84 points and he hasn’t shown any signs of slowing down. In fact, there are times when he looks as though he can crank it up a notch if the need presents itself.

Beaubier’s 84-point lead is over his Monster Energy Attack Performance teammate Jake Gagne, who with six second-place finishes is the closest anyone has come to beating the four-time MotoAmerica Superbike Champion. Gagne, meanwhile, has his hands full with Westby Racing’s Mathew Scholtz, the South African just six points behind with three rounds to go. Their battle at NJMP on Sunday was enthralling with Gagne just drafting past Scholtz at the finish line to get second by .014 of a second. Those two have definitely proven to be the best of the rest based on their consistent podium finishes.

However, the only other rider to have won a HONOS Superbike race in 2020 is neither of the aforementioned Gagne or Scholtz. It’s Bobby Fong.

Fong and his M4 ECSTAR Suzuki won the fourth race of the season at Road America when Beaubier crashed, but the Stockton, California, racer has been battling an injured wrist since crashing out of race one at PittRace. Fong, however, has been on the podium since with two third-place finishes at the Ridge, but he was off the pace at NJMP with fifth and fourth place finishes.

Fong is 47 points behind Scholtz and 22 points ahead of his teammate Toni Elias, the Spaniard coming off his best weekend of the season at NJMP where he ended an 11-race streak of not finishing on the podium with a third-place finish on Saturday.

KWR Ducati’s Kyle Wyman was fourth and sixth in the two races in New Jersey and he now trails Elias by just four points. The New Yorker is eight points clear of Scheibe Racing BMW’s Josh Herrin, with Herrin having a tough weekend at NJMP that netted him just six points.

Travis Wyman Racing’s Travis Wyman is 10th in the series standings, moving three points clear of the injured Bradley Ward on Sunday in New Jersey. Ward, who suffered a broken femur, in the crash at NJMP will likely drop down the standings as he will miss the Barber round at the very least while he recovers.

Since 2017, Barber Motorsports Park has played host to the MotoAmerica season finale. That won’t be the case this year as COVID-19 forced schedule changes that pushed both the Indianapolis Motor Speedway and WeatherTech Raceway Laguna Seca rounds to the end of the season. Barber is now the seventh round with Indy and Laguna scheduled for rounds eight and nine, respectively.

Cameron Beaubier won both Superbike races in the Barber season finale last year after battles with his then-teammate Garrett Gerloff. The two wins earned him an improbable fourth Superbike title by just five points over Toni Elias, the Spaniard suffering through third and fourth place finishes when really anything higher would have likely earned him a second MotoAmerica Superbike title. Elias arrived at Barber last year with a 16-point lead over Beaubier.

In addition to winning both races last year, Beaubier also sat on pole with his 1:23.802 lap during Superpole. The best race lap from a year ago was Beaubier’s 1:23.807 in race one while chasing down Gerloff. The Superbike lap record is also owned by Beaubier with his 1:23.514 coming in Superpole in 2018 at Barber.

Watching history: Beaubier’s next MotoAmerica Superbike victory will be the 50th of his AMA Superbike career. Forty-six of those wins have come during the MotoAmerica era with Beaubier winning three AMA Superbike races prior to MotoAmerica taking over the series in 2015.

After the first six rounds of the 2019 MotoAmerica Superbike Series, Beaubier had a total of 207 points. After six rounds and 12 races in 2020, Beaubier has 68 more points with 275. With his 11 wins thus far, the four-time series champion has already won three more races than in any of his other Superbike seasons.

Australian Mat Mladin has won more Superbike races at Barber Motorsports Park than any other racer with nine victories from 2004 to 2009. Josh Hayes is second on the Barber win list with seven Superbike wins – all in a row from 2012 to 2015. Of the active MotoAmerica Superbike racers, Cameron Beaubier and Toni Elias are tied with three wins apiece at Barber. The very first Superbike races held at Barber were in 2003 with Aaron Yates winning race one and Kurtis Roberts taking victory in race two.

Suzuki (21 wins) and Yamaha (11 wins) have won every AMA Superbike race held at Barber Motorsports Park with the exception of two – Robert’s and Miguel Duhamel’s victory on Hondas in 2003 and 2004.