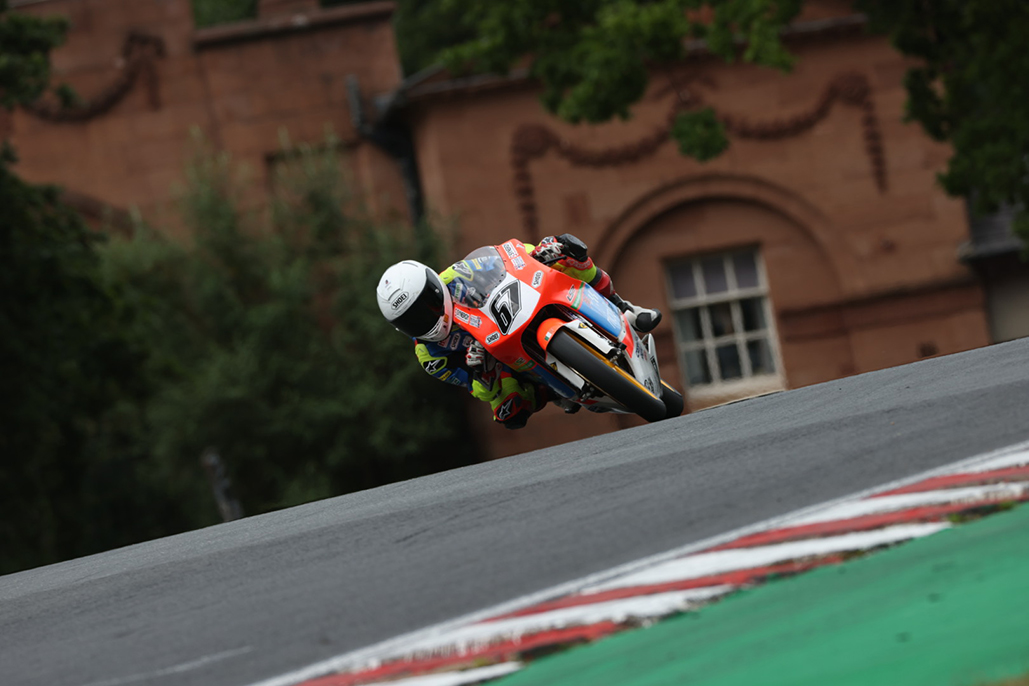 The number 67 holds on as Race 2 at Oulton Park gets Red Flagged early, with Belford completing the podium.

Casey O’Gorman (Microlise Cresswell Racing) has done it again! In Race 2 at Oulton Park the number 67 shot off from the field after an early duel, enjoying a sizeable gap until a charge from Carter Brown (City Lifting/RS Racing) set the scene for a final lap scrap. But that was cut short early as the Red Flag came out, with O’Gorman taking the win and Brown forced to settle for second. Evan Belford (City Lifting/RS Racing) took third after more solid speed at Oulton Park.

O’Gorman took the holeshot, with Belford the early man on the move as the number 52 slotted into second. Brown was shuffled down to third early doors, with Jonny Garness (City Lifting/RS Racing) fourth ahead of Ollie Walker (Moto Rapido / SP125 Racing) on the chase.

On Lap 2 Belford made a move for the lead and held it, with Brown the man to lose out as he headed deep at the chicane and pushed to tag back onto the back of the duo. But O’Gorman was a man on a mission and the number 67 hit back not long after to slice through into the lead as the trio kept gaining ground on the rest by Lap 3.

Next time around, O’Gorman really had the hammer down. The Race 1 winner was pulling away from what was fast becoming a duel for second, and Belford was the man under pressure. The number 52 briefly lost second not long after but managed to hit back, before half what would turn out to be race distance beckoned and the number 74 could decisively take over on the chase behind O’Gorman.

Drama then hit for Ollie Walker just behind, with the Moto Rapido / SP125 Racing rider suffering an issue and forced onto the sidelines. That left Garness in a safer fourth place with some clear air ahead of the battle for fifth, but the leading trio were long gone.

At the front though, Brown was on a charge. What had been over 2 seconds was fast approaching half that as the number 74 pushed on, reeling in O’Gorman with some record-breaking pace. From Lap 6 on, Brown’s arrival to make it a duel at the front seemed inevitable, but not long after that the Red Flag came out after a crash for Ryan Hitchcock (Wilson Racing).

Stopped on Lap 10 of 14, the race couldn’t run its course but his early pacesetting performance was enough for O’Gorman to secure the double and a full 50-point haul from Round 1. Brown will be disappointed to have not had the chance to fight it out for the win but goes one better that Saturday in second, with Belford once again taking a podium finish but this time in P3.

Garness takes fourth once again on Sunday, but he did have a fair gap back to the battle to complete the top five. That was won by Cormac Buchanan (Microlise Cresswell Racing) as the New Zealander bounced back from a disastrous debut to seriously impress. He got the better of Harrison Crosby (Banks Racing), with Jamie Lyons (C&M Motors Ltd/Tooltec Racing) just behind in seventh.

Sullivan Mounsey (iForce Lloyd & Jones) found some Sunday redemption as he’s classified eighth for some first points of the season after a crash out of Race 1, with Troy Jeffrey (Stiggymotorsport) and Bailey-Stuart Campbell (Team 151s) completing the top ten. The next rider classified was James Cook (Wilson Racing) as he stormed through after finding himself P28 on the grid. With a few more laps could be have made even more progress?

We’ll likely find out next time out as the Honda British Talent Cup returns at Knockhill next weekend. O’Gorman holds the cards on the way in, but will they shuffle? There are just a few days to wait to find out!