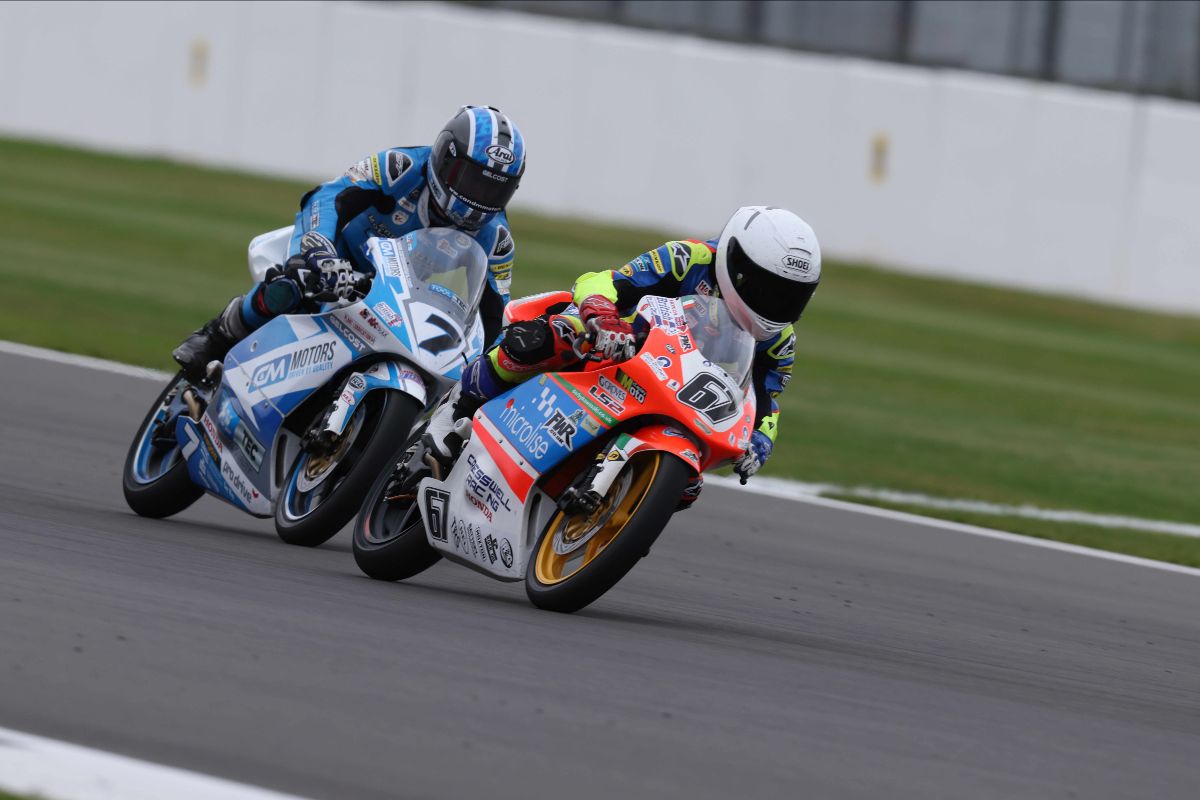 Two familiar names pulled clear once again, with Belford bouncing back to complete the podium.

Casey O’Gorman (Microlise Cresswell Racing) and Jamie Lyons (C&M Motors Ltd / Tooltec Racing) were once again the class of the field on Sunday at Silverstone, able to break away a little later in the race for another stunning duel in the Honda British Talent Cup. This time O’Gorman came out on top after another last-lap decider, with Evan Belford (City Lifting by RS Racing) completing the podium in third – and extending his points lead.

This time around it was a big group fight initially, with a freight train forming around Silverstone as O’Gorman, Lyons, Garness, Belford and Carter Brown (City Lifting by RS Racing) led the charge. But lap by lap a gap opened up for O’Gorman and Lyons, and bad luck hit for Garness as the number 57 was shuffled back slightly and then suffered a problem, dropping him like a stone out of contention as his laptimes shot up.

That left O’Gorman and Lyon with a slightly easier task of breaking away, and that they did as the battle for the podium raged behind. O’Gorman looked to be searching for whether a move a la Alex Rins would work through Woodcote as he trialled that, and evidence seemed to prove it would. But in the end, the number 67 struck earlier and got the hammer down, leaving Lyons as the rider forced on the attack.

The Northern Irish rider stayed close but couldn’t quite make it happen, nevertheless taking an impressive second place to round out a revelatory weekend at Silverstone. O’Gorman continued his march back towards the top with another win, although with Belford battling his way to third it was solid damage limitation as the number 52 took his first podium for a wee while.

Harrison Crosby (Banks Racing) bounced back from Race 1 disappointment to take fourth and mix it up at the front, with Carter Brown completing the top five. There was more bad luck for James Cook (Wilson Racing) as, after getting collected by Crosby in Race 1, the number 34 this time fell victim to a moment for Brown as the number 74 wobbled and took him down. Ollie Walker (Moto Rapido / SP125 Racing) also suffered late heartbreak as he crashed out so close to home, and after fighting for the podium.

Sullivan Mounsey (iForce Lloyd & Jones) made his way back to sixth after a tougher start, a little off the podium fight, with Corey Tinker (CT Racing) impressing once again in P7. Rhys Stephenson (Rocket Racing) was almost alongside Tinker at the line and took another P8 to complete a good weekend at the British GP.

That’s a wrap on a huge weekend at the British GP. After a second and a win, O’Gorman moves into second overall, now 23 points down on Belford. But the number 67 is equal on points with Carter Brown, with Garness dropping to P4 overall after coming home in 14th. Now it’s next stop Snetterton, and it’s a fast turnaround as the BTC gets back on track next weekend!