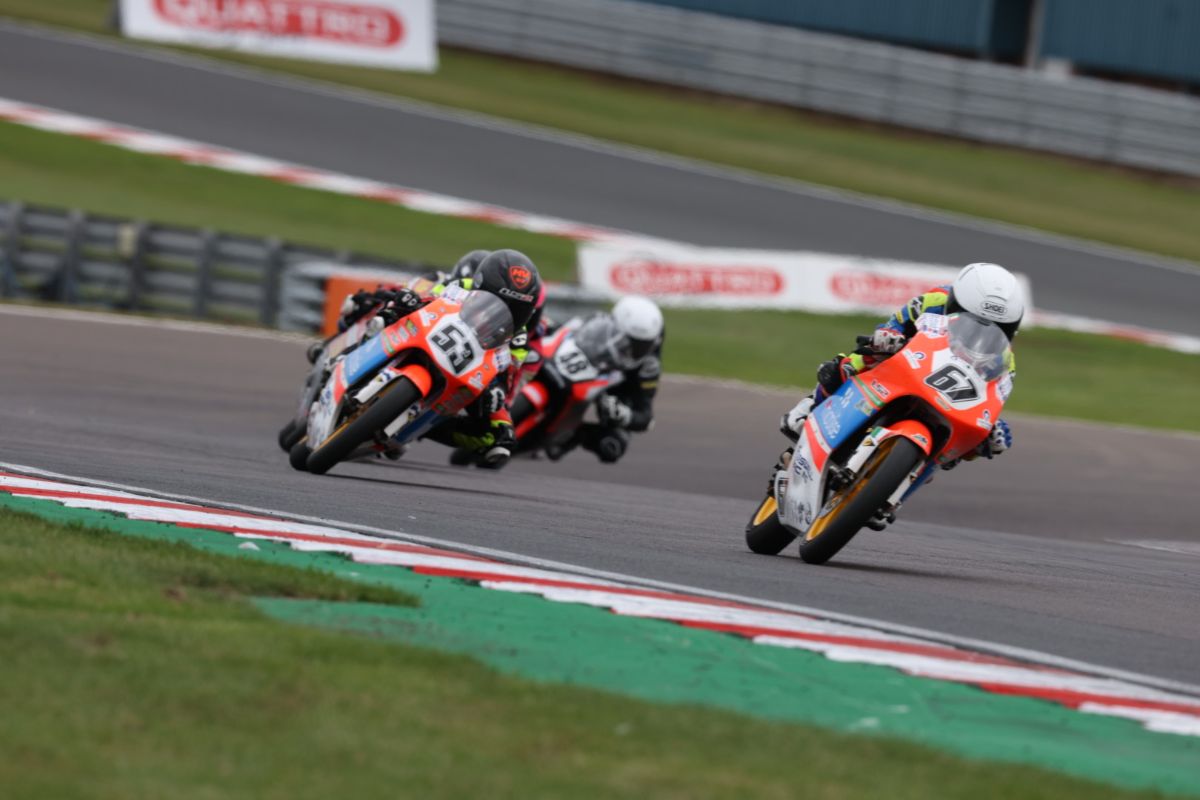 The number 67 does it again, with Veijer taking a debut podium and Garness making up more ground.

Casey O’Gorman (Microlise Cresswell Racing) is definitely back to his best, the number 67 impressing once again in Race 3 at Donington to take a second win in three on his return from injury. It was rookie teammate Kiyano Veijer he denied to do it, but the Dutchman nevertheless impressed to convert his Saturday form into a debut rostrum. Johnny Garness (City Liftin by RS Racing) took third, making up more ground in the standings as he gets to within 13 of the top.

Garness took the holeshot as the number 57 does so often, with teammate and points leader Evan Belford initially into second ahead of James Cook (Wilson Racing). But this race would remain a freight train and a ten-rider battle broke out from the off, with nothing to separate them. Veijer and O’Gorman weren’t right in the fight for the lead initially, but the two Microlise Cresswell Racing riders chipped away.

At half distance Garness threatened to pull away but the group reeled him back in, and the squabble continued once again. Veijer took his first turn at leading too, the number 53 hitting the front and holding it over the line to start Lap 19, with both he and O’Gorman gaining momentum.

Not long after, the train became split. With backmarkers to negotiate, a gap opened up just behind the top five, and it was Cook fighting to reel them back in. On Lap 21 though the race came undone for the number 34 as he got crossed up and then headed into the gravel, unable to keep it upright and out of the race.

Up ahead, O’Gorman was back in command and remained so onto the final lap. More blue flags were there to contend with but the number 67 was able to just stay out of the clutches of his teammate, crossing the line for his fourth win of the season in style. Veijer was close, but took second and his first podium after a weekend of impressive steps forward.

Forward was also the word for Garness as he completed the podium and made some key gains in the standings once again. It’s now just 13 points he trails teammate Belford, with plenty to play for as we’re just over the halfway point of 2021.

Bailey Stuart-Campbell (151s Racing) just lost out on the podium but took a good fourth, with good points and from pole, the final rider of the fantastic four who crossed the line first.

Ollie Walker (Moto Rapido / SP125 Racing) headed the second gaggle as they couldn’t quite close the gap left by Cook, with Jamie Lyons (C&M Motors Ltd / Tooltec Racing) a few more tenths back in P6. Sullivan Mounsey (iForce Lloyd & Jones) got back to fighting it out near the front again in Race 3 and was P7 at the flag, ahead of Carter Brown and City Lifting by RS Racing teammate Evan Belford – aka the rider at the top of the standings. It was a tougher weekend for Belford and he’ll be looking to hit back next time out, as will Brown.

That’s a wrap on Donington Park, at least for the first visit. An intriguing weekend sees O’Gorman back with a bang and Belford lose some ground… so what will we see at Silverstone? Next time out, it’s the British GP and the biggest stage of the season. Come back for more in two weeks!