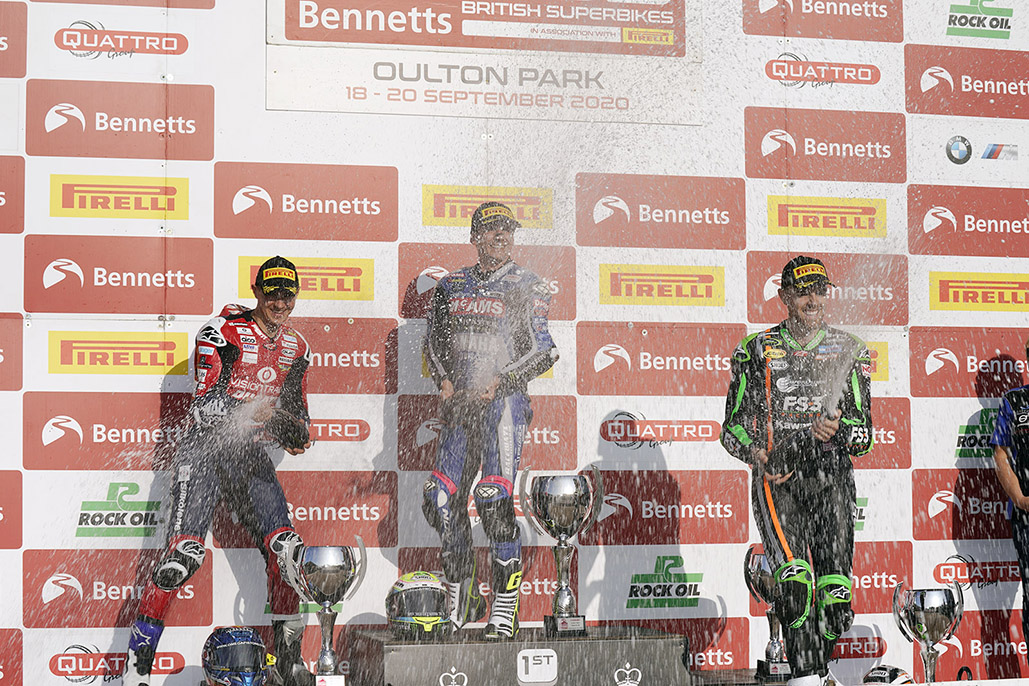 Jason O’Halloran became the eighth wonder of the 2020 Bennetts British Superbike Championship season, winning the opening race at Oulton Park by the narrowest of margins following an intense tenth round of the series in Cheshire.

O’Halloran had been on the pace throughout free practice, claiming pole position for today’s race for the McAMS Yamaha team, but it was a hard-fought victory for the Australian as he faced some serious competition in his quest to return to the top step for the first time since 2016.

At the start of the race, Glenn Irwin had hit the front of the pack ahead of brother Andrew and O’Halloran, as disaster struck Silverstone race-winner Kyle Ryde as he crashed out unhurt on the opening lap.

O’Halloran had taken the lead on the second lap, but in a frantic battle for the win, just four laps later Christian Iddon had taken the advantage at the front, after carving his way up the order.

As the VisionTrack Ducati rider led the freight train of riders, Andrew Irwin was also eager to fight his way though and he had moved into second place.

By the tenth lap O’Halloran had dropped back to fourth, as Iddon started coming under fire from the Honda Racing pairing with Andrew and Glenn holding second and third place.

O’Halloran wasn’t defeated though and he moved ahead of the championship leader and then into second place with three laps remaining as he began his fightback to the front.

Iddon was defending hard but it wasn’t enough on the final lap as O’Halloran was able to grab the advantage and hold off the Snetterton race winner, to claim victory by 0.358s for McAMS Yamaha.

The race also proved to be a highlight for the Rapid Fulfillment FS-3 Kawasaki team as Danny Buchan claimed his first podium finish of the season; moving into third place with two laps to go as he pushed the Honda Racing pairing for the final spot in the top three.

The third place for Buchan means that five different manufacturers have now finished on the podium this season as he became the ninth different rider to celebrate a podium result.

Andrew Irwin held off brother Glenn for fourth place at the chequered flag, as his lead in the championship standings was reduced by five points as O’Halloran leapt up to second in the standings ahead of tomorrow’s two races.

Lee Jackson was sixth after getting ahead of Bradley Ray and Josh Brookes in the closing stages of Round 10 with Tarran Mackenzie and Gino Rea completing the top ten.

Jason O’Halloran
(McAMS Yamaha)
Round 10 race winner
“I got a pretty good start and I got into the lead in the early to the middle part of the race, and thought ‘I might try and have a bit of a break’.

“I saw +0.4 on the board early on and then I didn’t get the opportunity to go again, and in the early part of the races Andrew and Glenn (Irwin) were quite strong, but we were strong in different places of the track. I am sure when they were behind me they struggled and when I was behind them they struggled!

“I had to bide my time and figure out a couple of places where I was stronger and where I could make some passes. I need to get past Christian (Iddon) with a couple to go as I didn’t want to leave it right until the last minute, so when I got in front, I put my head down, set the fastest lap of the race on the last lap and managed to get the win.

“It has been a long time between wins. We have had four race in the row now where I have been on the podium. We were so close at Silverstone and even back at Donington we had the speed to win, we just didn’t manage to get there.