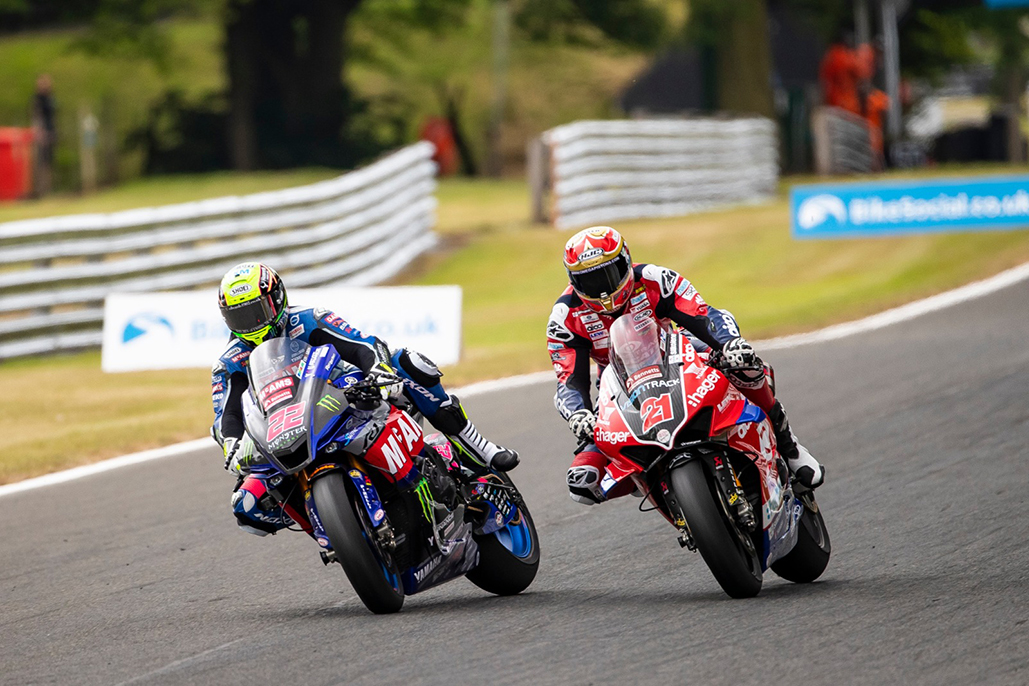 Jason O’Halloran delivered an imperious performance in the opening Bennetts British Superbike Championship round at Oulton Park today (Sunday), snatching the lead with a last lap attack on Christian Iddon in both of the day’s races.

O’Halloran had been victorious in yesterday’s curtain raiser and he carried his momentum into today’s action for the McAMS Yamaha team. O’Halloran hounded Iddon throughout the second race of the weekend, but despite several earlier attempts at a pass, he couldn’t get ahead.

The Australian was determined to return to winning ways at Oulton Park though and he pulled off an exuberant last corner move on Iddon into Lodge on the brakes to secure the win.

Peter Hickman meanwhile, had been battling in the early stages with the leading pair, before arm pump struck later in the race. The FHO Racing BMW rider showed determination to hold onto third place and claim the team’s maiden podium finish on its debut weekend – also the first for the new BMW M 1000 RR.

SYNETIQ BMW’s Danny Buchan was able to move his way up the order into fourth place, just ahead of Bradley Ray and Tarran Mackenzie, who had overcome a collision with Tommy Bridewell to regain ground before the chequered flag.

The rivalry between O’Halloran and Iddon continued in the final race of the triple-header as the pair went head-to-head for the final time in Cheshire. Iddon once again got a lightning start off the line to lead O’Halloran on the opening lap with Hickman again tucked into third after his pole position start.

O’Halloran was shadowing Iddon throughout the race and on more than one occasion looked to try to find a way ahead, but the VisionTrack Ducati rider kept holding him at bay.

The victory would once again come down to a final lap decider as O’Halloran made a brave overtake on the run down Lakeside to lead into Shell Oils corner.

Iddon tried to retaliate but had to settle for second, his third of the weekend to lead the charge for VisionTrack Ducati.

Bridewell meanwhile, had been desperate to make amends for his DNF in the previous race when the incident forced him to retire. He carved his way through from 12th position at the start and was soon piling the pressure on the riders ahead of him.

By lap 11, Bridewell was into fifth before he made a move on Hickman, who was beginning to suffer again from arm pump. He then targeted Mackenzie, hunting the McAMS Yamaha rider down before making a decisive pass on the brakes on lap 16.

Bridewell held off Mackenzie to the chequered flag to take the final podium position of the weekend with Hickman completing the top five.

It was a difficult weekend for defending champion Josh Brookes, the Australian ending today’s two races in seventh and sixth place respectively.

Jason O’Halloran – McAMS Yamaha
Triple race winner – Oulton Park
“It has been a great weekend and it couldn’t have gone any better, so I need to thank everyone at McAMS Yamaha.

“Race two was a comfortable race and Christian was setting a good pace and I was looking for somewhere to get ahead but it wasn’t working out.

“I got out of the seat and then got a good run out of Druids and was as close as ever so I just thought ‘let’s try’. I don’t know how I did get it stopped, but I did and then I just had enough to the line so I was happy with that.”

“In the third race, I had been lining Christian up for a move at Shell, but when I tried there a couple of times I didn’t think I could make a clean pass as he was strong there. He gapped me in some other places and I was a bit worried as I knew it wasn’t just the two of us at the front.

“I left it until the last lap again and I got a great run out of Cascades and hung on to his draft a little bit and went for the move and got through.

“I thought he might have come back at me, but to start the season with three wins was a perfect weekend for me.”
For more info checkout our dedicated British Superbikes News page