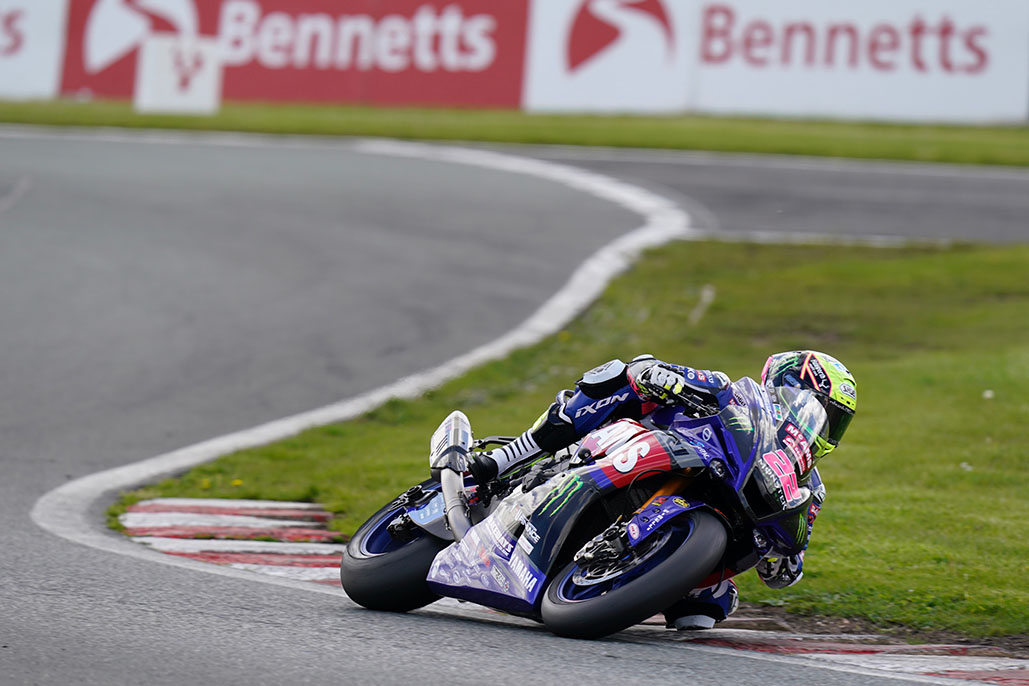 Jason O’Halloran set the pace in the final Bennetts British Superbike Championship Official Test session of the day at Oulton Park, putting the McAMS Yamaha rider just a narrow 0.037s ahead of Tommy Bridewell in a final five-minute fight to end the test in Cheshire fastest.

The opening two sessions had been topped by reigning champion Josh Brookes and RAF Regular and Reserve Kawasaki rider Ryan Vickers, but the final 55-minute session of the day saw the times inevitably tumble in perfect conditions at the parkland circuit.

As fans returned to watch trackside for the first time since 2019, 577 days since the season finale at Brands Hatch, they were treated to a thrilling end to the day as several riders headed out for a time attack to end the test.

Brookes had held the advantage with 15 minutes to go, but O’Halloran had soon surged back ahead of his fellow compatriot as the Australian pair locked out the leading two positions. However, with six minutes remaining of the day Vickers had posted a time, which moved him back to the top, nudging McAMS Yamaha’s O’Halloran back into second place.

Peter Hickman was then on a sequence of flying laps and he moved into second position and just 0.196s adrift of Vickers’ leading time, however with three minutes remaining O’Halloran set a time which put him back into P1 as the final minutes ticked down.

Oxford Products Racing Ducati’s Bridewell went into second position with just over a minute remaining of the day with Vickers moving back into third place, pushing Hickman into fourth at the chequered flag.

Brookes completed the top five for VisionTrack Ducati on his return to testing action after he missed the previous test at Snetterton following his crash at the Silverstone test. The defending champion moved back ahead of Gino Rea who led the Buildbase Suzuki charge in sixth.

Kyle Ryde ended the session in eighth place after a crash at Island ended his day prematurely despite a strong showing from the Rich Energy OMG Racing BMW rider, who was second fastest in the opening two sessions.

Bradley Ray made his debut in 2021 on the second of the Rich Energy OMG Racing BMWs in ninth place on the combined times, just 0.005s ahead of SYNETIQ BMW rival Danny Buchan, who completed the top ten.

Jason O’Halloran, McAMS Yamaha
“What a day to have been at Oulton Park; the fans were back, the sun was shining and it doesn’t get much better than that! It has been fantastic to see the support today and we have had three good sessions. It has been a really positive day and to end up on top is always a nice feeling.

“We have got through plenty and I was quite surprised with how fast we were at the end of the day, as in each session we pretty much had a different bike where we had so many changes. We keep moving forward so we just need to keep working to evolve what we are doing in the final tests, ready for when we get back racing next month.

“We have gained a lot of information today and our race tyre pace was really good. We stayed on a SC0 tyre at the end of the day and it felt good. I feel like we are in a strong place for when we come back here for the first race of the season now.”

WorldSBK arrives at Portimao for another rollercoaster weekend

WorldSSP300 set for Portimao showdown with the title on the line

Uprated Spec For New Amped A10