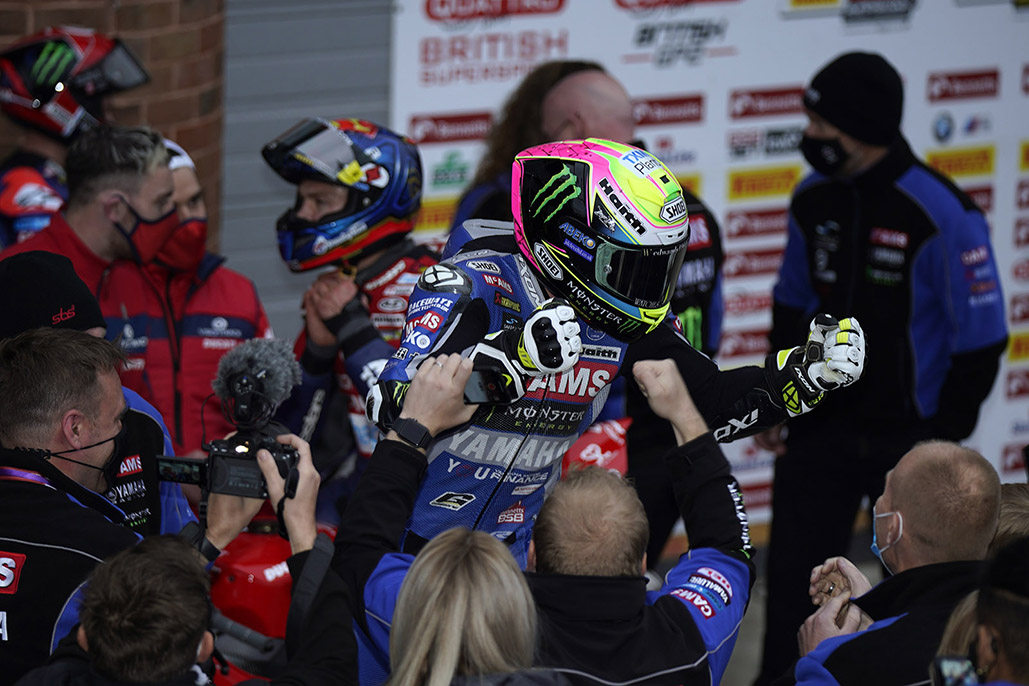 An incredible opening Bennetts British Superbike Championship race produced the most dramatic action of the 2020 season so far; with all five of the title contenders going all-in to battle for the victory, and it was Jason O’Halloran and McAMS Yamaha who aced the opening round of the weekend.

The lead changed every lap throughout the 16-lap tussle for supremacy in the standings and at the start of the race, Josh Brookes had lead the pack into Paddock Hill Bend for the first time, getting the jump on Glenn Irwin, O’Halloran and Christian Iddon.

Iddon was soon into third, but at the front, Glenn Irwin had captured the lead. The Honda Racing rider though was instantly under fire again from Brookes who regained the position before they crossed the line to start the next lap.

On lap five, Irwin went for another attempt; passing Brookes for the lead, with the VisionTrack Ducati rider nudged into third as Iddon moved ahead into second place.

Two laps later and Iddon became the third different rider to lead the race, but by lap eight, the Honda Racing Fireblade was back in front. Glenn Irwin was then holding the advantage from O’Halloran, Brookes and Iddon, and then the McAMS Yamaha rider was pushing for the lead.

O’Halloran made a decisive move to grab the position at Surtees, becoming the fourth of the five title contenders to lead the race. However, before lap 11 was completed, Iddon had fired the VisionTrack Ducati back ahead of O’Halloran with Glenn Irwin holding third place.

Iddon led the pack until the penultimate lap when he came under attack from a determined O’Halloran, who then made a break on the final two laps to claim his third victory of the season.

Iddon held second to the finish line despite the best efforts of Tarran Mackenzie, who carved his way through his rivals to end the race in third place ahead of Brookes, who had his advantage cut to seven points.

Danny Buchan and Rapid Fulfillment FS-3 Kawasaki completed the top five as he made ground over the final laps, with Glenn Irwin ended the race in sixth place, with his brother Andrew in close contention. Lee Jackson, Tommy Bridewell and Gino Rea completing the top ten.

Jason O’Halloran (McAMS Yamaha)
Bennetts BSB – Round 16 race winner
“That race was mental! It felt like it was the last race in the championship – everyone was just going for it! It think there are five of us who can challenge for the title and we all knew that today’s race was one of the most important of the weekend.

“We knew if Josh won today it would make it more difficult tomorrow and so we were all desperate to get to the front. I felt good but every time I made a pass, I got passed back!

“Towards the end of the race I managed to make a move on Christian, and then I made it stick and I thought that’s enough, put your head down and try and make a break. It felt so good to win that one.”