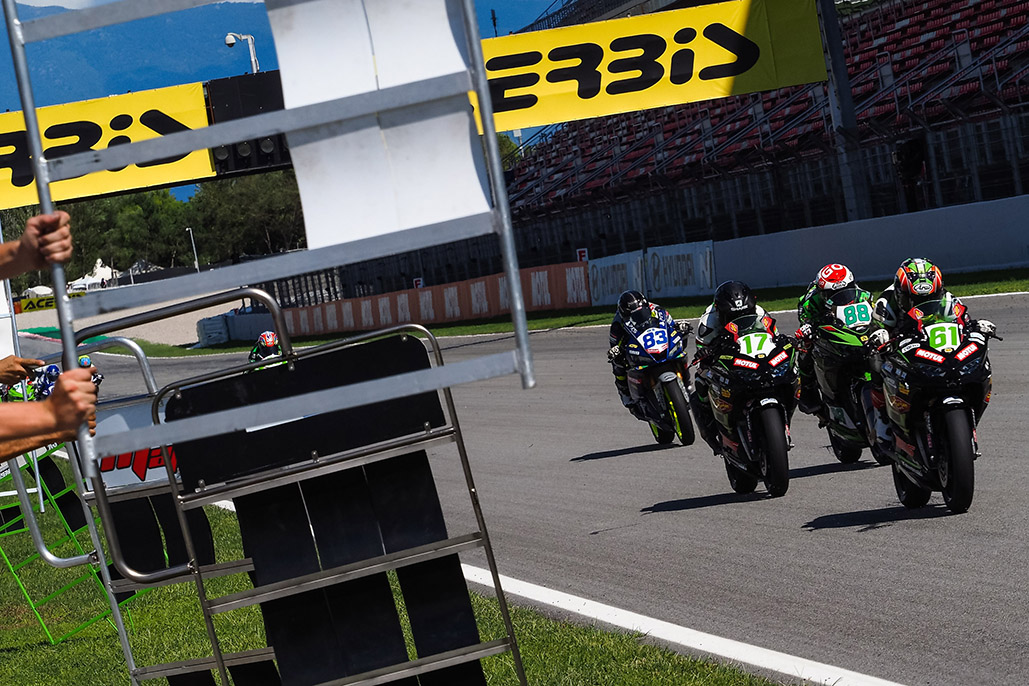 Last-lap collision between three front runners allows Okaya to claim his first WorldSSP300 as Deroue comes from the tenth row to the podium.

The drama went to the final corner on the last lap in FIM Supersport 300 World Championship as the Championship visited the Circuit de Barcelona-Catalunya for the first time with Yuta Okaya (MTM Kawasaki MOTOPORT) claiming his and Japan’s first victory in WorldSSP300 during the Acerbis Catalunya Round.

Okaya had been running at the front throughout on the 10-lap race and made the race-winning move on the last lap to claim the stunning victory, heading off teammates Scott Deroue and Jeffrey Buis as MTM Kawasaki MOTOPORT claimed a podium lockout during Race 2; with Deroue closing in on Buis in the Championship standings. Deroue had to come through the Last Chance Race to make the main races and battled his way through the grid to get to the podium in Race 2 as he showed strong pace throughout.

Koen Meuffels (MTM Kawasaki MOTOPORT) continued the team’s success as he finished in fourth place, the team claiming a 1-2-3-4 finish. Meikon Kawakami (Team Brasil AD 78) finished the race in fifth place as the highest-placed Yamaha rider, finishing just over a tenth away from a podium finish. Inigo Iglesias Bravo (Scuderia Maranga Racing) secured a top six finished; under a tenth away from Kawakami.

Hugo de Cancellis (Team TRASIMENO) was another who fought his way through the Last Chance Race to secure a seventh place finish, just ahead of Ukrainian rider Nick Kalinin (Battley-RT Motorsports by SKM-Kawasaki) in eighth, Adrian Huertas (ProGP Racing) in ninth and Sofuoglu finishing in tenth despite the last-lap crash.

P1 Yuta Okaya (MTM Kawasaki MOTOPORT)
“I have no words. It was such an exciting race but so difficult! It was the hottest conditions of the week and my bike is difficult to push on, we find the chance on the last lap so I could overtake Scott in the final corner. Happy for my first victory for me and also the first Japanese victory and thanks to the team.”

P2 Scott Deroue (MTM Kawasaki MOTOPORT)
“It’s unbelievable! This weekend has been so difficult. In first practice, we had a problem and we were not qualified for Superpole and the other practices were wet, so we were in the Last Chance Race. Yesterday, was really difficult in the wet. This morning was very good, I was fastest, so I knew I had the pace. Then you have to come from the back of the grid to the front and that can be very difficult. In the end, it was difficult, but it worked. I’m really happy.

P3 Jeffrey Buis (MTM Kawasaki MOTOPORT)
“It was a difficult race because in the middle of the race, my front tyre was completely destroyed and setting the lap times was hard. At the end of the race, I had some luck and I can come through to finish third. Good points for the Championship.”