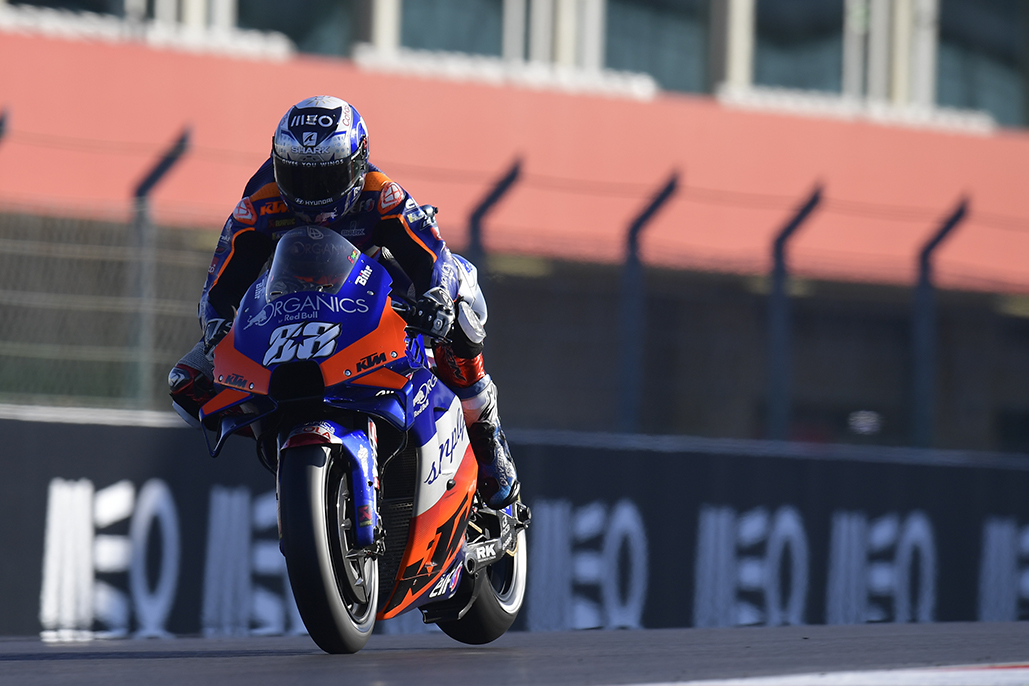 The Red Bull KTM Tech 3 rider storms Portimão in some serious style to head the grid for his home Grande Premio MEO de Portugal, joined by Morbidelli and Miller on the front row

In Q1, it was close but in the end Cal Crutchlow (LCR Honda Castrol) came out on top as he started his final MotoGP™ qualifying on top form, just a few hundredths ahead of Morbidelli. Morbidelli had a tense end to the session, however, pulling into pitlane with a minute still on the clock and left to wait and see if Brad Binder (Red Bull KTM Factory Racing) could knock him out. The South African was setting red sectors until the final sector, where the lap just went away and he ended up third; 13th on the grid as he aims to secure Rookie of the Year.

Behind the fight for the top, newly-crowned MotoGP™ World Champion Joan Mir (Team Suzuki Ecstar) equalled his worst ever premier class qualifying after a very difficult Saturday at the office. Not able to pull anything out the hat in Q1, he starts P20 and third to last on the grid.

Next up, Q2 was ready to go and the stage was set. The majestic Algarve International Circuit was the perfect host for the last qualifying dance of 2020, but who would come out on top? Zarco was the first man into the 1:39s, but there would be plenty more where that came from. Fabio Quartararo (Petronas Yamaha SRT) and Maverick Viñales (Monster Energy Yamaha MotoGP) exchanged P1 in quick succession before Morbidelli shot to the top with a 1:39.245, sitting provisional pole position after the first runs.

With six minutes to go, most of the riders left pitlane for their final time attack of the season. Quartararo was up in Sector 1, so was Crutchlow and so was Zarco. Morbidelli was under his own time in Sector 2 as well. Coming over the line, Quartararo moved himself up to P5 from P9 and Morbidelli improved his time once more.

Stefan Bradl (Repsol Honda Team) then shot into an amazing second, but it didn’t last too long as Crutchlow then demoted his fellow HRC rider to third and Quartararo moved onto the front row. Morbidelli and Miller, however, were flying. The first 1:38 was slammed in from the Italian, but could Miller snatch it away? Not quite, although the Aussie took over in second.

Then though, all eyes turned to the local hero. Oliveira was one of the last men who could deny Morbidelli and giving it his all on home soil, more than in touch. Rising over the brow of the hill, the number 88 got it done and crossed the line to set a new all-time lap record, a phenomenal 1:38.892. The celebrations couldn’t be too vigorous just yet though, with fellow KTM rider Pol Espargaro still out on a charge. The number 44 was faster in Sector 1 and 2 but by the end of the lap, the time faded away for the Spaniard and that was all she wrote: the dream was realised for Oliveira, Tech3 and Portugal. His maiden MotoGP™ pole, Portugal’s first MotoGP™ pole and Tech3’s first pole of the year.

Morbidelli’s qualifying was outstanding, however, the Italian turning Q1 into just 0.044 seconds off pole. Miller takes third and his fifth front row of the season, with his great mate Crutchlow next up. P4 is the British rider’s best qualifying result since his Aragon front row, can he fight for a dream goodbye podium from there?

Another man hoping to end the season on a high will be Quartararo from P5 on the grid, which also hands the Frenchman the BMW Qualifying Award for 2020. In addition, his fifth ensures the top five in qualifying are all Independent Team machines. In terms of the Independent Team rider standings, meanwhile, it’s Morbidelli vs Quartararo with the Italian ahead by 17 points…

In sixth place, it’s hats off to test rider turned increasingly impressive stand-in Stefan Bradl. The German HRC rider has been quick all weekend and was less than two tenths away from the front row, set to start the season finale as the top factory rider to boot. He beats Zarco by 0.034 seconds as the Frenchman took seventh despite a crash, with Viñales set to line-up in P8. Both he and ninth place Pol Espargaro finish just three tenths away from pole, but lock out the third row – showing once again how close the margins are in MotoGP™.

Alex Rins (Team Suzuki Ecstar) is going in search of P2 in the overall standings and the Constructor title for Suzuki, but he’s got a bit of work to do from P10. However, we’ve seen Rins reach the podium from further back in recent times, so never say never! The top Ducati – with the Borgo Panigale factory equal on points with Suzuki in the constructors’ standings – is Miller on the front row, however.

Takaaki Nakagami (LCR Honda Idemtisu) had a big FP4 crash and will line-up 11th on tomorrow’s grid, the first time he’s been off the front row in a few weeks, with Andrea Dovizioso (Ducati Team) finishing Q2 in P12 – 0.695 away from pole position and suffering a lap cancelled.

What a way for MotoGP™ qualifying to end in 2020. After seeing their man grab a first win in Styria, Portuguese fans now have a premier class pole position to celebrate thanks to the superb efforts of Oliveira. The job isn’t done yet though, can the Portuguese superstar end the season in fairytale fashion with a race win?

The final premier class battle of 2020 kicks off at 14:00 local time (GMT). The Constructor title is up for grabs, second in the riders’ Championship is up for grabs and the final bragging rights of 2020 are very much up for grabs as well. Don’t miss a single lap of action as MotoGP™ go racing in Portimão for the first time!

Miguel Oliveira: “I’m feeling really good and enjoying every moment on track, happy with every lap. Tomorrow we want to finish the job! That’s for sure, that’s the goal. We need to keep our feet on the ground and do a good job. I think for everyone it will be unknown territory because we had a lot of tyres to test and to work on the setup of the bike at the same time, so you know… we just hope we’ve done a good job and can finish the season well!”