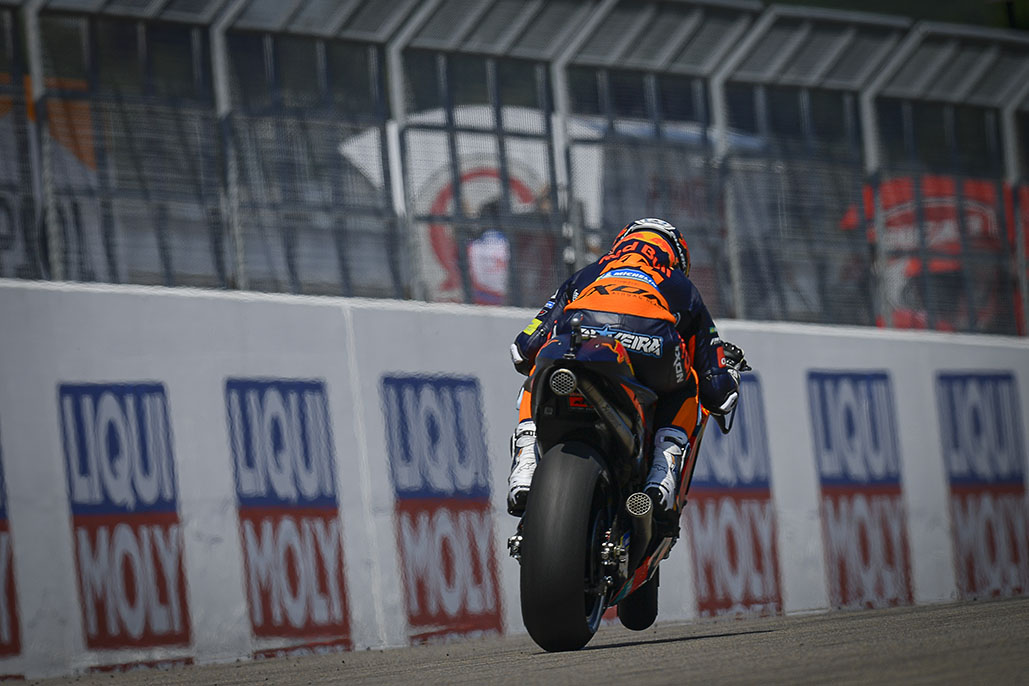 The Catalan GP winner remains the man to beat in Germany as he finishes Friday first to deny Yamaha.

New week, same speed: Miguel Oliveira (Red Bull KTM Factory Racing) remains the fastest man in MotoGP™ only a few days after his Catalan GP win, with the Portuguese rider topping the timesheets on Day 1 of the Liqui Moly Motorrad Grand Prix Deutschland. Around half a second off the outright lap record, Oliveira escaped Fabio Quartararo (Monster Energy Yamaha MotoGP) by a couple of tenths to take to the top, with Maverick Viñales making it two Monster Energy Yamaha MotoGP machines in the top three on Friday as he ended FP2 within a tenth of his teammate.

FP1
The day started with a very familiar name at the top of the Sachsenring timesheets: Marc Marquez (Repsol Honda Team). The Spaniard is undefeated at the venue in the premier class plus a few years before that, and he was quick out the blocks before also stringing together a longer run of laps. Second was Quartararo, who also took a fast tumble – rider ok – at Turn 12 before moving back to within 0.168 off Marquez. Takaaki Nakagami (LCR Honda Idemitsu) started the event a tenth further back in third, ahead of another Honda: Pol Espargaro (Repsol Honda Team). The number 44 also crashed at Turn 2, rider ok. Aleix Espargaro (Aprilia Racing Team Gresini) completed the top five, less than half a tenth in further arrears.

The other crasher in FP1 was the first: Jorge Martin (Pramac Racing). The Spaniard went down at Turn 12, rider ok.

FP2
In the afternoon, everyone improved and Miguel Oliveira took over at the top. The Catalan GP winner went more than 1.6 seconds quicker than his morning best, and just under a second quicker than Marc Marquez’ FP1 fastest lap, to head the timesheets in the session. He had two tenths in hand over Quartararo, who was second once again, with Viñales moving up from tenth in FP1 to complete the top three.

Alex Rins (Team Suzuki Ecstar) stole some headlines in fourth, the Spaniard impressing despite his wrist injury sustained ahead of Barcelona, ending the day top Suzuki and just under four tenths off the top. Pol Espargaro, Nakagami and Aleix Espargaro also impressed again, taking fifth, sixth and seventh, respectively. Marc Marquez, meanwhile, was shuffled down to outside the top ten.

Luca Marini (Sky VR46 Avintia) crashed first at Turn 13 and then at Turn 7, rider ok, and Pol Espargaro had his second crash of the day at Turn 4. Valentino Rossi (Petronas Yamaha SRT) also slid out; the ‘Doctor’ at Turn 1.

Danilo Petrucci (Tech3 KTM Factory Racing), who now has the updates seen on the Red Bull KTM Factory Racing machines of Oliveira and teammate Brad Binder, took P11 by the end of play and is the first man set to miss out on Q2 as it stands, with Marc Marquez ultimately ending the day in 12th by just 0.009. The eight-time World Champion said he’d expected to find himself in slightly better shape at the track but also didn’t push for a time attack.

Alex Marquez (LCR Honda Castrol) was even closer to the rider ahead – Marc Marquez – by the end of the day. Just 0.002 split the two as the younger Marquez slots into P13. With the track not featuring on the 2020 calendar, the day was the first taste of the Sachsenring in MotoGP™ for more than just the 2021 rookies. Alex Marquez was the fastest of those who haven’t raced the track before in the premier class.

Jorge Martin (Pramac Racing) was a tenth further back in P14, with Brad Binder completing the fastest fifteen on Friday ahead of reigning Champion Joan Mir.

Rossi ended Friday in P21, with a compatriot for company just behind him: Francesco Bagnaia (Ducati Lenovo Team). The number 63 was last on the timesheets and, although he didn’t push for a fast lap on soft tyres, will be looking for a lot more on Saturday morning as FP3 gets underway – as will the likes of Marc Marquez and Joan Mir.