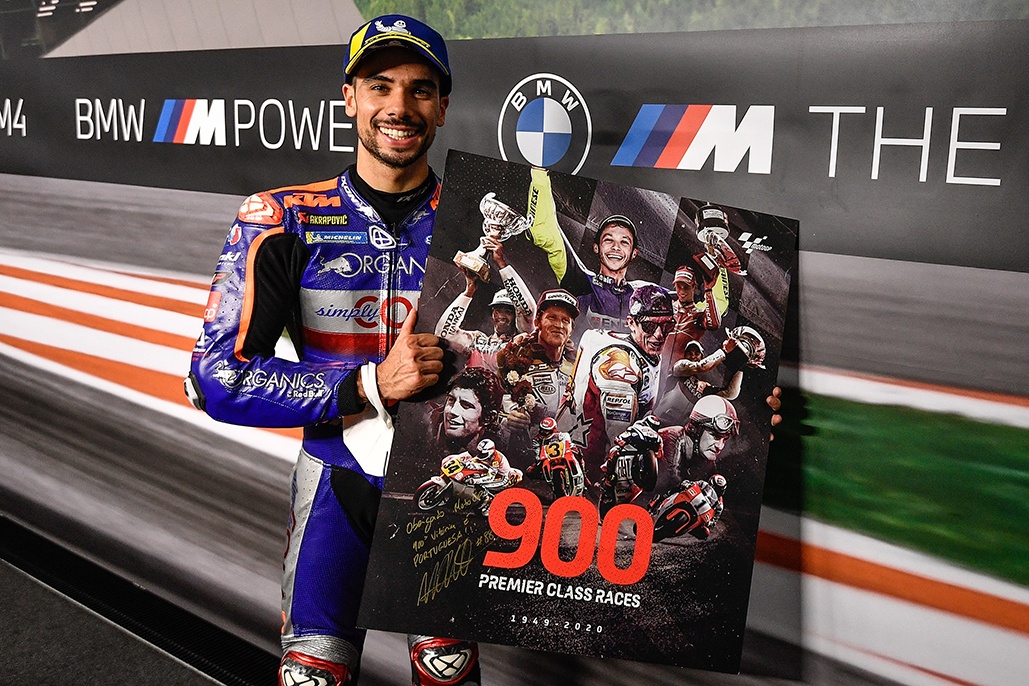 A thriller to the last, the final corner sees the Portuguese rider make history – and win for KTM on home turf.

The BMW M Grand Prix of Styria was already a guaranteed history maker as it hosted the 900th premier class race, but what a race it was. Another Red Flag and shortened sprint to the line gave us a dash of early drama, but more milestones were achieved once again in 2020 as Red Bull KTM Tech 3’s Miguel Oliveira took his first ever premier class victory in serious style. It’s the first premier class win for the Tech 3 squad, the first for Portugal, and the first KTM win on home turf for the factory and for Red Bull. It all went down to the final corner too as the Portuguese rider sliced past the duelling Jack Miller (Pramac Racing) and Pol Espargaro (Red Bull KTM Factory Racing) and kept it inch perfect to beat both to the line.

On the first start, Joan Mir (Team Suzuki Ecstar) took the holeshot from the front row – kind of – but the Suzuki headed wide and was then told to give the place back up. Espargaro was second before a scrappy few corners that saw the Spaniard demoted, before Miller took over at the front from Mir – position change complied with, voluntarily or not – and the number 36 slotted back in ahead of Takaaki Nakagami (LCR Honda Idemitsu). The two would duel as Miller tried to bolt, but it was Mir who would manage that as he made his way back into the lead and then set the fastest lap.

Miller and Nakagami just about stayed with him though, as Pol Espargaro and Alex Rins (Team Suzuki Ecstar) dueled it out for fourth in a little clear air. Behind them, Dovizioso had his hands full with Maverick Viñales (Monster Energy Yamaha MotoGP), too. Soon enough though, Dovi pulled away – and a KTM armada of Brad Binder (Red Bull KTM Factory Racing), Oliveira and his teammate Lecuona all slammed past the Yamaha in quick succession, leaving Viñales tenth.

The Spaniard appeared to have an issue and put his arm up once, but then disaster would strike not long after he’d managed to tuck back in and carry on. At Turn 1, the number 12 was forced to do a high speed bail out and he jumped off his machine just in time, the stricken Yamaha then hurtling towards the air fence and catching fire. That caused the Red Flag to come out to do repairs, but Viñales was immediately on his feet – rider ok and seemingly pretty mad about the incident.

Mir, Miller and Nakagami’s advantage was gone in a sudden puff of drama, and we were heading back to the grid for the quick restart procedure not long after. How would the start shuffle the pack second time around?

Mir got the perfect start from pole, with Miller getting bogged down from third. Pol Espargaro powered away from the line well but ran slightly wide into Turn 1, allowing Miller to regain ground on the run into Turn 2 and 3. Miller, sporting fresh soft Michelin front and rears, was then leading. The GP20’s speed powered the Aussie through. Mir fought back on the exit but the Ducati rider held the inside line for Turn 6, with Nakagami one rider getting a bit beaten up at the start as the Japanese rider dropped to seventh.

Just like they were in the first part of the race though, KTM’s Oliveira and Binder were scrapping away in the fight for P4, with Dovizioso also up with the leading group. Miller then slammed in a 1:23.928 as the pace in the restarted contest heated up, with Mir second but the Spaniard on the same front tyre he’d used to pull clear of the field before the red flags – was it costing him?

With eight laps to go, Pol Espargaro set the fastest lap of the race. The KTM rider then made his move on Mir at Turn 3, before the number 44 was then clambering all over the back of Miller. Pol then attempted a pass up into Turn 1 but he was in deep and wide, allowing Miller to blast straight past and Oliveira and Mir to close in, the Portuguese rider now up into third.


The leading quartet was gapping Dovizioso and Nakagami, and then Dovi was wide at Turn 1 and then again at Turn 9 with six laps to go. It worked for a while as it was a lead group of seven, although Binder then lost touch as the South African ran wide at Turn 1 a lap later.

Pol Espargaro then took the lead from Miller at Turn 9 but he wasn’t able to pull the pin. Next, Mir was wide at Turn 4, allowing Dovizioso to grab fourth as Miller and Oliveira tagged onto the back of Pol’s RC16. The top five were close, but Mir and Dovizioso were dropping off slightly and ultimately couldn’t get in the fight in the final lap.

Heading onto that last lap, it all came down to two KTMs vs a Ducati: Pol Espargaro vs Miller vs Oliveira. Two riders chasing their first win, one chasing their first dry race win. It was Pol Espargaro who begun the lap in the lead and got a good run out of the first corner, but coming into the braking zone, the KTM went very defensive – maybe too defensive. That compromised his exit and Miller was all over him before managing to get alongside the number 44 and make the move stick into the tricky, downhill right-hander.

Miller held firm through the left-handers, but coming up was where the KTM rider was strongest. Pol Espargaro got the run up the hill and managed to slice back up the inside of Miller, meaning everything was going down – once again – to the final corner in Styria.

Getting a better run down into Turn 10, Miller braked late and the Aussie, of course, went for it. And he technically got it done as he got past the KTM – but both headed so wide, the door was wide open behind them. Enter wily Oliveira, who had been calmly stalking the pair, as the Portuguese rider blasted past the two errant machines and straight to the line for his first historic victory, in a historic race.

Miller held onto second to pick up his second Red Bull Ring rostrum of 2020, with Pol Espargaro forced to settle for P3, although it’s his first dry podium in MotoGP™ after an impressive ride at the front.

Mir came fourth and was a key victim of the restart, but it’s another impressive performance and haul of points for the Spanish sophomore. Dovizioso couldn’t make it two-from-two as the Italian crossed the line 5th, 1.4 from the victory, but the Italian closes the gap to Quartararo as they’re now three points apart. Another unfortunate victim from the red flag was Nakagami, who has to settle for P7 in Styria after looking odds on to picking up a maiden podium. Binder’s late Turn 1 run-off cost him a chance of a top six finish, the Czech GP winner crossing the line in P8, although four tenths clear of leading Yamaha rider Valentino Rossi (Monster Energy Yamaha MotoGP).

It was a difficult day for the Iwata factory with Viñales’ crash seeing the Spaniard take zero points from Styria. Quartararo’s P13 finish ultimately keeps him top of the standings, but the Yamaha riders will be happy to see the back of the Red Bull Ring and head for happier hunting grounds at Misano.

10th place went the way of rookie Iker Lecuona, who caps off a fantastic day for Red Bull KTM Tech 3 with his second top 10 on the bounce Danilo Petrucci (Ducati Team) and Aleix Espargaro (Aprilia Racing Team Gresini) finished just ahead of Quartararo, with Johann Zarco (Esponsorama Racing) – who started from pitlane in the first race and recently broke his scaphoid – and Franco Morbidelli (Petronas Yamaha SRT) completing the points.

It really was another Spielberg stunner, and a truly history-making day. Who would have predicted that? Three points between Quartararo and Dovizioso really spices things up heading to one of the Italian’s home tracks at Misano, and Miller isn’t far off either. From there down to ninth overall, there’s almost nothing in it in one of the most astonishing seasons we’ve seen.

A hard-earned two-week break now sees the paddock catch our breath before Misano World Circuit Marco Simoncelli awaits. Predict what will happen there at your own peril… but most definitely tune in!

Miguel Oliveira: “I’m very emotional, there’s so much I want to say but I won’t be able to. Just a big thank you to all the people who have believed in me, there are so many coming to mind right now but starting from my family at home, the team, my sponsors, the Portuguese crowd, thank you so much for your support. History today, for me and my country, and I couldn’t be happier to have done it here and the home of KTM and Red Bull.”