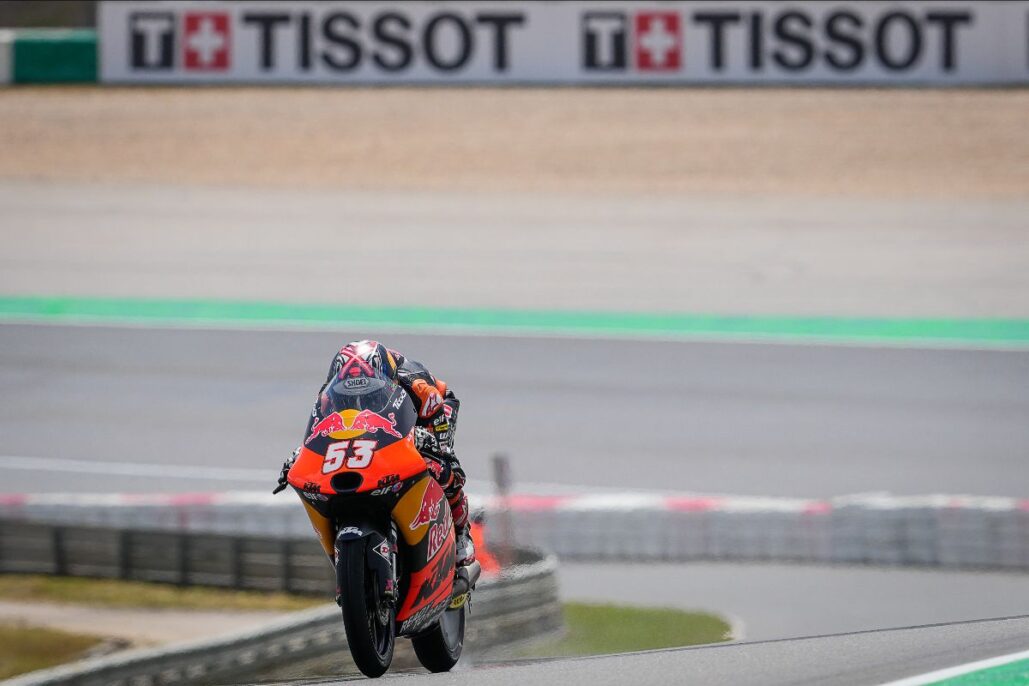 The Turkish rider goes from Q1 to pole, holding on by just 0.017 as Aji takes Indonesia’s best ever qualifying.

Red Bull KTM Tech3’s Deniz Öncü has taken a second career pole position after a stunning qualifying at the Grande Premio Tissot de Portugal, timing his final flying lap to perfection. Having come through a wet Q1 earlier, the Turk made the most of improving track conditions to take top spot as the chequered flag came out and, in doing so, denied both Mario Aji (Honda Team Asia) and Lorenzo Fellon (SIC58 Squadra Corse) debut poles.

Q1
Wet, and with a good number of fallers, Q1 threw up some surprises. That included some of the names in the session, with Championship leader Dennis Foggia (Leopard Racing) looking for a way through. He found one but he was second fastest, with Öncü topping the timesheets by half a second. Stefano Nepa (Angeluss MTA Team) was third quickest, with Josh Whatley (VisionTrack Racing Team) putting together an impressive performance to move through to Q2 for the first time.

Q2
Öncü, Aji and Fellon took turns at leading Q2 throughout the course of the damp 15-minute session, swapping and changing lap after lap. But it was VisionTrack Racing’s Scott Ogden who sat at the top of the timesheets as the clock ticked to zero. However, in double heartbreak, the Brit’s lap was cancelled for yellow flags and Öncü then went fastest with a 2:03.955.

Indonesia’s Aji looked to threaten Öncü for pole moments later, but he fell short by just 0.017 seconds and was forced to settle for a second front row start of his rookie season. The pair will be joined there by Frenchman Lorenzo Fellon, who clinched a debut front row start just two weeks on from his first World Championship points.

The Grid
Behind that front row, fronting Row 2 comes CFMoto PrüstelGP’s Carlos Tatay, followed by Leopard Racing’s Tatsuki Suzuki and Valresa GasGas Aspar’s Sergio Garcia. Garcia, sat second in the Championship and on pole in the 2021 Algarve GP, salvaged a second row start despite crashing three times during Q2. It’s even his second best qualifying of the year.

SIC58 Squadra Corse’s Riccardo Rossi ended up seventh on the grid, over a second adrift of Öncü. The Italian will line-up one place ahead of Ogden, who, despite claiming a career-best result, will no doubt be frustrated after showcasing pace good enough for the front row. Joining the pair on row three will be Valresa GASGAS Aspar Team’s Izan Guevara, with Ayumu Sasaki (Sterilgarda Max Racing Team) completing the top ten – just ahead of former podium finishers at the track Andrea Migno (Rivacold Snipers Team) and Foggia, the Championship leader.

Moto3™ are first out on Sunday at 11:20 (GMT +1), with a long, potentially dry race ahead. Make sure to tune in for another rollercoaster race!

Deniz Öncü: “Honestly, the weekend wasn’t going as planned. I was struggling a lot in the wet and cold conditions. I never found a way to be fast in Free Practice, so for qualifying I just got my head down and pushed. Then in Q1 I was first, which I didn’t expect. So, I said ‘okay, let’s do the same in Q2’ and exactly the same happened: pole position. This is for the team, they’ve worked a lot. It’s a great result but let’s see tomorrow because the race is more important.”