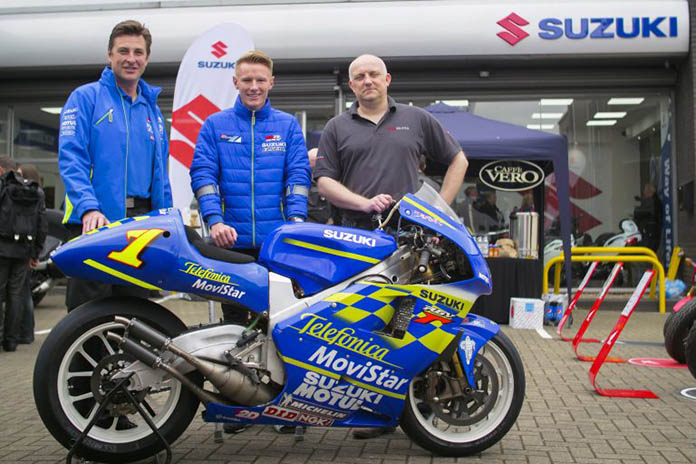 Suzuki GB continues to expand its dealer network, with Via Moto in Sheffield and Youles Motorcycles in Blackburn both hosting customer open days to mark the acquisition of the Suzuki franchise.

Both events saw Suzuki provide a number of display bikes and additional test ride machines. On display were Barry Sheene’s 1976 and 1977 world championship-winning RG500s, along with Kevin Schwantz’s 1993 RGV500 and Kenny Roberts Juniors’ 2000 RGV500, both of which also took world championship glory in their respective years. Suzuki’s purpose-built events unit attended both events, and hosted a number of test rides, providing additional machines such as the all-new GSX-R1000 and the new V-Strom 650 and V-Strom 1000 adventure bikes for customers to try.

Hosted on September 23, the Via Moto open day also saw reigning National Superstock 1000 champion and Bennetts Suzuki British Superbike rider Taylor Mackenzie in attendance, plus a 10% discount across the range of clothing and accessories. Youles Motorcycles hosted its open day on October 7, and were able to display the new GSX-R125 and GSX-S125 for the first time, following their European press launch at Silverstone.

Rob Mercer, Youles Motorcycles general manager, said of taking on the Suzuki franchise, “We are extremely excited to be working with Suzuki. They have a great range of bikes from learner machines right through to TT-winning superbikes, and with such a depth of range there really is something for everyone. Also, the support we have received from Suzuki has been fantastic and the opportunity to view the championship-winning bikes and new GSX-R125 and GSX-S125 proved to be a big draw with our customers.”

Via Moto’s Matthew Gilder, commented, “The open day in September was a brilliant way to mark the opening of the new Suzuki showroom, and having such iconic bikes on display added another element to the day for all of our customers. It’s not very often you get to see bikes such as Barry Sheene’s world championship-winning machines up close. We’re really looking forward to working with Suzuki and are delighted to be taking on the franchise. It’s a brand with a lot of history and a loyal customer base, and with so many new models this year, an extensive range.”

Suzuki GB national sales manager, Jonathan Martin, said of the new appointments, “With both Via Moto and Youles Motorcycles we have dealerships that both have enthusiastic and knowledgeable teams of sales staff and workshop technicians. That level of enthusiasm and passion was demonstrated at theirrecent open days. Via Moto and Youles Motorcycles will service key areas for Suzuki in the UK, and we’re looking forward to a successful working relationship together.”