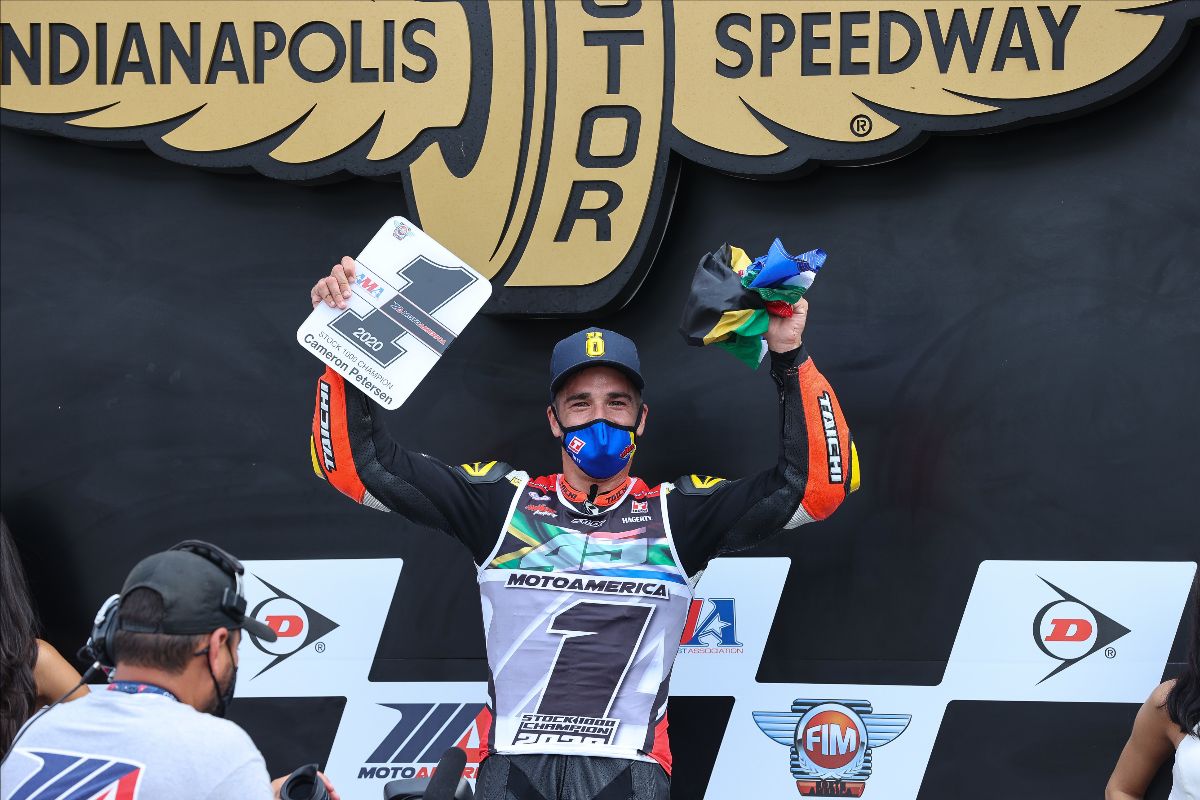 Two more MotoAmerica Championships were decided at Indianapolis Motor Speedway on a cloudy Saturday with Cameron Petersen earning the Stock 1000 crown while Rocco Landers wrapped up his second championship of the 2020 season in Twins Cup.

Petersen won his title with a second-place finish to Travis Wyman in Stock 1000 with Landers taking his title via his eighth win of the year in Twins Cup.

Richie Escalante didn’t wrap up the Supersport title on Saturday at The Brickyard, but he’s close. Escalante won his 12th race of the season with his main title rival Sean Dylan Kelly crashing out of the race early.

In addition to his Twins Cup race, Landers also scored a victory – his 12th of the year – in the Liqui Moly Junior Cup race.

Altus Motorsports Suzuki rider Cameron Petersen clinched the 2020 Stock 1000 Championship in a race that he appeared to win, but he was docked .4 of a second due to a sporting infraction, which dropped him from first to second in the final result. Meanwhile, Travis Wyman Racing BMW rider Travis Wyman, who had caught up to Petersen in the race, overtook him, and led the race briefly until Petersen passed him, inherited the win for his first Stock 1000 victory of the season. Third place went to Tango Racing Kawasaki rider Maximiliano Gerardo, the Uruguayan rider notching the first MotoAmerica podium of his career.

“I can’t even explain it,” Petersen said when asked to describe his feelings about winning his first MotoAmerica Championship. “Even hearing you say that kind of brought a lump to my throat. It means so much to me. This is my life. Obviously, my goal is to be a Superbike champ and hopefully one day get in the World Championship. Just being able to hold this number one board is pretty special. It’s something I’ve dreamt of my whole life. It wasn’t easy. It hasn’t been an easy fight. Every year I’ve been here, I’ve had to get on a different team, different bike. It seems like every year kind of halfway through the season I start finding my feet. This year, I just decided to ride the Stock bike and see if I could find my feet again a little bit. I think I lost my way a little bit there a few years ago just kind of getting caught up in the whole Superbike thing. This year has probably been the best thing for my career. I’ve had so much fun riding my bike every single weekend. I look forward to coming to the track. The vibe in the team, everything is incredible. I honestly can’t explain the feeling of being a champion, but hopefully this isn’t the last number-one board I’ll hold up. Just all off-season going to put my head down, go to work and hopefully something good comes up for me next year. I want to show people that I can do this in the Superbike class, as well.”

The SportbikeTrackGear.com Roadracingworld.com Suzuki rider started from the pole and rode another one of his signature flawless races to cross the finish line with a gap of nearly six seconds over second-place finisher Hayden Shultz who was aboard his Hayden Schultz Racing Yamaha. Third place went to 1833CJKNOWS Yamaha rider Kaleb De Keyrel, who was in a fierce battle with Schultz for second place until he mistook the white flag (signifying one lap to go in the race) for the checkered flag and let up on the throttle after the crossing the start-finish line. The mistake enabled Schultz to take the position and pull away on the final lap with De Keyrel unable to catch him before the checkered flag flew.

Reviewing his Championship season, Landers said, “Road America 1 was a little bit rough for us, and at Road America 2, we got in gear a little bit and started putting better results together. We had a bit of hiccups until Atlanta, and I honestly didn’t think it was going to happen because of the Red Bull (MotoGP Rookies Cup) schedule and COVID-19. COVID affected the Red Bull schedule to where I was going to end up going to every round except Laguna, I believe. But I think 35, 37 wins, 43 podiums, three championships in two years is pretty awesome. My team has worked all year putting a great program at every single round, getting better and better. Thanks to everyone who has supported me this year. It’s been awesome.”

Liqui Moly Junior Cup – Who Else But Landers?

Recently re-crowned, two-time Liqui Moly Junior Cup Champion Landers continued his winning ways and notched his 12th-consecutive class victory of the season. The 15-year-old phenom started from the pole, and as has been his method almost all season long, he built a gap at the front and won the race by just a little more than two seconds at the checkered flag. Second place went to BARTCON Racing’s Dominic Doyle, which was the South African’s ninth podium finish of the season. The battle for third place was hotly contested, and Quarterley Racing/On Track Development rider Ben Gloddy took the final spot on the podium in a photo finish at the stripe.

“I made a small mistake in the first few laps where I clipped one of the curbs pretty late further up than I normally would going into the first esses over there,” Landers said. “I lost a little bit of time and just tried to put my head back down, tried to make clean laps as much as possible, and they were pretty consistent, within a few tenths. I for sure thought Dominic (Doyle) was going to be up there the entire race, but I just tried to put my hammer down and tried to drop as many fast laps as I possibly could. My dad and Barry Wressell at KFG Racing suspension, we’ve been working so hard this weekend. Made a big change yesterday to today. The thing felt so much better. It’s been working out great this year. I’m stoked.”

HONOS Kawasaki rider Richie Escalante moved even closer to clinching the 2020 Supersport Championship with his victory in Saturday’s race one at The Brickyard. For Escalante, it was his 12th win this season.

Early in the race, M4 ECSTAR Suzuki’s Sean Dylan Kelly crashed out of the lead, unhurt, which handed the lead to Celtic HSBK Racing’s Brandon Paasch. Escalante eventually overtook Paasch, and then MESA37 Racing’s Stefano Mesa, who is competing in Supersport for the first time this season in addition to Stock 1000, closed in on Paasch and nipped him at the finish line for second place, with Paasch completing the podium in third.

“I always start the weekend, for sure, very focused, but I know it’s a very difficult day, especially for thinking about the championship,” Escalante said. “I’m a little bit nervous at the start of the race. I start very bad, so I need to pass riders in the first laps very aggressive. Then I have one moment in the last corner a little bit one high-side, so almost crashed. Then I said, ‘Relax, it’s 16 laps, a pretty long race.’ I see Sean (Dylan Kelly) crashed so more relaxed. I passed Brandon (Paasch). I know my rhythm is always very good so very happy with my pace today. Maybe a bit working a little bit more for tomorrow. I’m very relaxed right now on the championship. Thanks to my team. They did an amazing job this weekend, so I’m very happy.”