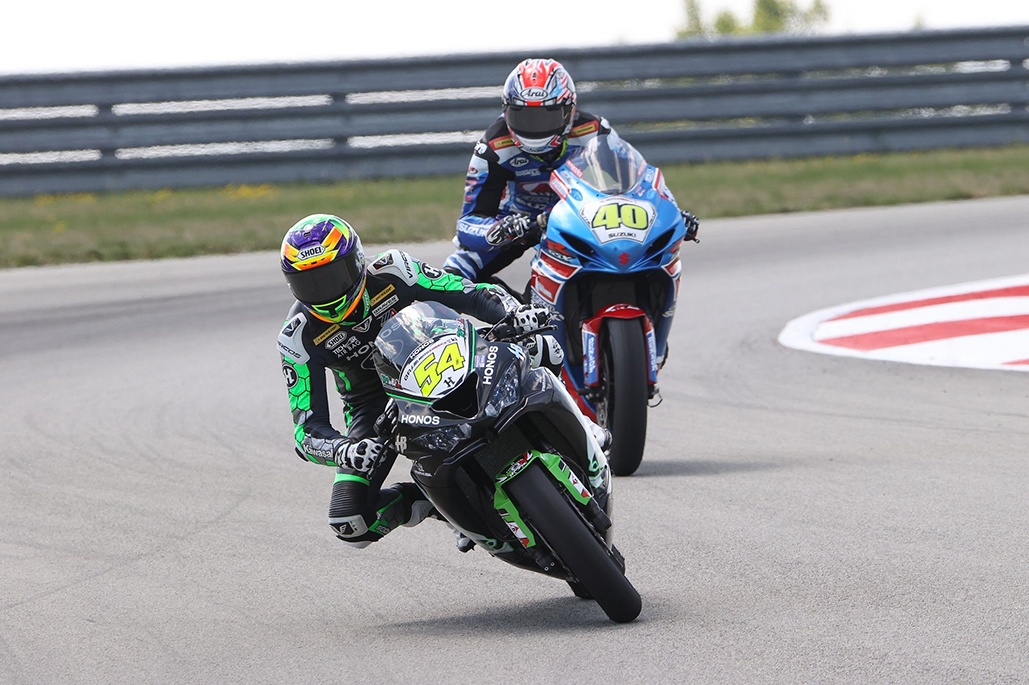 Cameron Petersen had a miserable weekend at Michelin Raceway Road Atlanta seven days ago with victory and his Stock 1000 Championship points lead stolen from him by mechanical problems on Sunday – a day after finishing second in race one when he was again thwarted by brake problems.

On Saturday at the Pittsburgh International Race Complex, Altus Motorsports’ Petersen put all that behind him to come out on top of a battle with class rookie Alex Dumas, the Liqui Moly Junior Cup/Twins Cup Champion coming of age with his second straight runner-up finish on the M4 ECSTAR Suzuki.

Rocco Landers, meanwhile, had it all his way in the Liqui Moly Junior Cup race on Saturday.

In the Stock 1000 race one, Altus Motorsports Suzuki rider Cameron Petersen notched his second win of the season in an event where he started from the pole. Petersen faced a strong challenge from M4 ECSTAR Suzuki’s Alex Dumas, the Canadian rider who recently celebrated his 18th birthday. Dumas took a turn in the lead, but Petersen got past him as the race drew to a conclusion to take the checkers with Dumas finishing second. HVMC Racing Kawasaki rider and championship points leader Corey Alexander had a quiet race in third and completed the podium.

“Having said that, he and Corey (Alexander) both stepped it up big,” Petersen continued. “That might have been one of the best races I’ve had in a long time, just getting to battle with guys like this. I think he came by with three laps to go. I was like, ‘All right.’ I knew he had some pace in sector two. Kind of helped me out a little bit. I was able to see what he was doing, and I was able to manage the gap. Then going into the last lap, I knew I had to be in front of him going into turn one, otherwise I probably would have gone immediately off the track, due to everything that’s going on. Looking forward to tomorrow. Can’t thank the whole team enough, Suzuki Altus Motorsports, Alpinestars boots, Arai helmets. Everybody that’s in my corner, I can’t thank you guys enough.”

The MotoAmerica Supersport class’s “big three” brought their triumvirate of dominance into PittRace, and in Saturday’s race one, HONOS Kawasaki rider Richie Escalante prevailed over M4 ECSTAR Suzuki’s Sean Dylan Kelly to take his sixth win in seven races this far in the season. Kelly finished as runner-up for the fifth time, and Brandon Paasch, also for the fifth time, finished third on the Celtic HSBK Yamaha YZF-R6.

Earlier in the race, Escalante, Kelly, and Paasch were challenged by Benjamin Smith aboard his North East Cycle Center Yamaha, the Pennsylvanian running as high as third until his bike developed a technical issue.

The opening lap of Saturday’s Liqui Moly Junior Cup race was marred by a big crash involving several riders, including Dominic Doyle, winner of the first three races this season. None of the riders was seriously hurt, but Doyle was unable to make the full restart. Polesitter Rocco Landers had another flawless race aboard his Norton Motorsports/Ninja400R/Dr. Farr/Wonder CBD Kawasaki. The 15-year-old Oregonian led the entire 10-lap race from start to finish and took the checkers by more than six-and-a-half seconds over Celtic HSBK Racing Yamaha’s Samuel Lochoff in second. Third place was a battle to the finish between Ben Gloddy and Gus Rodio, with Gloddy prevailing aboard his Quarterley Racing/On Track Development Kawasaki and grabbing the final spot on the podium.

“Great day to take the win,” Landers said. “I’m stoked on that. My first lap before the red flag, coming up the hill, I looked back and Sam was there, and I saw the red flag. I was like, ‘He (Doyle) must be down or something.’ Then I came back in and I saw he crashed. It was a pretty bad crash. I went back out and just focused on getting a good start, setting a pace and trying to break away. Sam was there for the first two laps, and I was like, ‘He’s rolling pretty good.’ I had a great race. I’m having a lot of fun.”