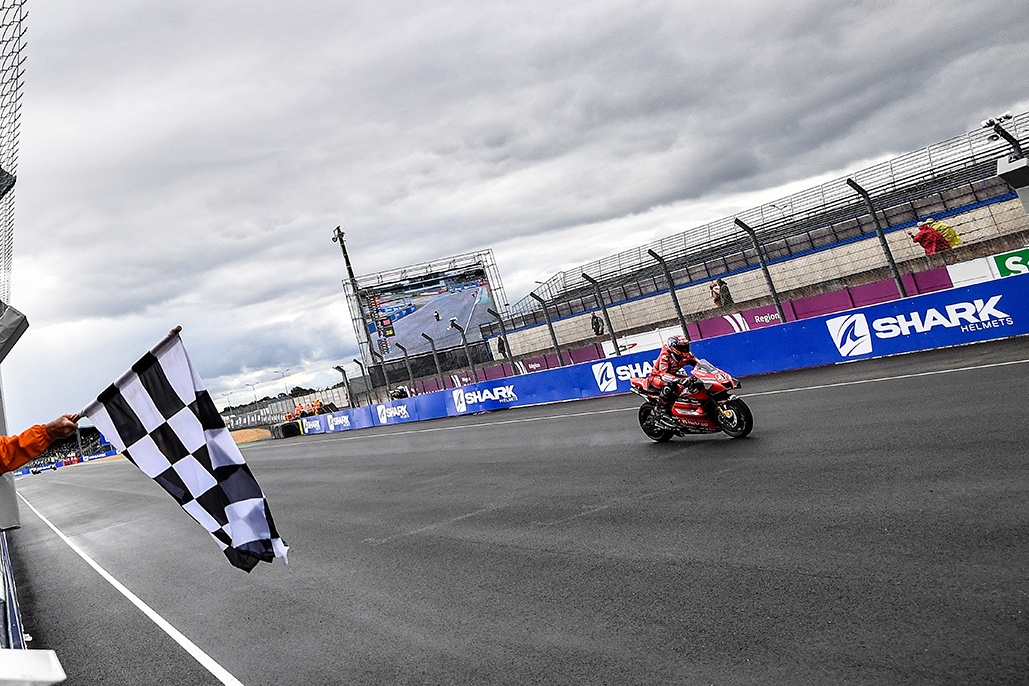 Ducati win at the venue for the first time, with Alex Marquez taking a maiden MotoGP™ podium – and Dovizioso the furthest title challenger forward by far in fourth.

Danilo Petrucci (Ducati Team) is a wet weather master, but until now the Italian was always the bridesmaid in the rain. But no longer, as the number 9 put in a stunner in the Shark Helmets Grand Prix de France to take his second premier class win and first in the wet. It’s Ducati’s first victory at the Sarthe circuit too, with Alex Marquez (Repsol Honda Team) marking his own first in second place as the rookie took a stunning maiden premier class podium – from 18th on the grid. Pol Espargaro (Red Bull KTM Factory Racing completed the rostrum in another impressive ride in the wet, pipping Andrea Dovizioso (Ducati Team) as the Italian was forced to settle for fourth – but far outscored his key title rivals.

Jack Miller (Pramac Racing) took the holeshot, the Australian characteristically quick off the line, with Crutchlow swooping through trying to take the long way round. Polesitter Quartararo lost out as he dropped behind Miller, Petrucci and Dovizioso, but he was quick to try and fend off an attack from Pol Espargaro (Red Bull KTM Factory Racing). He did initially, but the drama early on Lap 1 turned more heads: Valentino Rossi (Monster Energy Yamaha MotoGP) skittled out, sending two crucial title contenders wide and dropping them right down the field: Joan Mir (Team Suzuki Ecstar) and Maverick Viñales (Monster Energy Yamaha MotoGP).

Back at the front though, it was Petrucci who’d taken over in the lead, the Italian looking comfortable ahead of compatriot and teammate Dovizioso as they got through on early leader Miller. The three had a couple of seconds in hand ahead of Alex Rins (Team Suzuki Ecstar), who had sliced his way through on Pol Espargaro to take over in the chase to catch the podium fight, but the Suzuki man was on a charge as Quartararo slipped backwards, Viñales continued his charge forwards and Mir remained relegated to outside the points as the latter two tried to recover from their early run off.

Pol Espargaro had Crutchlow for company, but soon there was another machine on the scene. Alex Marquez (Repsol Honda team) was showing incredible pace as the Spaniard caught and passed Crutchlow, and then he was homing in on Pol Espargaro – with fastest lap after fastest lap. And then all hell broke loose…

Rins, after catching the front group, had a nibble or two at Miller, before a few laps later the Suzuki man threw everything up the inside in a multi-buy for the lead – right after Dovizioso had taken over at the front. Dovi was shuffled back, contact ricocheted through the group and it was Petrucci who managed to emerge ahead, Rins second and Miller slotting back into third after running off and holding up his hand to give the advantage back.

And then there was more: a puff of smoke from the rear of Miller’s Ducati saw the Aussie forced to sit up and he was suddenly out with a mechanical – and then Rins suddenly slid out of contention. That shot of sudden drama left Petrucci with a couple of seconds in hand at the front, Dovizioso in second and Alex Marquez now up into third as the impressive rookie had sliced through on Pol Espargaro. Miguel Oliveira (Red Bull KTM Tech 3) was close behind too, with the podium far from decided.

The gap to Petrucci was coming down, but Marquez was also right on Dovi. And sure enough, the number 73 picked his moment to perfection and sliced through – then immediately starting to make a gap back and catch Petrucci. The laps were running out, but the rookie was on an almighty charge.

Pol Espargaro struck to take third from Dovizioso soon after, before the Italian found himself in a battle with Miguel Oliveira as well. Onto the last lap just ahead though, it was 1.2 seconds from Petrucci back to Marquez, the rookie taking a good chunk of tenths off but the time ticking down. And the number 9 in the leading was holding firm, perfectly poised on the way to a second Grand Prix win…

Ultimately, the Italian wouldn’t be caught as he crossed the line for Ducati’s first win at Le Mans, his second premier class win and a huge boost of confidence after a difficult season. Alex Marquez kept it upright to get the incredible return for his stunning pace – having only ridden in the wet on Friday – with Pol Espargaro holding Dovizioso at bay.

Oliveira ended up with his hands full in the fight for fifth, and some late race pace from home hero Johann Zarco (Esponsorama Racing) saw the Frenchman mug the Portuguese rider to end the race as top Independent Team rider in fifth. Takaaki Nakagami (LCR Honda Idemitsu) took seventh and was the second Honda home as Cal Crutchlow crashed out, with Stefan Bradl (Repsol Honda Team) in P8. And then came the three who begun the race on top in the title fight…

Fabio Quartararo won the tight, tight tussle for ninth as the Frenchman managed to fend off 2021 teammate Viñales late on, but it was a three-way scrap to the absolute last as Viñales then also managed to beat Mir to the line by almost nothing. The result? Quartararo extends his Championship lead to ten points ahead of Mir, and Dovizioso leapfrogs Viñales into third overall…

Brad Binder (Red Bull KTM Factory Racing) was the next man over the line in P12 after a tougher first race in the wet for the South African, with Francesco Bagnaia (Pramac Racing) taking P13. Aleix Espargaro (Aprilia Racing Team Gresini) was 14th, was Iker Lecuona (Red Bull KTM Tech 3) completing the points and those classified in France.

That’s it from a dramatic Le Mans, and now we head for the very different MotorLand Aragon. Back to home turf for many and with some chances lost in France, the title fight remains incredibly tight – so don’t miss another dose of MotoGP™ next weekend!

Danilo Petrucci: “It was I think one of the first times in my life I was disappointed to see rain on the grid because I expected to be fast in the dry and after this morning I felt really good on the bike and I thought we could fight for the podium, I didn’t know if for the win, but then I saw the rain and I switched from medium to soft on the rear at the last minute… but then I immediately wanted to stay in front, because I wanted to stay far from the problems, and then I saw at the beginning we were three Ducatis, and then Rins coming fast… fortunately we have fans here and screens so I could see it. Then Dovi tried to pass me, we were close to each other but I thought there were too many behind so I immediately passed him again, but then I said come on risk a bit! I tried to push and made a gap but I had a big moment at turn 4, I stayed up but then I saw Alex coming very fast, and I said come on push you can’t lose this race! And I was able to win! It’s incredible to come back on the top step.”