Philipp Oettl’s (Sudmetal Schedl GP Racing) FP1 time was enough to keep him at the top of the combined timesheets on the opening day in Moto3™ at the Monster Energy Grand Prix České republiky, however the German was unable to improve his time in FP2 – a session that saw Kazuki Masaki (RBA BOE Skull Rider) go fastest with a 2:09.288, 0.043 ahead of second place Aron Canet (Estrella Galicia 0,0) and 0.056 quicker than Nicolo Bulega (Sky Racing Team VR46).

The biggest headline of the day, however, was a crash for the unlucky Jorge Martin (Del Conca Gresini Moto3). An FP1 crash at Turn 10 resulted in the Championship leader fracturing his left radius, which means he misses the remainder of the Czech GP as he flies back to Barcelona for surgery.

Back at the front, Oettl ended FP2 in P10, 0.602 behind Masaki who was down in P18 after FP1, but an improvement of nearly 1.5 seconds sees him sit just 0.094 off the German in second on the combined timesheets. Canet ends Friday in Brno as the third fastest rider after a strong day at the office, finishing fourth in FP1 and second in FP2, with Bulega fourth on the combined times.

Lorenzo Dalla Porta (Leopard Racing) rounds out the top five after finishing FP1 in eighth; the Spaniard finished fourth in FP2 to go into Saturday 0.189 off the top spot. Fabio Di Giannantonio (Del Conca Gresini Moto3) is sixth fastest overall, improving from P11 in the morning, with Adam Norrodin (Petronas Sprinta Racing) a solid seventh quickest on the combined timesheets – jumping up from P15 in FP1.

The lightweight class will be back on track for FP3 on Saturday at 09:00 local time (GMT +2), with qualifying kicking off at 12:35 local time. 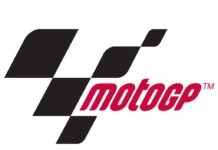 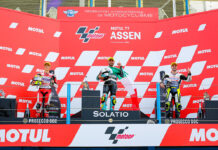 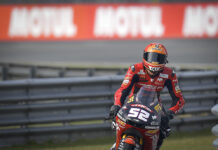 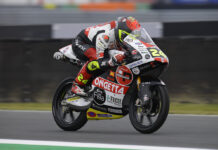 Suzuki fends off Binder by less than a tenth on Friday 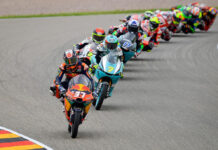 Acosta vs Assen: Moto3 takes on the Cathedral