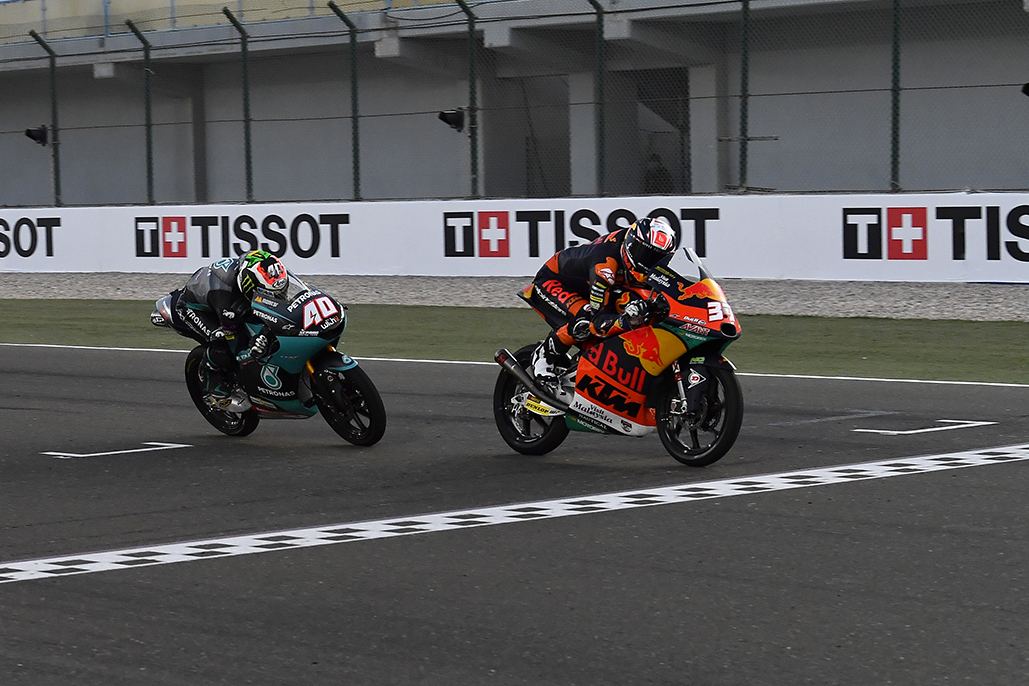 A podium on debut is impressive. A win from pitlane second time out? That’s a Moto3™ first, and an imperious way to announce your credentials…

From pitlane to the top step had never been done before in Moto3™, but it has now. A stunning ride from rookie – yes, rookie – Pedro Acosta (Red Bull KTM Ajo) saw the Spaniard put in the work from pitlane reeling in the freight train, fight his way through it and then pull the pin on the final two laps to just escape the clutches of Darryn Binder (Petronas Sprinta Racing) and take his first ever win in imperious style. In the wake of the breakaway, Niccolo Antonelli (Avintia Esponsorama Moto3) won the war for third as the Italian got back on the box for the first time since his win at Jerez in 2019.

Initially it was Gabriel Rodrigo (Indonesian Racing Gresini Moto3) off out front, but Binder struck quick to take the lead on Lap 1, somewhere the South African is becoming more and more comfortable. It was a huge freight train, however, with Acosta 10 seconds off the lead as the seven riders in pitlane got out on track and the melee only just beginning. Tatsuki Suzuki (SIC58 Squadra Corse) led next, with Kaito Toba (CIP Green Power) getting in the mix alongside Andrea Migno (Rivacold Snipers Team), teammate Filip Salač and Qatar GP winner Jaume Masia (Red Bull KTM Ajo).

The first drama then hit for John McPhee (Petronas Sprinta Racing) not long after as the Scot got contact from rookie Izan Guevara (GASGAS Gaviota Aspar Team), but he got back into the freight train although outside the points.

On Acosta watch, the Spaniard was doing the majority of the legwork to catch the leaders, followed by fellow pitlane starters Sergio Garcia (GASGAS Gaviota Aspar Team) and Romano Fenati (Sterilgarda Max Racing Team) as the three took huge chunks out of the gap in between themselves and the huge group at the front. It was clear they’d make it, but when?

The answer was: seven laps to go. Acosta arrived and immediately began to conquer too, making short work of the first few riders as he sliced his way into the top ten. And from there, he only pushed forward. By three to go, he’d cracked the top five, and over the line to start the last lap the number 37 had muscled his way into the lead. Could he hold it? He could.

Pulling the pin and pushing to the limit, the rookie sensation kept his head as the Jaws music intensified from Binder; the South African gaining and gaining round that final lap. Over the line there was almost nothing it in, but history was made: the first ever Moto3™ winner from pitlane. If last week’s debut podium was impressive, the word for this week’s debut win is a few miles further into superlatives.

For Binder, second is a solid results as he retains his 100% podium record this season, the South African looking unflappable and like a serious contender. Behind him, Antonelli fought through on the final lap too, going from sixth to third as he pipped Migno, Toba and Izan Guevara.

There was then a small gap back behind the rookie number 28, with some serious drama ricocheting for key frontrunners: Jeremy Alcoba (Indonesian Racing Gresini Moto3) got it all wrong at Turn 1 and hit Binder, although the South African escaped, but Alcoba’s optimistic move then saw him swipe out McPhee on the way to the gravel. Riders ok, moods very much not and the ensuing scuffle earning both pitlane start and time penalties for Portugal, as well as a fine each.

Ayumu Sasaki (Red Bull KTM Tech 3) got some redemption after a difficult qualifying as he took seventh at the head of the next group, the Japanese rider impressing despite what was deemed a racing incident with Salač that saw the Czech rider crash out. Ryusei Yamanaka (CarXpert PrüstelGP) took eighth and was only hundredths off Sasaki, losing out to his compatriot at the line but taking his best GP finish by some margin. Almost equally close came the man in ninth, Masia, after some drama saw the Spaniard tangle with Rodrigo and both get sent wide.

A tenth behind Masia came Fenati as the veteran turned pitlane into a top ten, just getting the better of another solid performance from Jason Dupasquier (CarXpert PrüstelGP). Tatsuki Suzuki got pushed down to P12 in the end, wheading another group. Rodrigo was only a single thousandth back in P13, with Maximilian Kofler (CIP Green Power) and Yuki Kunii (Honda Team Asia) completing the points by tiny margins too.

That’s a wrap on the lightweight class at Losail. A dramatic, tumultuous rollercoaster for the majority, it was another incredible show and there’s one man in the spotlight as we head for Portugal: Pedro Acosta. And remember… now we’re heading to tracks he knows…

Pedro Acosta: “I don’t know how I did it! When you work with the best guys, you can do this. The work is easy, and yesterday I felt a bit dark after the penalty but this morning I got up and I told my assistant, ‘mate, we can do it. On Lap 10 more or less I can be in the group’. And I’m here! I can only thank my family, my assistant and my trainer, and my team, because without everyone I couldn’t be here!”