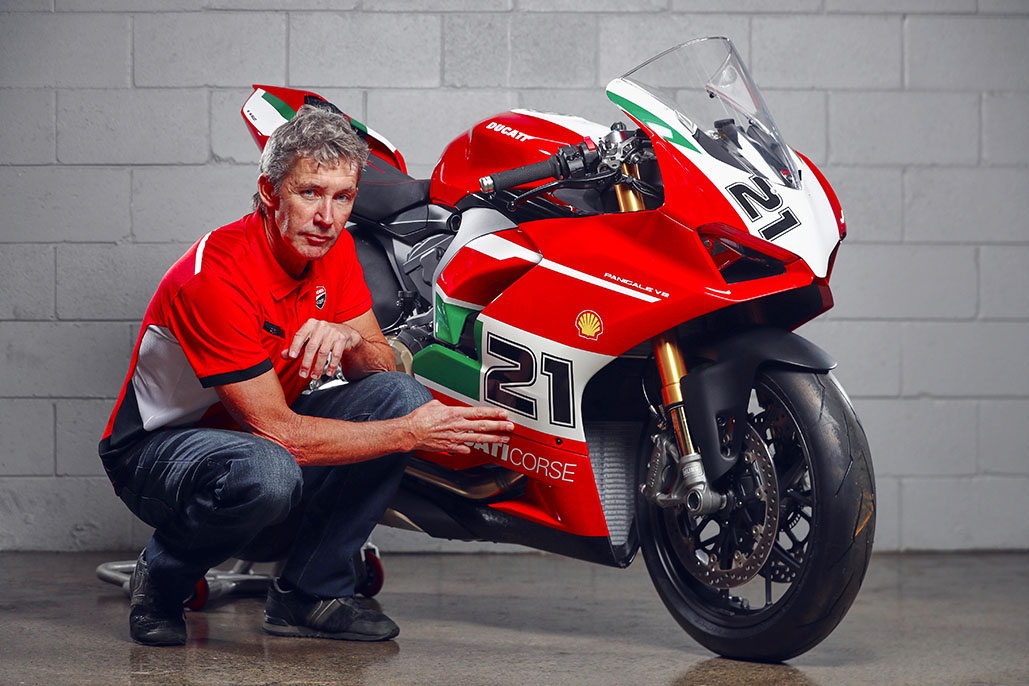 Production of the Panigale V2 Bayliss 1st Championship 20th Anniversary, the numbered series motorcycle that Ducati has built to pay homage to the legendary career of Troy Bayliss twenty years after his conquest of the 2001 Superbike World Championship, has begun at the Borgo Panigale factory. Starting from October the bike will be available in the Ducati network dealerships.

This unique model immediately entered the hearts of Troy fans around the world. In fact, since the first days after the presentation at the WSBK race in Assen, the bike has been ordered by many fans, already covering a large part of the production for the coming months.

Presented in an episode of the 2022 Ducati World Première that featured Troy Bayliss as a protagonist, the “Bayliss 1st Championship 20th Anniversary” version is made starting from the base of the Panigale V2 and is characterized by the celebratory livery, whose graphics are inspired by those of the 996 R which in the 2001 season powered the Australian rider to the first of his three world titles, revisiting its colours and cuts. Ducati red is the main colour of the bike and joins green and white in a tribute to the Italian character of the Bologna-based motorcycle manufacturer, while the iconic #21, Troy Bayliss’ race number, and the Shell logo, which visually strengthen the link with the racing bike, stand out on the sides and the front. Troy’s autograph is reproduced on the fuel tank, while the billet aluminium triple clamp shows the name of the bike and the progressive numbering of this unique model.

To make the bike even more effective in track riding, Ducati has chosen to equip the Panigale V2 Bayliss 1st Championship 20th Anniversary with Öhlins components. The NX30 front fork and TTX36 rear shock absorber guarantee maximum smoothness and are designed to achieve the best performance on track, with a set-up that makes the bike more precise and offers the rider greater feeling and greater support in all riding phases. The steering damper, thanks to the adjustments it is equipped with, allows you to customize its calibration by adapting it to the riding style and the characteristics of the circuit.

Compared to the standard version, the Panigale V2 Bayliss 1st Championship 20th Anniversary is also 3 kg lighter, thanks to the adoption of a lithium-ion battery and the choice of the single-seater configuration that explicitly recalls the look of the racing bike (passenger seat and footrests are available in the supplied equipment).

The equipment is completed by the sport grips, the silencer outlet cover in carbon fibre and titanium and the rider seat made by combining two different technical materials with double red stitching. Troy’s number 21 is embroidered on the saddle in white, and together with the two vertical green and red bands, makes up the Italian flag.

On the Ducati.com website there is all the information about the Panigale V2 Bayliss 1st Championship 20th Anniversary, while the dynamic video of the bike is available below and on the Ducati YouTube channel.