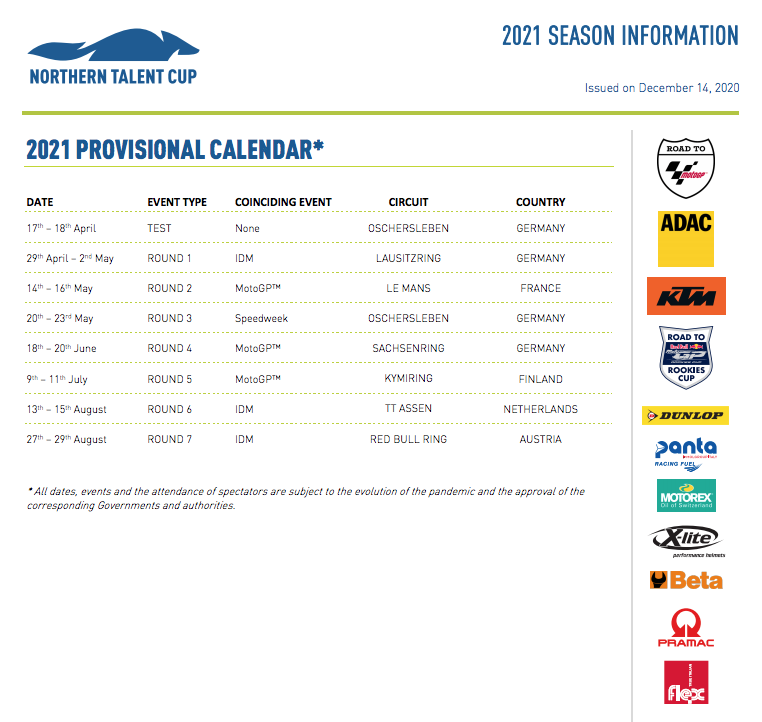 The 2021 provisional Northern Talent Cup calendar has now been announced. 14 races over seven rounds are planned, with the NTC set to race alongside MotoGP™, the IDM and Speedweek.

A pre-season test at Oschersleben gets action underway in April, before Round 1 sees competition begin later that month as the NTC races alongside the IDM at the Lausitzring in Germany. From there the Cup moves to France to take on Le Mans at the French Grand Prix with MotoGP™, ahead of a return to pre-season venue Oschersleben for Round 3 later in May with Speedweek.

Rounds 4 and 5 see the NTC return to the MotoGP™ paddock alongside the German and Finnish Grands Prix at the Sachsenring and KymiRing, respectively, before Round 6 pitches the NTC field against the legendary TT Circuit Assen alongside the IDM in the Netherlands.

The season finale then rounds out the year at the Red Bull Ring, again alongside the IDM, creating a seven-round, 14-race calendar across five countries.

All dates, events and the attendance of spectators are subject to the evolution of the pandemic and the approval of the corresponding governments and authorities.