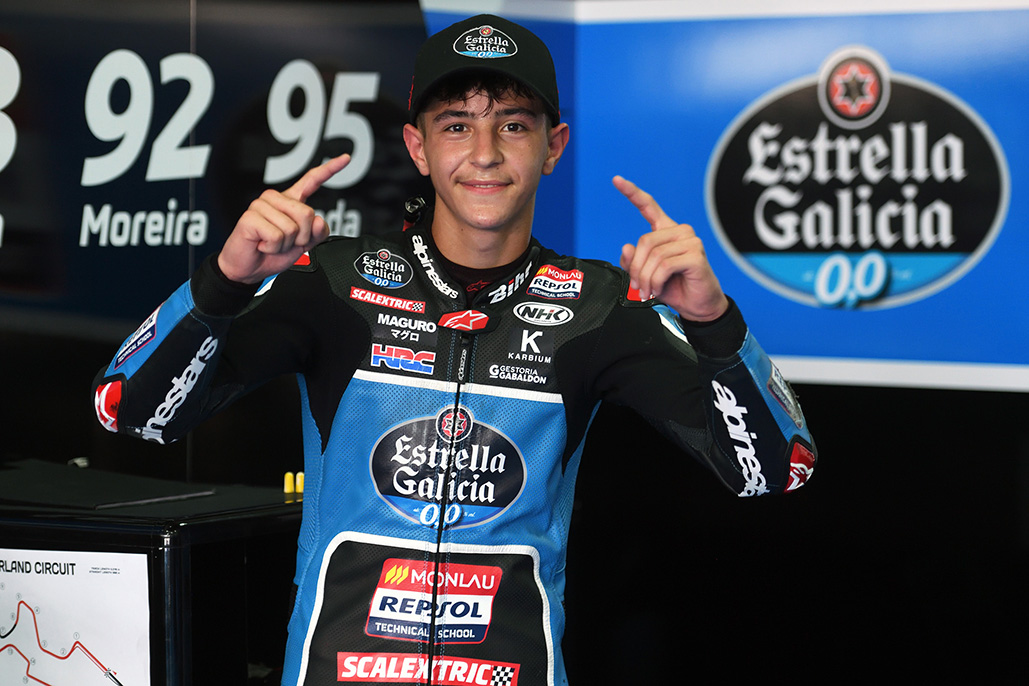 For the third consecutive round, FIM Moto3™ JWCh saw a first-time polesitter with Jose Antonio Rueda taking top spot. The 15-year-old was fastest on Friday and made full use of the faster track conditions in QP1 to take pole position by half a second with the young Spaniard hanging on despite a late crash in the afternoon session. Diogo Moreira (Team Estrella Galicia 0,0) lifted himself up to second overall with the fastest lap in QP2, while another surprise contender emerged in third as Marco Tapia (Leopard Impala Junior Team) earned his first front row start in the class.

Championship leader Daniel Holgado (Aspar Junior Team) will be one to watch from fourth with Takuma Matsuyama (Asia Talent Team) returning to form after a difficult round at Portimao, securing fifth on the grid. Ivan Ortola (Team MTA) looked in danger of starting towards the back after a technical problem ruled him out of QP1 but an impressive recovery in the afternoon saw him rescue P6 on the grid.

The fascinating Moto2™ Ech title battle could be in for a twist tomorrow with Alonso Lopez taking his first pole position since Valencia in May. All eyes were on his team-mate Fermin Aldeguer (Boscoscuro Talent Team-Ciatti), who could clinch the championship tomorrow, but the 16-year-old was forced to settle for second after crashing in QP1. Another pair of team-mates line up just behind with Adam Norrodin (Liqui Moly Intact SIC Racing Team) edging out Lukas Tulovic for his second front row start in succession. Xavi Cardelus (Promoracing) will be hopeful of another podium challenge from fifth with the second row completed by Aleix Viu (Pertamina Mandalika SAG Stylobike Team) who substitutes for Dimas Ekky Pratama this weekend.

In HETC, Xabi Zurutuza is well placed to challenge for a third straight victory after claiming his first career pole position. The title battle will take centre stage with nearest rival Hugo Millan (Cuna de Campeones) snatching second on the grid, setting the fastest Group B time of the day in the dying seconds of QP2. Rising Finnish talent Rico Salmela (Team Estrella Galicia 0,0) will start from the front row for the first time in third with Maximo Martinez (Team Honda Laglisse) another rider to watch from P4.